The Power of Policy: How MDLBeast’s XP Music Conference is driving innovation in the Middle East’s music industry…

The opportunity for the Middle Eastern music industry has never been greater. As Saudi Arabia continues its transformation and welcomes the world, new doors continue to open for the talent in the region. At the core of this music culture growth is MDLBeast’s XP Music Conference which, following a breakout year in 2021, has been confirmed for a second edition at the end of November 2022 in the Saudi capital, Riyadh.

XP is a three-day event with a conference and nightlife aspect, created to amplify music futures across the region, through workshops and panel discussions giving the chance for music industry experts and upcoming industry talents to have roundtable and networking opportunities. The conference welcomes uniquely diverse audiences including labels, publishers, talents, NGOs, GOVs, event companies, entrepreneurs, and music media.

The foundations of XP are built on four pillars; talent aims to establish careers in music for local and regional talent while providing new audiences for established artists; scene will map out opportunities to nourish the region’s emerging music industry; impact & social purpose creates dialogue around music, mental health, wellbeing, and diversity in the industry; policy is about making sure the right legislation exists to help build a strong and sustainable music ecosystem.

In the first edition, and true to the purpose of XP, the policy pillar was brought to life beyond just the on-stage activations with tangible action delivered to drive forward the regional music industry. At the event, MDLBeast confirmed an agreement with ESMAA, the Gulf-based music rights management organisation, to support regional and international music artists and composers by ensuring they receive payment for the use of their work played at all MDLBeast events; a regional first. Prior to ESMAA, there was no regional entity available to ensure music creators and rights holders were paid when their music was played in venues or in facilities in the Gulf region.

It’s this kind of policy action which can really support the growing music economy in the region and will be a major focus in the upcoming 2022 edition of XP. To elaborate further, we spoke to Vibelab partner and former Amsterdam Night Mayor, Mirik Milan, about his experiences at XP and where he thinks policy can have the biggest impact.

“Saudi Arabia has a creative vibrant community waiting for opportunities to express their creativity and this is where the importance of XP lies,” he says. “Through XP we can maximise the potential of local and regional talents in the Middle Eastern region. There is an evident need for creatives to come together to connect and collaborate. Due to the fact that the creative transformation is young in Saudi, policy development is required to give talent access to and ease to create events.

“Creating events is very important for promoters, talent, and creatives to have a space to express themselves. If we see policies in the right place and alleviated in some others, we will witness rapid growth in the music industry. This is a very special and unique moment where a heavily resourced country with a huge number of creatives opens to the progression of the music industry, I personally haven’t experienced anything like that before. There are benchmarks around the world that we are learning from and want to implement in Saudi.” 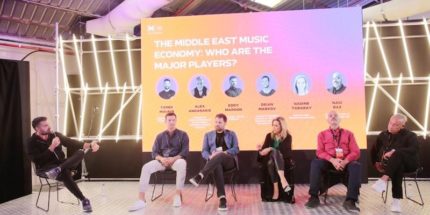 XP 2022 will look to build on the first edition which welcomed 150 local/regional/international industry experts from 26 countries. This included EDM giants Afrojack and Steve Aoki who led the discussion around paths to success, guiding principles for young talent and what it means to support aspiring DJ’s, producers and creators. 5,000 thousand people attended across three days and 52 sessions in 2021 with leaders in regional policy such as the Saudi Music Commission, Poparabia, ESMAA, the International Music Council, the Saudi Authority for Intellectual Property, and the French society of authors, composers and publishers of music, SACEM, playing significant roles.

Moving forward, XP’s programming will extend across 2022 with pillar activations in Riyadh, Jeddah and Dubai allowing conversations and developments to build over longer periods of time and bigger geographies ahead of the main conference event which will have differing night and daytime activities. This will include talking through the big policy conversations for the region, especially those around copyright, nightlife governance, intellectual property, and non-fungible tokens.

The number of concerts held in Saudi Arabia each year is set to rise by up to 600% on pre-pandemic levels, according to the kingdom’s assistant minister for tourism.

International superstars including Justin Bieber, Jason Derulo, A$AP Rocky and David Guetta performed in Jeddah for the post-race concerts after the Formula 1 Saudi Arabian Grand Prix earlier this month. A series of events are also taking place as part of Riyadh Season, which runs from October to March, and features the likes of Pitbull.

“People used to travel for nature, and then they started to travel for culture and now it’s about lifestyle,” she said, as reported by the National News. “It’s about meeting other like-minded people from across the globe and sharing what they are passionate about. The creative industries, such as music, is at the very heart of that.

“You are talking about 25% of the UK and US population, pre-Covid-19, of course, travelling to attend at least one music festival a year. This tells you where the world is shifting and where it is growing. So where we had 101 concerts in Saudi Arabia in 2019, before the pandemic, we are looking at increasing that number by 500 or 600% from 2022 on.”

“That event made us realise that there is an appetite both locally and internationally to experience Saudi Arabia and for Saudis to experience their own country,” she said.

While acknowledging the music scene was currently being “supercharged” by government bodies such as the General Entertainment Authority, she shared her hopes that in time, most events will be initiated by the private sector and Saudi creative communities.

“Because we are kick-starting and opening something that is an absolutely green field, there are a lot of regulatory reforms that need to accompany all these developing industries,” she said. “So this is why the government is playing a more proactive role at present while [understanding] there is a need for organic growth.”

One of the speakers at Saudi Arabia’s first music conference, XP, has shared his thoughts on how the region can further grow its creative economy.

Lutz Leichsenring, co-founder of Amsterdam-based consultancy VibeLab, will appear at the inaugural three-day event in Riyadh from 13-15 December, which is aimed at accelerating and amplifying the music business in the Middle East.

A leading authority on protecting night time economy, community and culture, Leichsenring advises the territory to take note of the best practices and tools employed around the globe.

“It is important to understand that the music scene is not going to be built the same way you build a tower,” he says. “There is not an actual blueprint to building a music scene, but I don’t see this as something very hard as it is rooted in the Saudi culture.

Billed as the “most forward-thinking gathering of music leaders in the region”, XP is being organised by MDLBeast in partnership with the Saudi Music Commission and will feature leading cultural representatives and music industry experts from around the world.

Through workshops, panel discussions and roundtables, networking opportunities, and music activations, XP plans to expand opportunities for music industry professionals of all backgrounds including artists, entrepreneurs, creatives and policymakers.

Organisers say the conference is built on four key pillars – talent, policy, scene and impact – that will help to amplify the region’s music industry. The full programme will be released in due course.

Asked how a country like Saudi Arabia goes about building a music scene, Leichsenring says: “Most cities, most countries will have had a scene of some sort. Perhaps it wasn’t visible, perhaps because it wasn’t allowed, but there would been something there and that was certainly the case in Saudi, with a genuine underground vibe.

“Now, these huge transformations are happening in the country and they’re creating the opportunity for what was previously underground to enter the mainstream. That’s being supported by government, so from the top down, but then there’s also the grassroots ‘bottom up’, organic scene which is now able to grow much much more.

“Further, there are now Saudi creatives returning home to be a part of these changes and they’re bringing experience they’ve gained all around the world back to their hometowns. This is amplifying the movement.”

Regional artists TamTam and Jeme have also been announced for the conference.

“I’m inspired by a lot of cities and Los Angeles is top, although it’s not the perfect role model for our region,” says TamTam. “I think the best angle would be to take away what’s best from different music cities, not just look at one city.”

“Creating public venues for artists to showcase their art and work will play a big part in supporting the music ecosystem as a whole,” adds Jeme. “Having more venues will create demand for artists, a huge market for promoters, booking agencies, production companies and so many other possibilities.”

Meanwhile, MDLBeast’s Soundstorm festival, which debuted in 2019, will return to Riyadh between 16-19 December, this time with a fourth day.