With Canada Day 2017 – aka Canada’s 150th birthday – fast approaching, StubHub has released data on its ten top-selling Canadian artists of the last decade.

National institution The Tragically Hip – whose recent farewell show was watched by a third of the country – place eighth.

While not, of course, a definitive list, StubHub is Canada’s (and the world’s) leading secondary ticket marketplace, so the eBay-owned business should have a fairly good insight into long-term market trends.

The modern state of Canada was confederated from three colonies of British North America – Canada, New Brunswick and Nova Scotia – on 1 July 1867. The 150th Canada Day (until 1982 called Dominion Day), which celebrates the anniversary of confederation, is tomorrow: 1 July 2017.

The record is currently held by the Rí Rá Irish pub in Las Vegas, which hosted a show lasting 372 hours and ten minutes from 1 October to 17 October 2014.

The new attempt, involving more than 380 bands, runs for 16 days at the Earl of Whitchurch pub (pictured) in Stouffville, Ontario, and is timed to coincide with 150 years since Canadian confederation.

The performers must have an audience of at least ten people at all times for the record to count.

The Stouffville show will raise money for 16 charities, including Sick Kids, the Markham Stouffville Hospital, 360 Kids, North Toronto Cat Rescue, Artscan Circle, Songs 4 Steffi, the Brain Tumour Foundation of Canada and the Family Navigation Project, as well as the Gord Downie Fund for Brain Cancer Research, founded by Tragically Hip frontman Downie, who has been diagnosed with terminal brain cancer.

Nearly 12 million Canadians – close to a third of the country – witnessed what is likely to be The Tragically Hip’s final live performance on Saturday night, as the beloved band bow out of touring following a terminal brain cancer diagnosis for songwriter-in-chief and ‘Canada’s unofficial poet laureate’ Gord Downie.

In addition to those who had tickets to the show, at the 6,700-capacity Rogers K-Rock Centre in Kingston, Ontario (prime minister Justin Trudeau among them), 11.7 million Canadians gathered in front of big screens and at viewing parties across the country to watch the Canadian Broadcasting Corporation (CBC)’s The Tragically Hip: A National Celebration, which showed the band’s emotional three-hour farewell set in full.

According to data from Numeris, the hometown show – which took the place of the CBC’s Olympics coverage – was also streamed 900,000 times worldwide.

Reporting from the concert, the final date of the 15-date Man Machine Poem tour, the CBC said concertgoers “treated the show like a landmark moment in Canadian history: Giant flags made their way through the crowd during the performance, and before the concert began, the audience spontaneously began singing [national anthem] O Canada, with nearly everyone rising from their seats”.

One audience member, Laura Coppola, called the show the “greatest single thing I’ve ever seen in my whole life” and the “best concert ever”.

The band, formed in 1984, have had nine number one albums in Canada and won 14 Juno awards – akin to the Grammys or Brits – with songs that draw on a uniquely Canadian experience, frequently with references to “[ice] hockey, geography, history and culture that are recognisable to Canadians but unknown to outsiders”, says Canadian writer Jordan Michael Smith.

The Live Nation-promoted Man Machine Poem tour, announced in the aftermath of Downie’s diagnosis, was marred by a national scandal over the number of primary tickets that appeared on secondary ticketing sites, leading to accusations that fans were being “shut out” of the farewell shows. IQ reported in the aftermath of the controversy that nine out of ten Canadians would support prison terms for bot-using ticket touts, and a third would abolish online ticketing altogether.

Watch The Tragically Hip perform ‘New Orleans is Sinking’ in Kingston below, courtesy of CBC:

Nearly 90% of Canadians support prison terms for touts caught using ticket bots – and a third would do away with online ticketing altogether, new research reveals.

A survey by market research firm Insights West of Canadians who have attended a concert in the last three years shows that 87% would support legislation, similar to that introduced recently in New York, that allows for severe fines or jail time for touts making use automated ticket-buying software.

The company also found that 28% of those surveyed had recently attempted unsuccessfully to buy tickets through a primary ticket outlet, and comes shortly the Canadian prime minister, Justin Trudeau, was forced to intervene in a controversy over the number of tickets for The Tragically Hip’s farewell tour that ended up on secondary sites. 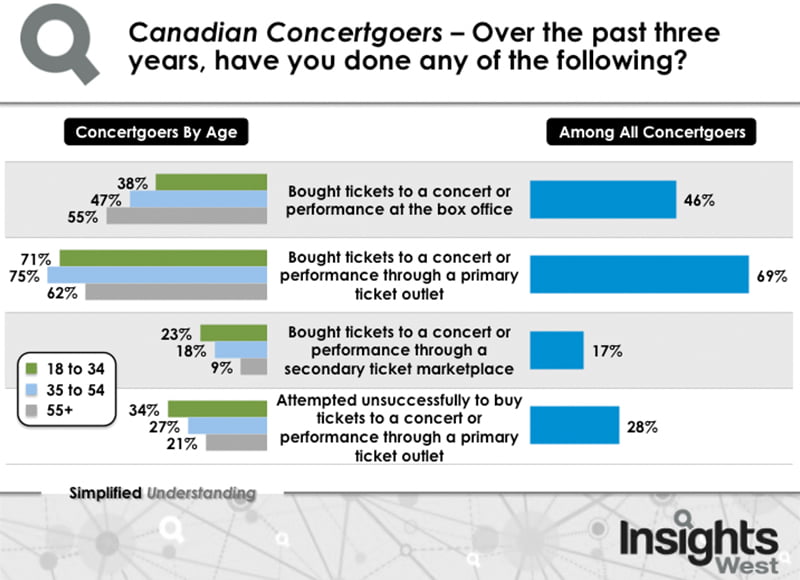 More surprisingly, almost a third of Canadian concertgoers (32%) – and a massive 43% of Quebeckers – would prefer to make ticket touting an impossibility by turning back the clock to a time when those wanting to go to a gig had to physically queue up outside the box office.

“Canadians have always been respectful of the queue,” says Mario Canseco, vice-president of public affairs at Insights West. “The country’s concertgoers are definitely showing their frustration when they lose out to a machine and have to pay more than they should to attend a performance.”