With new global restrictions now live on the use of Google AdWords by secondary ticketing sites, UK anti-touting campaign group FanFair Alliance has “unequivocally welcomed” the update to Google’s ad policies – but warned there is still room for improvement if the search giant is serious about cracking down on dishonest ticket resellers.

As required by Google’s new ‘event ticket reseller policy’, all major online secondary outlets – including Get Me In! and Seatwave in the UK, Ticketmaster Resale in Australia, SeekGeek, TicketsNow and Vivid Seats in the US and StubHub and Viagogo internationally – have put up notices making clear they are resale sites, and that prices may be above face value.

However, the same wording isn’t included in the ads themselves, meaning a Google search, for example, for “Kendrick Lamar tickets” still brings up scores of resale sites as the top results, with no indication they are not the primary sellers.

In a statement, FanFair identifies this lack of consistency as the “one crucial area” where more needs to be done, saying that while it welcomes Google’s “proactive involvement to bring further transparency to the ticket resale market”, the “largest resale sites still fail to make clear that they are secondary platforms, listing secondhand tickets.

“Given their continued prominence on search pages, the implication remains that these are authorised primary sellers or ‘official sites’. That is simply not the case. Until their ad messaging is amended, we suspect UK ticket buyers will continue to be misled.

“Until ad messaging is amended, we suspect ticket buyers will continue to be misled”

“This is something we look forward to discussing with Google and will urge them to act upon. Unless secondary ticketing sites are forced to ‘be honest’, the full consumer benefits of certification are unlikely to be achieved.”

Elsewhere in the UK industry, Mark Gasson, founder of primary ticket agency Gigantic, urges Google to go on step further in totally excluding secondary sellers from its search results. “While we welcome these changes that help to protect customers from being deceived when searching for tickets online, we would like to see this as the beginning rather than the end in the attempt to safeguard online ticketing,” he tells IQ. “In time, we would want to see all secondary sites excluded from all ticket searches and be restricted to pure secondary tickets searches.

“As it stands, some customers will still not see past the warnings and will end up paying more than they need to for their tickets. This not only misleads customers but also impacts on their potential spend on other concerts.”

“Google’s moves to ban misleading adverts from the secondary sites on its search engines is a welcome move, and a step in the right direction which should stop a lot of people being ripped off,” adds Dan Ealam, director of promoter DHP Family.

“Having seen firsthand the pain these unethical sites can cause consumers through false claims of being official, financial heartache for music fans and sometimes even selling non-existent tickets, we feel there is still some distance left to go, but this is a good starting point from Google.”

Analysing data from its Flyt URL-shortener, media-buying firm Dash Two found while 75% of clicks on ads for live events in the US come from mobile devices, 64% of the actual buying is done on desktop.

In its Save the Date report, which tracked sales primarily from Live Nation-owned ticket outlets, including Ticketmaster, TicketWeb and resale site TicketsNow, Dash Two concluded that “music ticket sales are still occurring more strongly on desktop, while discovery seems to be happening more on mobile”.

It also discovered (see infographic below) that while ticket sales occur throughout the week, the peak days are Thursday, Friday and Saturday. 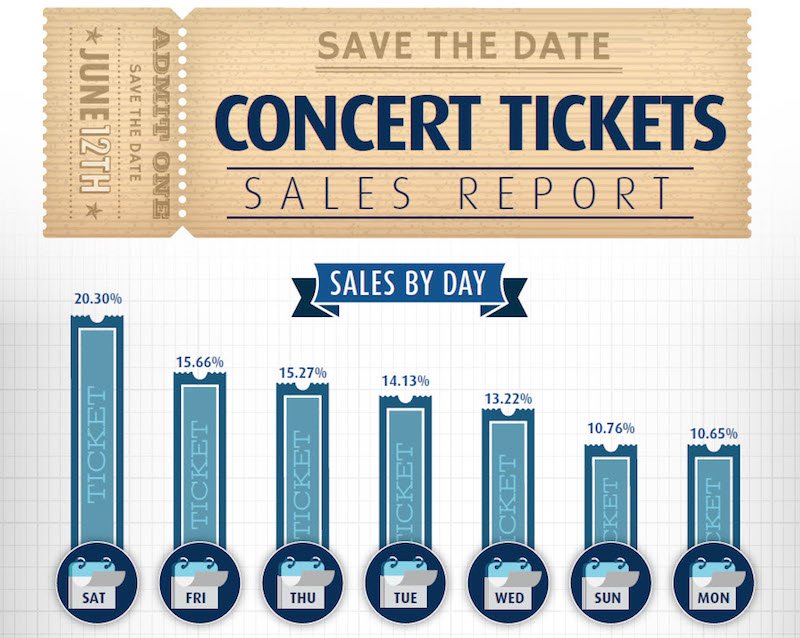