Tickets sold online in the Netherlands are now listed with all ‘unavoidable’ costs, such as booking and processing fees, listed upfront, following a successful intervention by the Authority for Consumers and Markets (ACM).

ACM in July warned the country’s leading ticket agencies – which, according to the International Ticketing Yearbook 2017, are Ticketmaster, Eventim, Ticketpoint and Paylogic – that all extra costs must be listed in the ‘base price’ of the ticket, giving them until 1 October to comply. ACM’s counterpart in Canada, the Competition Bureau, followed suit the following week, warning sellers they could face court action unless they ceased drip pricing online.

Under Dutch law, ‘avoidable costs’, such as optional extras or upgrades, may be displayed at a later stage in the booking process.

“ACM has established that the sector has turned a corner,” comments Bernadette van Buchem, director of ACM’s consumer department. “Trade organisations have played a positive role in that process.

“Consumers are now able to see at the start of the booking process what a ticket will cost them, including all unavoidable costs. This will enable them to compare prices better. Providers are able to compete more fairly on price.”

Potential customers are being put off buying concert tickets because of “incomprehensible” ordering processes and “ridiculous” hidden charges, according to a leading consumer protection group.

Examining the additional costs associated with purchasing tickets for 50 live events, Consumentenbond, or the Dutch Consumers’ Association, found that of the Netherlands’ three main primary ticket agencies – Ticketmaster, Eventim, Ticketpoint – only Ticketmaster lists details of extra charges at the beginning of the buying process. The association calls for “all unavoidable additional costs to be included in the ticket price, so consumers are not faced at the end of the ordering process with unexpected costs”.

Consumentenbond also asked a group of consumers for their experiences with buying tickets from the three outlets. One respondent called it “ridiculous that you are charged for ordering tickets over the internet, when the whole process is automated”, while another said they want to see ticket prices that “include everything”, such as service charges and credit card fees.

“Service? What service? I do everything myself!'”

By way of example, the association compared additional charges on e-tickets for shows by Paul Simon, The Toppers and the musical The Bodyguard, sold by Ticketmaster, Ticketpoint and Eventim, respectively. The Simon ticket had a service charge of €6.90, 10% of the total ticket price, while The Bodyguard fared slightly better, with a €6.85 service charge and €1.80 for ‘delivery’ for 9.6%. The Toppers show had the least extra charges overall, totalling 7.9% of the ticket cost. 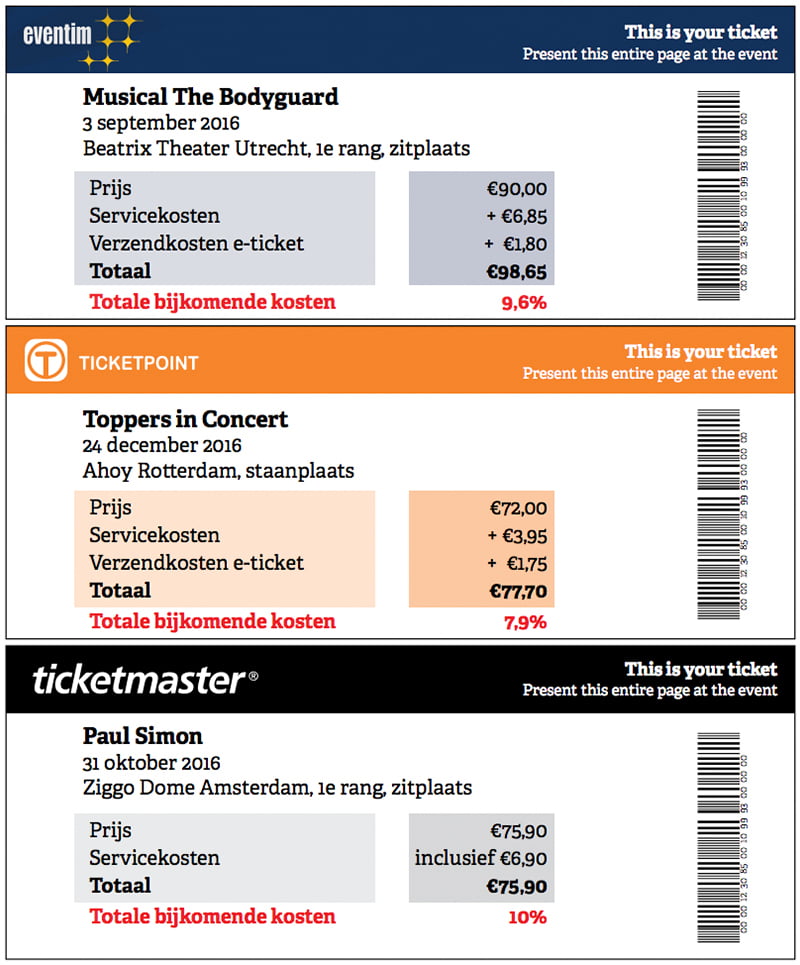 Although a spokesperson for Ticketmaster explains to Consumentenbond that service charges are its fee for selling the tickets, the latter says the current set-up is “incomprehensible”, with many consumers thinking: “‘Service? What service? After all, I do everything myself!'”

For Dutch speakers, the report can be read in full at the Consumentenbond website.