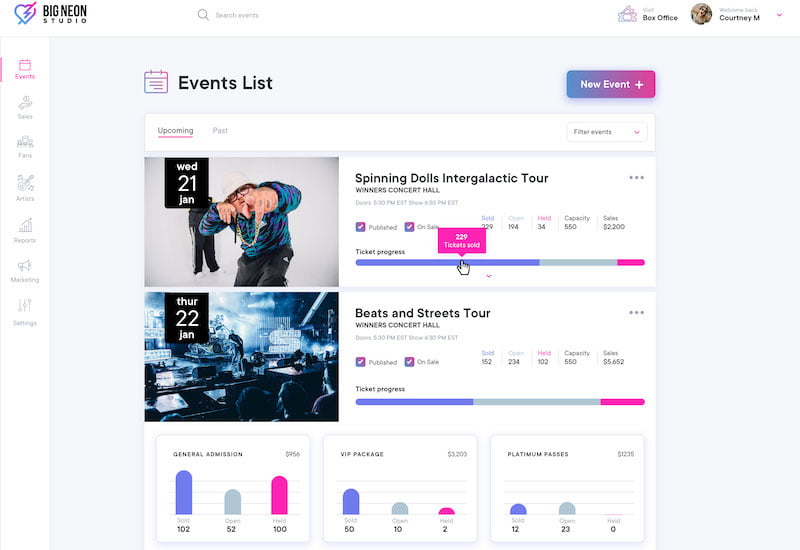 The nascent crypto-ticketing sector has welcomed last week’s acquisition of Upgraded by Ticketmaster, with reps for blockchain-based ticket sellers saying Live Nation’s interest proves the buzz around the technology is justified.

The ticketing giant announced on 18 October it had acquired San Francisco-based start-up Upgraded, whose digital tickets are protected by blockchain technology – a tamper-proof ‘distributed ledger’ which permanently stores all transactions, best known for providing the foundation for cryptocurrencies such as Bitcoin. Ticketmaster’s Justin Burleigh said incorporating blockchain into Ticketmaster’s platform “will continue our progress to improve ticketing and create a safer and more seamless experience” for fans.

The Aventus Protocol Foundation – which raised more than US$18m in its initial coin offering (ICO) last September, and has since recruited high-profile names including ex-Eventim MD Rob Edwards and Waterson report author Prof. Michael Waterson to bang the drum for its open-source ticketing platform – says it is “thrilled to see the adoption of blockchain networks”, with the acquisition “validat[ing] our own vision for blockchain ticketing”.

“Along with Professor Waterson, we are excited to see ticketing organisations look toward blockchain as a potential technology answer to a plethora of ticketing challenges,” says the company in a blog post. “Ticketmaster acquiring Upgraded is welcome news as the ticketing industry moves towards a more secure, controlled and fairer ticketing experience.”

“Whether this move benefits the industry as a whole, or only Ticketmaster clients, remains an open question,” it adds.

Ticketfly co-founder Dan Teree – now COO of the recently launched Tari Labs, whose Tari blockchain will serve as a secure resale platform for ‘digital assets’, including tickets – says the acquisition is proof major music industry players are waking up to blockchain’s potential.

“TM’s acquisition is yet another sign that serious players are clearly interested in implementing blockchain technology as a means to turn tickets into digital assets,” he tells IQ, “and therefore gain more control over how tickets are transferred and monetised in the secondary market.”

Tari said in May blockchain can solve the problem of “economic leakage”, where middlemen reap the revenue from the resale of virtual goods, such as tickets. He said Tari will be designed to help compensate original “owners”, like artists, sports teams, event promoters and other parties.

“Firstly, our opinion is that this is a positive step,” adds Tom Roetgering of Netherlands-based GUTS Tickets. “Although you could raise questions about the way Upgraded tackles the dishonest reselling of tickets – and with that the ultimate motive behind the acquisition – the truth is, you never know what these kinds of moves will mean for the future. We are ultimately happy with this news, as it validates the application of blockchain ticketing on a larger scale.

“For us it has, obviously, been clear for quite some time that this is the way the ticketing industry is headed. Seeing the major players now dip their toes into blockchain is good PR, both for them and for us. As mentioned, it remains to be seen if and to what degree this acquisition will have any impact on the ticketing sphere. Meanwhile, we are building and gwe are building and growing.”

An exec from a fourth blockchain ticketing company, who asked not to be named, suggests Ticketmaster – which recently shut down its secondary ticketing platforms in Europe – will likely use Upgraded’s tech to control resale and, for the first time, be able to reimburse artists and promoters when their tickets are sold on.

“Now Ticketmaster’s involved, the rest [other ticket agencies] will have to follow suit,” they add. “This is as significant as when we first got digital, and later mobile, tickets. It’s time to evolve or be left behind.”

The co-founder of Ticketfly and a former NME exec are among the latest music biz figures to throw their hats into the ring of the increasingly congested blockchain ticketing sector.

Blockparty is led by Shiv Madan, formerly of NME.com, eBay, Lehman Brothers and wearable data start-up Ability, and launched at leading blockchain/cryptocurrency conference Consensus earlier this month. It aims to use the blockchain – a distributed ledger which permanently stores all transactions – to eliminate problems in ticketing, including fraud and bulk-buying by bots.

Madan comments: “Eventgoers are rightfully frustrated with the current landscape of the ticket purchasing experience. We’ve all been there: after spending months saving up for a ticket to a concert or sports match, you furiously type in a captcha on a ticketing site, desperate to get great seats – only to find out that all tickets are sold out and have magically re-appeared, within minutes, on a reseller site for five times the original price.

“With Blockparty, we’re reshaping the event ticketing industry to improve the purchasing experience, eliminate reseller exploitation and give power back to the people.”

The Blockparty mobile app will beta-launch at Elements Lakewood Music Festival in Pennsylvania this weekend (25–27 May).

According to Fortune, Tari-issued tickets will be “tracked and logged on a new, to-be-developed blockchain, also called Tari, complete with its own native, as-yet-unreleased cryptocurrency, dubbed ‘Tari tokens’. The team also aspires to create a marketplace beyond tickets to cover all sorts of digital goods, including loyalty points, virtual currencies and in-game items.

During Consensus COO Teree told the magazine that blockchain can solve the problem of “economic leakage”, where middlemen reap the revenue from the resale of virtual goods, such as tickets. He said Tari will be designed to help compensate original “owners”, like artists, sports teams, event promoters and other parties.

For a primer on blockchain and how it can be effectively utilised for ticket sales, see IQ’s recent primer, written by Lyubomyr Nykyforuk of Softjourn:

How the worlds of ticketing and blockchain intersect