Ireland to permit some shows, festivals in August

The Republic of Ireland has released its roadmap for reopening society and business following the Covid-19 shutdown, which sees shows and festivals return from 10 August, provided that capacity restrictions and social distancing measures are complied with.

Under the five-step plan presented by Irish prime minister (taoiseach) Leo Varadkar, “festivals, events and other social and cultural mass gatherings” will make a comeback in the final stage, under certain constrictions.

The reopening of events will be contingent on “both indoor and outdoor number restrictions”, according to the exit plan, although the specifics of such capacity restrictions are not communicated.

It was announced last month, however, that events over 5,000 people would not return until after the end of August, leading to the cancellation of MCD Productions’ Longitude and Sunstroke festivals, as well as Pod/Aiken Promotions All Together festival.

Under the five-step plan “festivals, events and other mass gatherings” will make a comeback in the final stage, under certain constrictions

The plan also mandates that “social distancing” must be adhered to during events. Once again, the details of such measures are not laid out. Currently, social distancing in Ireland implies maintaining a distance of two metres between individuals.

The fifth phase of Ireland’s recovery will also see pubs and nightclubs open their doors, “where social distancing and strict cleaning can be complied with”.

The capacity reductions and social distancing measures referenced in Ireland’s reopening roadmap are akin to those imposed on venues in Spain, which released its exit strategy last week. Spain’s plan indicated that concerts could return as early as May with certain capacity and distancing restrictions, but was criticised by members of the live industry for being “unclear” and unrealistic for many promoters.

The Republic of Ireland’s major summer festivals, including Longitude, All Together Now, Life Festival, Body & Soul and the new-for-2020 Sunstroke, have been called off after the Irish government confirmed there would there would be no licences issued for events over 5,000 people until the end of August.

A statement issued by the Irish prime minister (taoiseach), Leo Varadkar, says while licensing decisions in Ireland are usually reserved for local councils, local authorities “have been advised by government that event promoters should be informed that events requiring licences in excess of 5,000 will not be considered for the period up to the end of August”.

MCD Productions, which promotes Longitude (3–5 July) and Sunstroke (13–14 June), as well as Electric Picnic on 4–6 September, says while it is “obviously devastated” Longitude isn’t going ahead, “the health and safety of our fans and staff is paramount and we fully respect the government’s decision. We would like to take this opportunity to thank the frontline workers currently giving their all to keep us safe.”

As for Electric Picnic, MCD head Denis Desmond says: “It’s a long shot. The chances of it happening are not good.”

“The health and safety of our audience, team and performers takes total precedence at this time of global crisis”

Restrictions on major events are also in place in the Netherlands, where large events are banned until 1 September; Germany, Belgium and Denmark, where a ban is in place until 31 August; and Luxembourg and Finland, which have prohibited mass gatherings until 31 July. France, meanwhile, has given mid-July as the earliest date when events could go ahead, while Austria has identified the end of June.

The restrictions across Europe are in line with the latest European Union guidance.

“Like everyone across the world, we’ve been watching the ongoing effects that Covid-19 is having on our everyday lives,” say All Together Now (31 July–2 August) organisers Pod Concerts and Aiken Promotions, which had booked Iggy Pop, Lauryn Hill, Mura Masa, Goldfrapp and more for its third edition. “The health and safety of our audience, team and performers, plus the extended communities to which they belong, takes total precedence at this time of global crisis.

“Being ‘All Together’ has never been more poignant. While for now, we can’t be together physically, we must be together in spirit by following HSE [Health Service Executive] and government guidelines [and] supporting frontline staff, our local communities, independent businesses and artists who need our support more than ever.”

Avril Stanley, promoter and festival director of Body & Soul (19–21 June), says: “While we may not be able to gather in person this summer, we are with you in spirit. We’re not going anywhere.”

MCD brings back Sunstroke festival for 2020

Faith No More and Deftones will headline Sunstroke when the ’90s alternative-rock festival returns to Ireland next summer.

Sunstroke, promoted by Denis Desmond’s MCD Productions, debuted in 1993 in Dublin’s Dalymount Park, when it was also headlined by Faith No More, according to RTE. The final Sunstroke took place at the Royal Dublin Society’s RDS Simmonscourt venue in 1995.

For its return in 2020, it will take place at Punchestown Racecourse near Naas – formerly also home to MCD’s Oxegen festival – on Saturday 13 and Sunday 14 June.

Other performers over three stages include the Jesus and Mary Chain, Gojira, Black Veil Brides and Killing Joke, as well as Bowling for Soup, While She Sleeps, Frank Carter and the Rattlesnakes and Mongol-metal band the Hu. 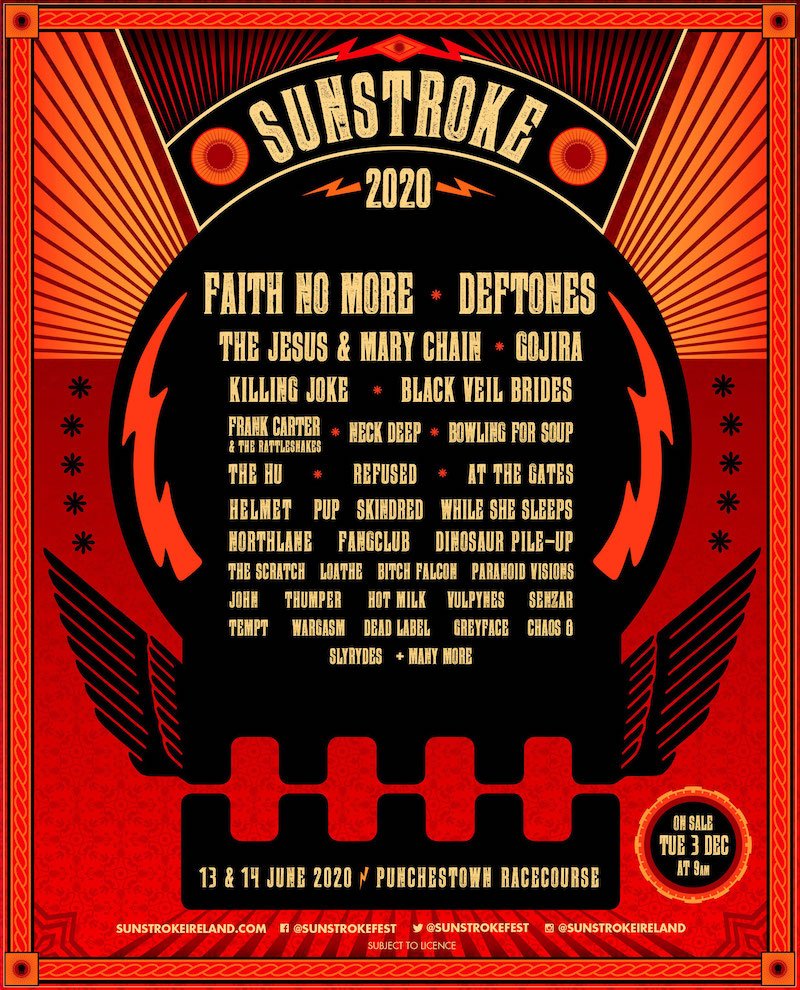 MCD’s other festivals include the annual Longitude event, also in Dublin, as well as Love Sensation, Summer in the City and the Irish leg of Country to Country (C2C).