‘It’s for the people who never stopped’: Shiiine On talks “music for music’s sake”

Since its launch in 2015, Shiiine On Weekender has carved out a niche in the competitive UK festival market, gaining a cult following with its joyous annual “celebration of indie and dance from the late 80s, 90s and beyond” in Minehead, on England’s south-west coast.

Ahead of Shiiine On 5, headlined by the Lightning Seeds, Embrace and the Wonder Stuff, IQ chats to festival founders Steve Aston and James O’Mullan about the festival’s history, its enduring appeal, ticket pricing, Butlin’s, and why 2019 is set to be Shiiine On’s best year yet.

Just don’t call it a nostalgia-fest…

IQ: Can you talk a bit about the history of the festival and your roles in it?
SA/JO: We first had the idea to do the festival around 2013. We were sick of music we liked not being catered for at festivals, and bands we loved seemingly getting forgotten about despite still putting out brilliant new records. Festivals seemed to turn to be more about people’s wellies costing more than the ticket itself and becoming something of a fashion parade. The idea of a festival being on a bucket list is offensive to real music fans, in my opinion.

The idea of a no-mud festival, with the ability to get a shower and have a proper bed, was also appealing with older age creeping in. We set about making it happen and went on sale with our first event in late 2014. That sold out almost a year in advance, and we haven’t looked back since. Ideas in a pub are usually always the best.

At what point did you realise there was demand for – for lack of a better word – a ’90s nostalgia festival of this scope?
We’ve never viewed the event as nostalgia and never will.

It is sometimes a battle to keep away from that stigma, and I suppose there will always be people who view us as such. We must admit that agents and bands are slowly moving away from viewing us as nostalgia and as an event that they want to play at. It’s a festival for music fans, and if you aren’t on your game on stage these people will know.

We have dedicated new band stages and have no problem promoting new bands we feel are good enough. Psyence and Deja Vega have both played the main stage in recent years and Ivory Wave will open up the main stage this year. By all accounts, people are starting to notice these bands, and about time too, we say. What people should be looking at is why aren’t the younger generation as passionate about their bands, and why don’t they follow them around the country?

We in no way encourage the fancy dress mob to attend. The music we cater for was from a scene that is still active and the bands are turning out great tunes. We saw people at a recent festival lamenting the fact that a band did not play the greatest hits during their headline set. That’s the opposite ethos of what Shiiine On is about. We would actively encourage the band to play what they want. Our first event was headlined by Inspiral Carpets and the Wonder Stuff, who were both touring their new albums and played exceptional sets, and Orbital headlined last year on the back of one of their best albums to date.

Bob Mould, Steve Mason and Idlewild are on the main stage this year, and hopefully all their sets will contain loads of new tunes. Our crowd expect it.

The vast majority of our crowd are music fans and there to enjoy just that: Music for music’s sake.

What’s the clientele like? Is it mostly people who were there the first time, or is there a younger contingent too?
It’s mostly 35-plus, with a 50/50 male/female spread. As mentioned, we have stages dedicated to new bands, so there are always a good few younger ones around, too. Then there are the hardcore who have attended every event and book year on year without knowing the line-up – respect to them for that!

The clientele are what make it, to be honest, and it’s always a pleasure to meet people who come to the event. It’s the people who never stopped. The gathering of the tribes for people whose own subculture or genre have stayed with them for most of their lives. The people to whom your band is your football team. The ones who kept the faith!

How does Butlin’s Minehead work as a venue? Are there any particular challenges involved in staging an event like Shiiine On at a holiday resort?
It’s perfect. The place [the 6,500-cap. Minehead Arena] is a purpose-built entertainment venue so there are very few challenges. The venue has undergone a multimillion-pound upgrade recently and it’s one of the safest places you can attend an event. We have multiple stages and venues, top-class production and loads of bars and restaurants catering for all tastes. Butlin’s staff run a steady ship and artists and customers always speak highly of their experiences on site.

Credit there must go to Mike [Godolphin, head of entertainment] and John [Whybrow, operations manager] and their resort teams, who make the event run so smoothly for us. Maybe it’s a long way to go but that’s half the fun, making it a road trip. [Read IQ’s 2016 interview with Goldolphin here.]

“The Stourbridge Sunday will go down in folklore”

How is 2019 looking? Are you where you want to be at this stage?
We are at around 90% sold out, which is great, particularly in what seems to be a tough year industry wide. We have a feeling this could be our best year yet.

The line-up this year we feel tops anything we have done previously. Particular highlights will be having Bob Mould [of Hüsker Dü and Sugar] Swervedriver and Steve Mason performing for the first time. The Stourbridge Sunday [with Ned’s Atomic Dustbin, Pop Will Eat Itself and headliners the Wonder Stuff, all of whom are from Stourbridge, in the West Midlands] will go down in folklore. Having Inner City back playing live will be special for the dance heads, especially as we have managed to convince Streetrave to come south of the border as part of their 30th-anniversary celebrations.

You keep ticket prices relatively low. How much of a challenge is that, and do you think festivals are becoming too expensive?
Not everyone thinks that, if you were to look at some of the online comments! But we do feel it is superb value for money, when you take into account all the talent that play and you get a weekend on an amazing resort. [At press time, festival tickets and accommodation for three nights for four people can be had for £514.11, or £128.50 each.] There is so much more to do than just watch bands, with the resort holding a cinema, numerous bars and restaurants, swimming pools, pool halls and arcades, and of course you are minutes away from the town and beach if you wanted to wander off site.

Festivals in general being too expensive? It’s all down to economics and what the talent costs, ultimately. The demise of recorded music and streaming means that artists are relying more than ever on performing. It’s the risk game still, after all. We do feel we are competitively priced compared to other events, though.

What are some of your highlights over the years?
There are so many. Walking into the Skyline Arena on the first year to see it packed to rafters was a sight to behold. The [Happy] Mondays, one of the greatest bands of all time, headlining our festival was special. Other notable highlights include Hooky [Peter Hook] blowing the roof off the place with ‘Love Will Tear Us Apart’ and Embrace doing ‘All You Good Good People’, and getting praise from people we hold up as pioneers in this game is always humbling. To be honest, there have been so many that it feels amiss to list certain highlights, and we know there will be many more to come this year.

The overriding highlight is probably just seeing it all coming to fruition and the ‘Shiiine family’ come together from all across the globe.

Anything else we should know?
We would like to remember and express our appreciation to the sadly deceased Steve Forster for all his help over the years. [Forster passed away in April.] He is sorely missed by both of us and many more people.

We would also like to thank all the people who have attended and helped us over the years. You know who you are. 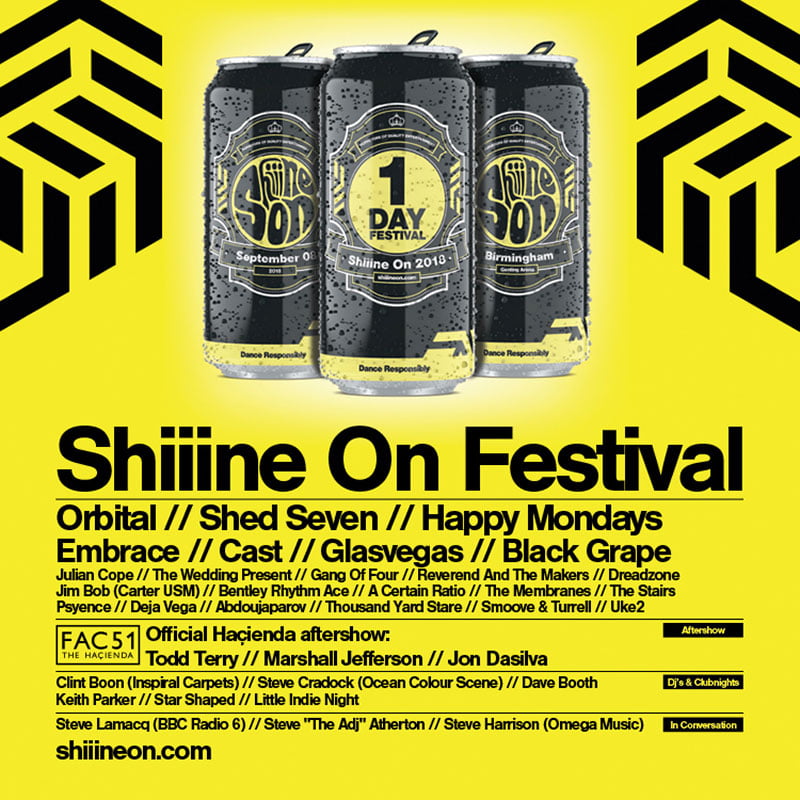