A successful outcome from yesterday’s 5,000-person Sefton Park Pilot in Liverpool will provide a lifeline to the entire UK live music business by proving that festivals can go ahead safely with no social distancing this summer, organiser Melvin Benn has said.

Featuring music from Zuzu, the Lathums and Blossoms, the one-day music festival took place on 2 May as part of the British government’s Events Research Programme (ERP), following two 3,000-person club nights, dubbed The First Dance, held at Liverpool’s Bramley-Moore Dock on 30 April and 1 May. Like all ERP events, there was no requirement to socially distance or wear a face covering at the three pilots, though all ticketholders required a negative Covid-19 test to gain entry.

Festival Republic MD Benn described the model as a “prototype” to reopen the industry after more than a year without any significant live music events. “Will we always need it? I hope not,” he told IQ, “but we’ve learnt a lot and we’re ready to pass it onto the industry.”

For the Sefton Park event, attendees and guests underwent a supervised lateral-flow test (LFT) at a local tennis centre up to 32 hours before the event. Each test was registered directly with the National Health Service (NHS), and results communicated via text and email within 30 minutes, with a negative test result activating each ticket. An additional testing site was positioned directly outside Sefton Park.

Alongside the lateral flow test, attendees were also encouraged to carry out a government PCR test, mailed by post, with a second test completed up to five days after the show. To motivate fans to complete the post-show test, Festival Republic offered a range of festival ticket prizes as an incentive.

Testing for staff, guests and press was overseen by Caroline Giddings and Solo Agency, one of a number of live music businesses to offer its support to the event, which was pulled together in the space of three weeks. (That’s not quite a record, said Benn – the One Love Manchester show with Ariana Grande was organised in even less time – but it was “pretty quick!”.)

“It’s important for the industry … that events like this happen”

In addition to Festival Republic, “there are people working on it from SJM, from DF, from Cream, from Isle of Wight Festival – it’s a bit of an industry effort,” explained DF Concerts’ Geoff Ellis. “It’s important for the industry and for fans that events like this happen to help us get there.”

For Ellis, who described Sefton Park Pilot as a “monumental occasion”, it was “really surreal being here because it feels dreamlike,” he said. “You’re seeing people from the industry and you bump into them and you’re wondering, ‘Wow, is this really happening?’”

Speaking to IQ, Benn related the event in similar terms, saying organisers, fans and artists alike were conscious of participating in a “historic moment” paving the way towards an overdue return to something approaching normality.

Benn is as confident as he was in summer 2020 that rapid testing (now coupled with vaccinations) is the key to unlocking the return of live events. “It’s something I’ve been saying since June last year, and it’s taken a long time for government to listen, but I think they do believe in it now,” he explained. “They did have faith in this [Sefton Park Pilot], and certainly [from conversations with] the scientific teams from government and outside of government that I’ve been working with, the modelling of this seems to suggest to me that it can work.”

“What we are learning is that a festival isn’t going to need to look different to how it did look, or behave different to how it behaved,” pre-coronavirus, he continued. “Putting on a festival, as any festival promoter will tell you, is a series of hurdles, and we’ve all learnt how to jump every single hurdle that’s ever put in front of us. Covid one is another one. We’ll find ways of overcoming.”

The other hurdle at present, of course, is the non-availability of event cancellation insurance, though Benn expects more news on that front in the coming weeks.

“The government provided insurance for this event, to give us the backing we needed, and in doing so they demonstrated there’s a need for insurance,” he explained. “There’s a team working very hard to find a way […] out of this, and hopefully by the beginning of June there’ll be something in place.”

As in Barcelona, where a recent pilot arena show demonstrated a lower incidence of Covid-19 than in the city as a whole, Sefton Park Pilot needn’t record zero cases to be considered a success, Benn continued. “It’s not necessarily about no infections,” he said. “The ideal outcome is that there is no greater spread of the virus in Liverpool than there already was. We want to prove you can have these events and it doesn’t present a greater risk to the area than already exists.”

While interim findings from the ERP events will be reported to the prime minister in a matter of weeks, Benn revealed that a second FR-organised outdoor pilot show is in the pipeline. While details are yet to be announced, it will likely be similar in format to Sefton Park Pilot, and “greenfield, for certain”, according to Benn.

Like Sefton Park Pilot, that second pilot event will again mobilise an army of festival staff and music fans in numbers not seen since the summer of 2019. But Benn, like everyone involved with the pilots, is hopeful those events won’t be a one-off.

“There have been a huge amount of people who made the effort to give up their time for this, and they all put an enormous amount of work into it,” he said. “So what we’re learning, we want to tell everybody – because this is for the whole industry.”

The ERP, details of which were announced earlier this month, will also include several sporting fixtures, a business conference and a club night, also in Liverpool, among other events. IQ reported at the time that a live music pilot event was still to be announced.

Sefton Park Pilot will take over a small area of the 235-acre park on Sunday 2 May, with performers including Blossoms and the Lathums, as well as Liverpool singer-songwriter Zuzu. After doors open at 4.30pm, concertgoers will not have to socially distance or wear face coverings, given the show’s status as a research study on the transmission of Covid-19 in an outdoor festival setting.

Scientists monitoring the festival, which is being produced by Festival Republic (Reading and Leeds Festivals, Download, Wireless), will observe how crowds mixing outdoors increases the risk of transmission of the coronavirus.

Ticketholders will take a lateral-flow test at a community testing site 24 hours before the event, and will have to produce a negative test result to gain entry. Those attending will also be urged to take an at-home PCR test on the day of the event, as well as five days afterwards, to ensure any transmission of the virus is properly monitored.

So-called vaccine or health ‘passports’, of the kind being used in Israel, New York and elsewhere, and considered by the EU, are not part of the ERP in Liverpool, though they are being trialled at other ERP events.

“This event is not about pushing vaccines or passports – we do not want to limit attendance to our events in any way. Working with the government we want to create a universal blueprint for reopening and demonstrate we can do it safely.

“Secretary of state Oliver Dowden and his team at DCMS are showing real commitment to making this a reality by launching the Event Research Programme and the Sefton Park pilot.”

Dowden, who leads the Department for Digital, Culture, Media and Sport (DCMS), says: “We’re one step closer to a summer of live events now our science-led programme is underway. Testing different settings and looking at different mitigations is key to getting crowds back safely and the Sefton Park Pilot is an important addition to the programme.

“After many months without live audiences, Festival Republic are bringing live music back to fans with this very special event and I hope it won’t be too much longer until gigs are back for good.”

Under the current ‘roadmap’ out of lockdown, the British government hopes to lift all restrictions on gatherings and events after 21 June.

“It is good to see Liverpool bringing a live, outdoor music festival to the Events Research Programme. The festival in Sefton Park will make the most of an iconic, accessible fresh-air venue,” comments Prof. Iain Buchan, dean of the Institute of Population Health at the University of Liverpool. “Restarting this part of community life is important to society’s wellbeing and therefore is of public health importance, as well as minimising Covid-19 risks.”

“Live music is a vital part of so many people’s lives,” Benn continues. “This event is the first step in getting festivals back on track this year. It’s about demonstrating our absolute commitment that we can and will open on 21 June.

“We want to get festival fans back at events safely this year. We all need a summer of live music.”

Tickets for Sefton Park Pilot, which may only be purchased by residents of Liverpool, are on sale now, priced at £29.50.

The poster for the event, which shows the festival-style ‘big top’ venue in which the concerts will be held, is pictured below: 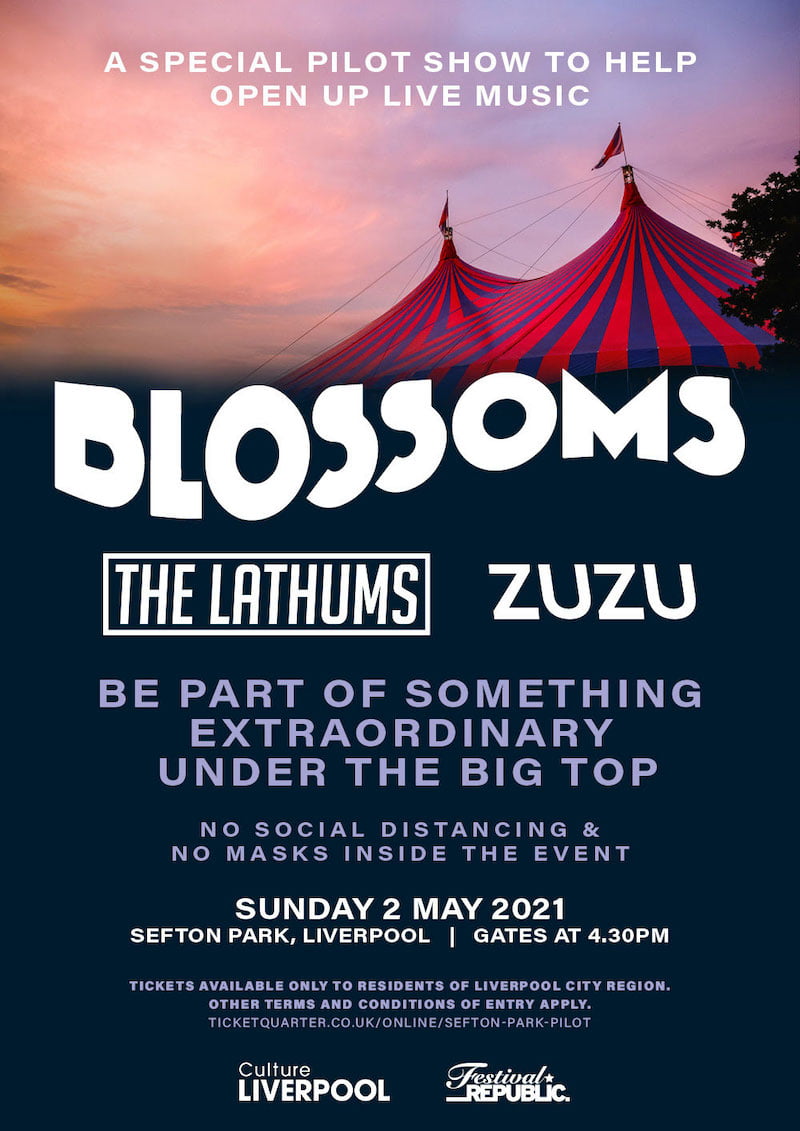