US hip-hop festival Rolling Loud will finally make its European debut when it lands in Portugal this summer.

Headlined by J. Cole, A$AP Rocky and Future, the Live Nation-backed event will take place from 6-8 July on Praia Da Rocha Beach, Portimão, in the Algarve.

Rolling Loud has previously expanded from its flagship Miami festival to launch in the Bay Area, Los Angeles and New York, as well as Sydney, Australia

Rolling Loud Portugal was originally set for the summer of 2020, before being called off due to the pandemic. Founded in 2015 by Tariq Cherif and Matt Zingler, the brand has previously expanded from its flagship Miami festival to launch in the Bay Area, Los Angeles and New York, as well as Sydney, Australia. A proposed Hong Kong spin-off was cancelled in 2019. 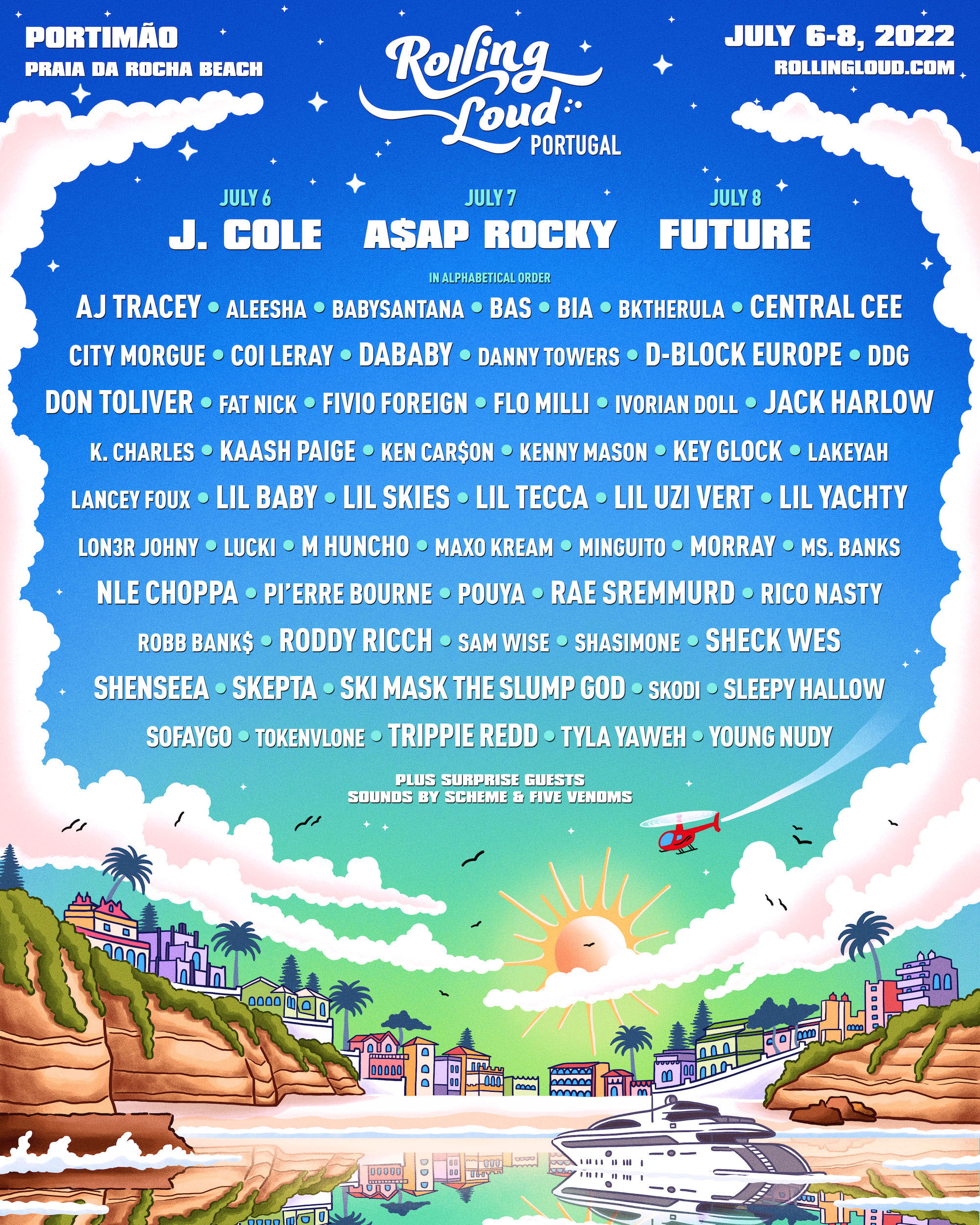 The UK’s Download Festival, Serbia’s Exit Festival and Rolling Loud Portugal are among the first major European festivals to unveil line-ups for next year, after cancelling their 2020 editions due to the coronavirus outbreak.

Kiss, Biffy Clyro and System of a Down have been announced to headline the UK’s heavy metal festival, which will take place between 4 and 6 June in Donnington Park next year.

In place of Download Festival 2020, promoter Festival Republic created a virtual version of the festival, airing footage of previous live performances from the acts billed to play including Kiss, Iron Maiden and System of a Down.

Exit Festival has also revealed the first wave of headliners including David Guetta, Tyga and DJ Snake for its 2021 edition, which will take place from 8 to 11 July in Novi Sad.

The Serbian mega festival was one of the last major European events to cancel this year’s edition after hopes of postponing from July to the end of August were dashed due to new outbreaks of the virus in the country.

Elsewhere, Rolling Loud will make its European debut next summer with performances from A$AP Rocky, Future, Wiz Khalifa. The hip-hop festival will take place between 6 and 8 July next year at Praia da Rocha beach in Portimao, Portugal.

Among the festivals that have already announced line-ups for 2021 are Primavera Sound Barcelona, which reported a record sell-out for next year’s edition, and Mad Cool in Madrid, which will welcome performances from Twenty One Pilots, Placebo and the Killers.

The UK’s Isle of Wight Festival has also announced the first wave of artists for next year’s edition, taking place from 17 to 20 June including Lionel Richie, Snow Patrol and Duran Duran.

When: 8 to 10 July
Where: Praia da Rocha, Portimão, Portugal

The Rolling Loud festival brand is making its European debut this summer in the Algarve region of Portugal.

In an Instagram post, Rolling Loud co-founder Tariq Cherif warned that capacity is “limited” for the festival due to the beach setting, and advised fans to act quickly to purchase tickets.

Founded in 2015 by Cherif and Matt Zingler, Rolling Loud has expanded from its flagship Miami festival to take place in the Bay Area, Los Angeles, New York and Sydney, Australia. An inaugural Rolling Loud Hong Kong was called off earlier this year.

The pre-sale for Rolling Loud Portugal starts on Thursday 6 February at 8 a.m. Remaining tickets go on sale at 8 a.m. the following day here.

Staged in multiple venues ranging from 250- to 7,000-capacity, fans will be able to see acts such as Nils Frahm, Herbie Hancock, Arturo Sandoval, James Carter Organ Trio, Emmet Cohen and Rymden over the course of ten days.

“In the last 10 years we expanded the jazzopen from a regional event to one of the leading international jazz festivals with 50.000 ticket sales annually,” comments festival director Juergen Schlensog.

“This was only possible by means of a strong sponsoring. Daimler, Mastercard and Allianz accompany the festival alongside other valuable partners and brands. The UK market is of vital importance for us, as we book all major acts in direct exchange with local agents in the UK and USA.”

Tickets for Jazzopen Stuttgart 2020 are available here, with full festival passes priced from €700. Tickets for individual shows are also available for a range of prices, with some free-to-access concerts.

The 2020 edition will see artists including Sting, Lenny Kravitz and Van Morrison

The Portuguese sister event of Barcelona festival Primavera Sound has released the line-up for its ninth edition.

Balaton Sound, one of Europe’s largest open-air electronic music festivals, is back in 2020 following a record-breaking outing last year.

Over 170,000 fans attended the five-day event in 2019 to see artists including Tiesto, Marshmello, the Chainsmokers and Armin van Buuren.

Tickets for Balaton Sound 2020 are on sale now, with multi-day passes starting from €169 and going up to €325 for a five-day VIP ticket. Prices will increase on 14 February.

Mallorca Live festival is back in 2020 for its fifth year, with a headline performance from British electronic pop band Pet Shop Boys.

Crystal Fighters, Michael Kiwanuka, Miles Kane, Kate Tempest and Temples are among other acts performing at the festival.

Last year’s festival saw a record attendance of 33,500 people over three days, thanks to a festival site extension. A new fourth stage – Tròpic Stage – has been added for 2020, dedicated to electronic acts, featuring DJs including Marcel Dettman, dOP, Or:La and Red Axes.

Crystal Fighters, Michael Kiwanuka and Kate Tempest are among other acts performing at the festival

When: 13 to 15 August
Where: Silesia Park, Chorzów, Poland

Poland’s Fest Festival, one of the fastest-growing music festivals in eastern Europe, has announced the second wave of acts for its 2020 edition.

The festival’s second outing will be headlined by Mark Ronson, with performances from James Bay, Nothing But Thieves, Denzel Curry, Sigrid, Alice Glass, Sohn and Daughter.

Polish rappers Taco Hemingway and Mata have also been added to the line-up, along with local indie-rock band Sonbird.

Fest Festival was nominated for best new festival at the European Festival Awards 2019 and is up for the New Gig on the Block prize at the 2020 Arthur Awards, taking place at the International Live Music Conference in March.

Tickets for Fest Festival are available here for PLN 349 (£70), with prices set to increase on 14 February.

The festival’s second outing will be headlined by Mark Ronson

Pod’s Forbidden Fruit Festival is celebrating its tenth anniversary edition in 2020 at its home in the grounds of the Irish Museum of Modern Art in the Royal Hospital Kilmainham, Dublin.

The line-up for this year’s festival includes headliners Jorja Smith and Underworld, along with Peggy Gou, Loyle Carner, Hot Chip and the Avalanches.
The festival is returning to its roots this year, taking place over two days, rather than the three-day format preferred in previous editions. Organisers promise plenty of “birthday surprises” for their tenth year.