With just over a month to go, Reading Festival promoter Festival Republic has revealed that all tickets for the 105,000-capacity UK festival have sold out.

A limited number of day and weekend tickets remain for Leeds Festival.

All tickets for 105,000-capacity Reading have sold out

Tickets for both events were priced at £205 + booking fee for a full weekend pass, with day tickets starting at £69.50.

Reading’s capacity was increased by an additional 5,000 for 2019, reflecting Festival Republic’s positive relationship with local authorities. Councillor Sarah Hacker, Reading council’s lead member for culture, heritage and recreation, said: “Thank you for the sheer amount of hard work that is put into these festivals, both by Reading Borough Council and Festival Republic.”

Reading Festival has been awarded gold status by Attitude is Everything, reflecting the UK event’s 12-year commitment to increasing accessibility for deaf and disabled people.

The Festival Republic-run event has worked with Attitude is Everything, which works to improve deaf/disabled people’s access to live music, since 2005, and has since then delivered a huge increase in deaf and disabled festivalgoers: +91% between 2014 and 2017 alone.

Reading reached silver status on the charity’s Charter of Best Practice in 2014, and in 2016 won an Outstanding Attitude Award for its sign-language interpretation service for deaf customers.

“I attended my first Reading Festival in 1987 for a day, when the headliners were the Mission, Status Quo and Alice Cooper,” says Attitude CEO Suzanne Bull MBE. |The highlight of my day was seeing John Peel’s delight at tucking in to a very lush jacket potato and baked beans – as well as seeing all the bands, of course. Back then, hardly any disabled fans attended music festivals and facilities were practically non-existent, which makes today’s award of great personal satisfaction.

“In an industry as diverse as music and festivals, we should be doing everything in our power to make our events as accessible as possible”

“The festival today could not be more welcoming or inclusive. Working in partnership with Attitude is Everything, Melvin Benn and the Festival Republic team have consistently developed the festival to become more accessible and inclusive as the years have gone by. As a result, attendances from deaf and disabled customers, along with their friends and families, have never been higher. The impact is far-reaching, and a perfect embodiment of how live music can change lives when barriers to access are removed.”

Festival Republic MD Melvin Benn adds: “In an industry as diverse as music and festivals, we should be doing everything in our power to make our events as accessible as possible for everyone. As we continue to develop our BSL [British sign language] interpretation service and progress all disabled access avenues across our events, it’s rewarding to see our disabled customer numbers continuing to grow.

“Having worked with Attitude is Everything since 2005, we look forward to continuing this relationship, and are delighted that Reading Festival has been awarded gold status on their Charter of Best Practice.”

In addition to accessibility, Reading/Festival Republic is spearheading a push for greater gender diversity in the live music industry with its new ReBalance initiative.

Respected UK charity the Royal Society for Public Health (RSPH) has called for drug-testing facilities, such as those trialled at Kendal Calling and Secret Garden Party last summer, to be made standard at all music festivals “where drug use is common”.

In a new report, Drug safety testing at festivals and night clubs, released this morning, RSPH says the move, “which is backed by 95% of festival-goers, [would] help minimise the risk of serious health harm as a result of recreational drug use”.

Secret Garden Party became last July became the first British festival to give attendees the chance to test the content of their drugs without fear of recrimination, with Kendal Calling following a week later. Jon Drape, whose Ground Control Productions company works with Kendal Calling, told IQ at the time drug testing is a “no-brainer”, adding around a quarter of those who tested their drugs opted to bin them after discovering their content.

RSPH’s own data suggests a similar figure of almost one in five (18%).

Drug testing at both festivals was undertaken in partnership with nonprofit The Loop, which will also introduce the testing – officially ‘multi-agency safety testing’ (MAST) – at several Festival Republic events this summer, including Reading and Leeds.

“If drug users can be reasonably sure of what they are actually taking, they will be better placed to make informed decisions about if and how to take these substances”

MAST, or a local variant thereof, is already commonplace in continental Europe, including the Netherlands, Austria and Spain. Efforts to introduce drug testing in Australia have been frustrated by local government and police, with festival promoters in New South Wales told they could face prosecution for drug supply.

According to RSPH, the need for pill testing at festivals has become more acute with the rise in strength of the average ecstasy pill. As reported by IQ last May, MDMA use is on the rise across Europe, with a simultaneous increase in the availability of high-MDMA pills and powdered and crystal forms of the drug.

“Given that a large degree of health harm associated with ‘club drugs’ stems from user ignorance of the exact strength and content of pills and powders of uncertain provenance, any measures that increase our knowledge base can be expected to have a positive effect on reducing harm – especially if the provision of such information creates an opportunity to impart information on safer behaviours and risk reduction to the key target population,” reads the RSPH report.

“If drug users can be reasonably sure of what they are actually taking, then they will be better placed to make informed decisions about if and how to take these substances, and so are less likely to have an adverse reaction or overdose as a result.”

MAST, therefore, says RSPH, is a “pragmatic harm reduction measure” which should “become a standard feature of places where drug use is prevalent, such as city-centre nightlife areas and festivals.”

With the 2017 festival season fast approaching and many events close to finalising this year’s line-ups, there’s a lot to fit in the first festival round-up of the year.

With that in mind, we’ve introduced a new, slimmed-down Festival Focus for the new year to ensure we cover as much news as possible, keeping you abreast of all the latest developments in the festival world with the minimum of waffle.

So, without further ado, read on for all the latest festival announcements (headliners are in bold) – and if we’ve missed something, or you’d like to see your event featured in a future Festival Focus, drop news editor Jon Chapple a line at [email protected].

Ten of Reading and Leeds Festivals’ 18 headliners, and 149 of their 186 total acts, are in the wrong position on the bill when taking into account online popularity, new research suggests.

Secondary ticketing outlet Ticketbis, recently acquired by StubHub, has taken it upon itself to help “beleaguered” festival bookers in an age when “looking at chart positions or record sales […] are totally worthless”, by devising a metric for judging the popularity using Facebook fans, Instagram followers, Twitter followers, Last.fm scrobbles, Spotify followers and volume of online searches to give a picture of the internet buzz around an artist.

It has applied this formula to the line-up for this weekend’s festivals, finding that 18 acts should be at least four places higher up the bill, 11 at least four places lower and 10 stage headliners in the wrong spot. Dethroned headliners include Red Hot Chili Peppers, who lose out to Imagine Dragons; Foals, who are replaced by Disclosure; and Biffy Clyro, who fall prey to Fall Out Boy.

“The internet has definitely made it really difficult to get a grasp on just who anyone is and what they’re worth anymore, which makes festival bookers’ jobs all the more difficult”

Explaining Ticketbis’s logic for the exercise, Lesanti says: “Booking a festival isn’t an easy job: Coordinating the schedules of hundreds of bands over loads of different stages, working around egos, flights and tour stops and, of course, making sure the biggest bands play at the top of the bill, to the biggest crowds.

“The internet has definitely made it really difficult to get a grasp on just who anyone is and what they’re worth anymore, which must make the festival booker’s job all the more difficult. We decided to help beleaguered bookers by figuring out a metric of our own for judging popularity in the internet age.”

See Ticketbis’s revamped Reading/Leeds line-up (the real one can be viewed here) below: 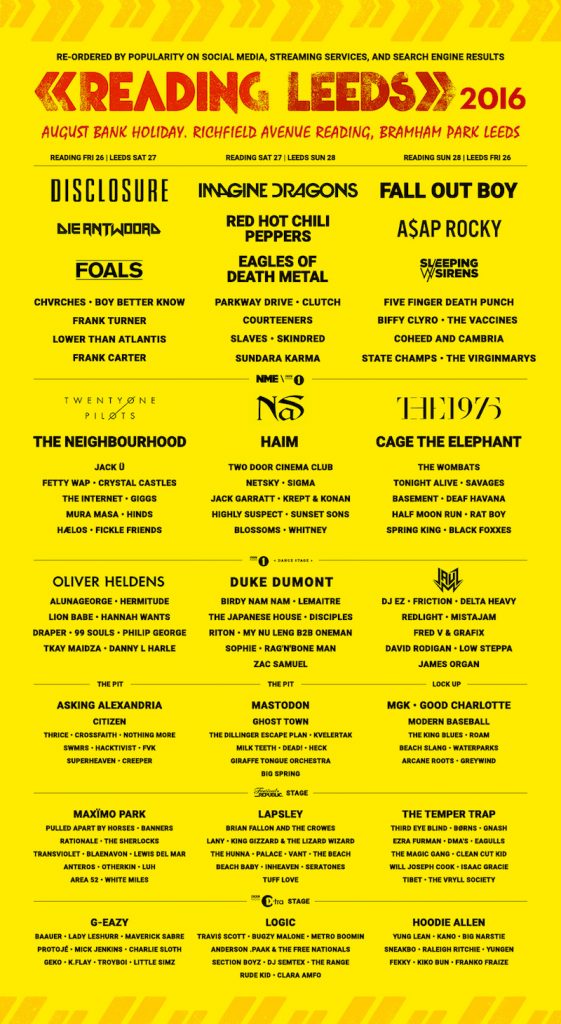