Liam Gallagher’s 29 June 2018 headline show in Finsbury Park, London, will be followed on the 30th by a similar mini-festival headlined by Queens of the Stone Age, promoter Festival Republic announced today.

The show, billed as ‘Queens of the Stone Age and Friends’, will also include performances by Iggy Pop (a UK exclusive), Run the Jewels and the Hives, with more acts still to be announced.

The announcement of the QOTSA (pictured) show follows the rejection of another bid by residents’ group Friends of Finsbury Park to prevent Wireless being allowed to take place in the 110-acre park. The association appealed following the failure of a previous legal challenge against Wireless 2016, but its claims were last week dismissed by court of appeal judge Gary Hickinbottom. Friends of Finsbury Park chair Simon Hunt says the group has now applied for permission to appeal to the Supreme Court.

The show will also include performances by Iggy Pop, Run the Jewels and the Hives

Like the Liam Gallagher concert, Festival Republic says the new event is “guaranteed to be [a] stand-out show of the summer”.

In addition to Wireless, Community and the two new shows, Festival Republic has applied to Haringey Council for permission to stage an additional, yet-to-be-announced “music event” with a daily capacity of 20,000 from Friday 4 to Sunday 6 May.

Tickets for the QOTSA-headlined event will go on sale on 9am on Friday 1 December, priced at £52.50 plus booking fee for GA, with VIP tickets are available.

Queens of the Stone Age, country singer Chris Stapleton and folk-rock four-piece the Avett Brothers have been announced as headliners for the inaugural Innings Festival, a new music’n’baseball event planned for next March by Live Nation’s C3 Presents.

“We are excited to welcome performers of this calibre and their fans to celebrate this first ever Innings Fest and we look forward to making this an annual event.”

The full Innings line-up is pictured below: 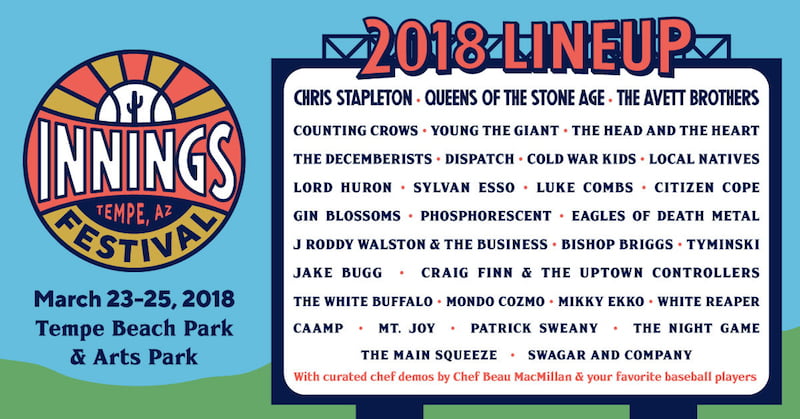