The first-ever US edition of Primavera Sound will take place next year in Los Angeles, California, with headliners Arctic Monkeys, Nine Inch Nails and Lorde.

The California debut, co-produced with Live Nation, is scheduled from 16 to 18 September 2022 at the Los Angeles Historic Park.

The long-awaited event was first announced in 2019, pre-pandemic, shortly after a minority investment in Primavera Sound by American private equity firm, the Yucaipa Companies, in June 2018.

The Los Angeles event coincides with the 20th-anniversary edition of Primavera Sound’s flagship event in Barcelona.

“Today, at last, we finally begin to cross the bridge that will take us to a new destination Primavera”

“Today, at last, we finally begin to cross the bridge that will take us to a new destination Primavera without renouncing to all those values that, after 19 editions, the Barcelona festival champions,” reads a statement from Primavera, regarding the LA edition.

“Sustainability, gender equality, social commitment and urban integration will guarantee an impact that goes beyond the strictly musical one.”

All previously purchased tickets will be valid for Primavera Sound Los Angeles 2022. Pre-sale for remaining tickets begins on Friday 10 December at 10:00 PT. More information can be found on the Primavera website.

See the first batch of confirmed artists for Primavera LA below. 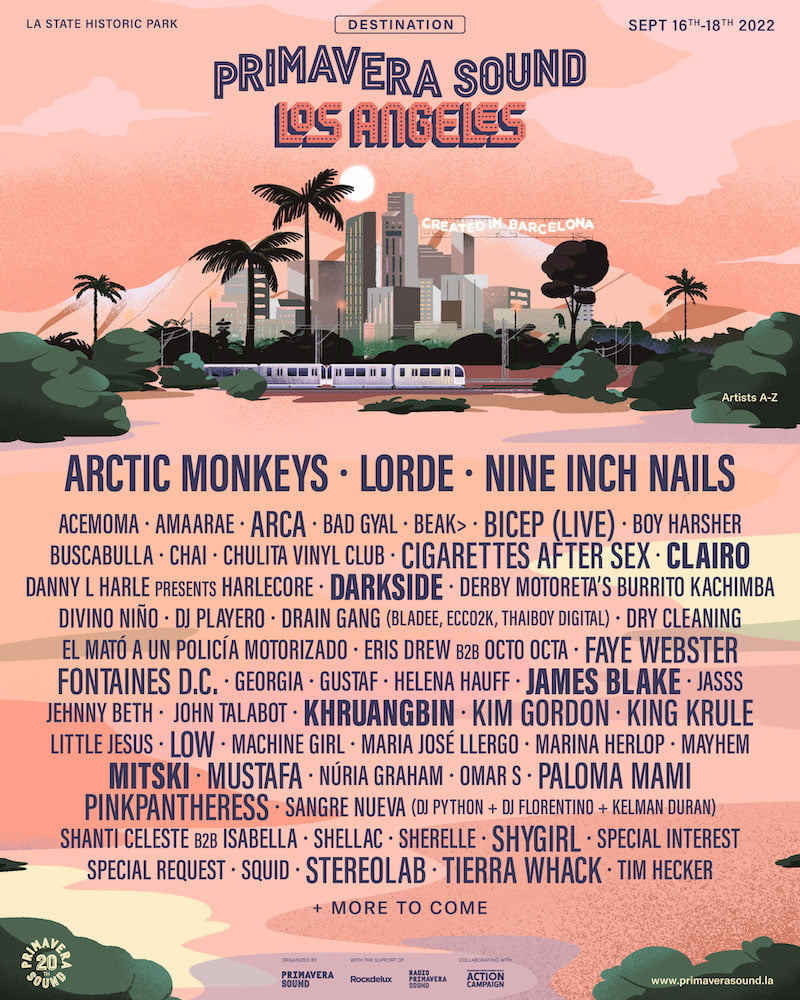 The New Bosses 2019 – the biggest-ever edition of IQ‘s yearly roundup of future live industry leaders, as voted for by their peers – was published in IQ 85 last month revealing the twelve promising agents, promoters, bookers and execs that make up this year’s list.

To get to know this year’s cream of the crop a little better, IQ conducted interviews with each one of 2019’s New Bosses, to discover their greatest inspirations and proudest achievements, pinpoint the reasons for their success and obtain advice for those hoping to be a future New Boss. Snippets of the interviews can be found in the latest IQ Magazine, with all interviews being reproduced in full online and on IQ Index over the coming weeks.

New Boss number ten is Pau Cristòful, a booking agent for Primavera Sound and Barcelona nightclub Nitsa. Cristòful is also head of booking for the Barcelona edition of MUTEK, a festival of electronic music and digital culture.

Born in Vic, some 60 kilometres from Barcelona, Cristòful has been attending Primavera Sound since he was 14. This year, for the event’s 2020 anniversary year, he will book all three editions of Primavera Sound: Barcelona, Oporto and Los Angeles. (Read the previous interview with Live Nation’s Natalia Zabkar here.)

What are you busy with right now?
I’m doing a bit of everything. Aside from discussing some early ideas for our 2020 festivals, we are now also in the middle of a renewal process for our dance club Nitsa, which takes place every weekend in the iconic Sala Apolo (1,600-cap.). Besides booking the artists that will play its two floors every Friday and Saturday, we are continuing to work on a new graphic design, as well as discussing ideas for optimising the experience.

We are also working on integrating the club into the city’s underground scene and representing different genres and realities in the club context, making it much more exciting than a regular, straight-forward house/techno night.

Did you always want to work in the music business?
I feel as though I had no choice: my passion for music resulted in me getting my first job as a music journalist when I was 14. I was around the same age when I started organising shows in my hometown of Vic, booking artists like 65daysofstatic, The Waves Pictures, Matt Elliott, James Blackshaw or Peter Broderick and putting them up in my parents’ place. For ten years, I mixed making money through journalism with spending my free time organising shows, first in Vic and then in Barcelona as well.

I have never worked on something that was not music-related and I can’t imagine myself doing anything else.

What are some of the highlights of your career so far?
This year’s Primavera Sound Festival was a clear highlight. I have always been interested in pushing boundaries and in trying to showcase different realities onstage and I think that, in 2019, Primavera Sound presented its most adventurous line-up in this sense. Not only by having a major non-male representation, but also by including J Balvin among our headliners and showcasing Asian artists, among many other examples.

Despite some initial criticism due to the stigma of reggaeton in Spain, I would say this edition ended up being the most special one in Primavera’s history. The whole audience seemed extremely grateful and respectful.

How has your role changed since you started out?
Not much – I started by suggesting artists of any kind and size and I am still working with a huge spectrum of bookings. It’s not that each booker organises a specific kind of artist, we all suggest what we like and what we find interesting and then we discuss it with our team.

What’s the biggest lesson you’ve learnt while at Primavera Sound?
Bearing in mind that we are such a big team, I felt that I needed to learn how the company worked and how I would work in that assembly line.

Primavera Sound’s reputation doesn’t just come from its line-ups, but mainly from the fact that we have an amazing, passionate team. I think it’s important that we learn how to relate to the other departments in order to exploit our full potential.

What, if anything, would you change about how the live industry is run today?
Our industry is extremely intense and stressful. I think we should look into increasing and facilitating our comfort and mental health: from early morning yoga lessons to being more adaptable with working from home every now and then.

Also, considering we work in front of a screen for most of the day, it’s also important to bring colleagues together through leisure activities, talks and informal discussions.

What do you do for fun?
Turning your passion into your job is amazing but it’s also dangerous if you don’t know how to disconnect. I am working on this at the moment, trying to combine partying with friends with doing sport and finding time to read and go to the movies, like I used to do back in the day. I also try to spend a few weekends as far away from music festivals as possible.

Spending time with your friends and not talking about your exciting discoveries in music but about how you feel instead is another important thing for me. It’s essential to keep some time to slow down and analyse yourself. If not, the fast rhythm of this industry won’t allow you to recognise the aspects of your life you might need to work on.

Do you have an industry mentor?
[Primavera Sound promoter] Fra Soler was already a kind of idol to me when I first met him six years ago. I think he is a perfect example of how you can combine business vision with a really high level of passion, which he maintains after so many years in the industry.

Even more importantly, I think Fra is a great example of how you can reach an amazing level in any industry while still remaining comprehensive and empathic – something I really appreciate.

What advice would you give to anyone who wants to get into, or is new to, the business?
Follow your passion – even if at some point you need to work on something that is not that exciting for you, keep developing and working on what you love. This way, hopefully, you will end up working in your desired position. Also, learn to keep time for yourself and to take care of your health so you don’t end up getting taken over by the industry stress.

Where do you see yourself in ten years’ time?
Since I first attended Primavera Sound – in 2007, aged 14, in order to see Sonic Youth – my dream job has been doing what I do now. So, in ten years’ time, I see myself doing what I do now: working with some of the industry’s biggest professionals, and at the same time still digging into underground scenes and figuring out a way to showcase them.

In the meantime, I hope to keep on learning how to optimise my work and how to adapt and react to industry changes and trends, in order to keep on presenting line-ups that are both exciting and challenging.

The first-ever US edition of Primavera Sound will take place next year in Los Angeles, California, festival co-producer Live Nation has announced.

The new event, which accompanies Primavera’s flagship festival in Barcelona and Portuguese sister event Oporto, is scheduled from 19 to 20 September 2020 at the Los Angeles Historic Park. The move stateside follows a minority investment in Primavera Sound by American private equity firm, the Yucaipa Companies, in June 2018.

The Los Angeles edition coincides with the 20th anniversary of Primavera Sound’s inauguration in 2001. Initially taking place in open-air museum Poble Espanyol, the festival moved to its current site at the Parc del Fórum complex in 2005.

The LA event is the latest addition to the Primavera Sound family, following the creation of sister conference Primavera Pro in 2010 and the Portuguese outing of the festival, Primavera Sound Porto, in 2012. “We have been thinking about Los Angeles for many years now, and the celebration of our 20th anniversary felt like the perfect timing for the decision of crossing overseas,” says Gabi Ruiz, a Primavera Sound director.

“Our goal is to bring the Primavera Sound spirit and vibe to cities with a similar feel: creative, colourful and welcoming. And with this, to give something new to the city, to show a new side and new possibilities to be built and harvested together. So it’s a dream to finally say: yes, it had to be Los Angeles.”

“The festival is a forward-thinking exploration of music and culture, and it will offer a unique and powerful experience to connect with fans,” comments Smith.

The lineup and ticketing information for Primavera’s LA event will be announced in the coming months. A limited number of early bird tickets will be released on 7 June 2019 at 9:00 a.m. PST. More information can be found on the Primavera website, and through social media channels.

The 2019 edition of Primavera Sound Barcelona took place from Thursday 30 May to Saturday 1 June, with headline performances from Miley Cyrus, Tame Impala, Solange and Rosalia. The festival made a “public commitment to gender equality” this year, booking as many female acts as male across its line-up.