Primavera Sound has called time on its 2021 event, cancelling its planned 20th-anniversary celebration for a second year in a row, despite having shown that live music need not lead to an increase in Covid-19 infections with its Primacov clincal trial.

In an announcement today (2 March), the Barcelona festival says its 20th edition “deserves a party like the ones we are used to, and the global situation does not seem favourable” towards being able to go ahead without significant restrictions this summer. Headliners for Primavera Sound 2021, which sold out in record time, were Gorillaz, the Strokes and Tame Impala, with FKA Twigs, Tyler the Creator, Iggy Pop and Disclosure also set to perform from 2 to 6 June.


As in 2020, all tickets remain valid for the delayed Primavera Sound 20 in June 2022. Ticketholders who would prefer a refund will be able to make a request from 2 June, when the 2022 line-up will be revealed.

“We have reached this painful decision due to the uncertainty surrounding the legal framework for large events on the original dates of the festival,” say organisers, “which, added to the restrictions that currently exist, mean that we cannot work normally on the preparation of the festival nor ensure that, once the date arrives, it can be celebrated. Although it is painful, we know that this is the right decision, especially for those of you who have to plan your trip in advance.

“The 20th anniversary of Primavera Sound deserves a party like the ones we are used to, and the global situation does not seem favourable to allowing something like this to happen”

“We have left no stone unturned: we led the clinical trial carried out at the Apolo in Barcelona last December and we have been in constant contact with the health authorities to explore all possible solutions. But the 20th anniversary of Primavera Sound deserves a party like the ones we are used to, and the global situation does not seem favourable to allowing something like this to happen this summer. At least not in a way in which we can live the full Primavera Sound experience.”

The Primacov study at the Apolo, organised by Primavera Sound in association with Barcelona’s Hospital German Trias, found that concerts held with rapid coronavirus testing in advance are “not associated with an increase in Covid-19 infections”.

Primavera Sound announced a series of physical concerts in Barcelona, Coliseum Nights, set for 26 April–2 May, earlier this month.

The 20th-anniversary Primavera Sound Barcelona will now take place from 26 to 30 August, as the festival shifts back three months to avoid disruption from the ongoing coronavirus pandemic.

Both Primavera Sound music festival and Primavera Pro, the industry conference that runs alongside it, will take place at their original venue, Barcelona’s waterfront at the Parc del Fòrum.

The events typically takes place at the start of June – Primavera means ‘spring’ in Spanish – with organisers using the slogan: “Primavera in summer, for once in a lifetime”.

Tickets already purchased for both festivals and the conference remain valid for the new dates.

Primavera Sound experienced record ticket sales following the release of its line-up this year, with over 10,000 fans snapping up tickets in 24 hours to see the likes of the Strokes, Massive Attack, Iggy Pop, Lana Del Rey, Kacey Musgraves, Tyler the Creator, Beck, Bikini Kill and Disclosure.

Organisers state they “will make every effort to ensure that this change affects the festival’s programme as little as possible.”

Ticket sales will be reactivated once the country’s official state of emergency, declared on 14 March, is over.

“Let’s all face this together. We will get through this together. And we will celebrate our 20th anniversary together,” reads a statement from organisers.

Primavera is not the only Spanish festival to change dates due to coronavirus.

Mallorca Live has moved from mid-May to 8 to 10 October, with organisers stating that 80% of the line-up has so far been retained for the later date. The 25th edition of Viña Rock festival will also take place in October, moving from dates at the end of April.

Mad Cool festival director Javier Arnaiz confirmed his intention to continue with the 2020 festival to Spanish newspaper El País last week, saying “our aim is for the festival to go ahead on the original dates. We are positive despite the cirumstances. Suspension is not a part of our plans.” Spanish festivals including Sónar (18 to 20 June), Arenal Sound (28 July to 2 August), Bilbao BBK (9 to 11) and FIB are all currently going ahead as planned.

The approach differs from that seen in the UK in recent weeks, with the cancellation of the major events including Glastonbury Festival, Download, Isle of Wight, Parklife, Lovebox and All Points East.

This week’s line-up announcement for the 20th-anniversary Primavera Sound has led to “the most significant surge in sales in the history” of the Barcelona festival, with more than 10,000 tickets sold in the space of 24 hours, according to organisers.

Tickets for Primavera Sound Barcelona went on sale at 10am local time yesterday (16 January) via new ticketing partner Dice, on the back of positive press for its 2020 line-up, which features 211 artists from 35 countries, including the likes of the Strokes, Massive Attack, Iggy Pop, Lana Del Rey, Kacey Musgraves, Tyler the Creator, Beck, Bikini Kill and Disclosure.

As in 2019, when Primavera called time on “pale, male and stale” festival bills, the Primavera Sound 20 line-up is gender-balanced, with at least as many female performers as male.

“Primavera Sound wants to thank the audience, the media and the sponsors for the enthusiastic reaction to a line-up that is committed to uniqueness and to artistic independence,” reads a statement from promoter Primavera Sound SL.

“[This] line-up is committed to uniqueness and to artistic independence”

Primavera Sound Barcelona is – alongside festivals in Oporto, Los Angeles and Benidorm – one of four Primavera Sound events planned for the tastemaking festival’s 20th year. (A fifth, in London, was called off late last year.)

Taking place on Barcelona’s waterfront at the Parc del Fòrum, the festival has added an extra day for Primavera Sound 20, which will run from 3 to 7 June. The closing party on 7 June will extend the electronic Primavera Bits programme to another day, and feature beachfront DJ sets by Disclosure, Nina Kraviz, Black Coffee and more.

Full festival tickets are priced initially at €195 plus booking fee (increasing once 80% are sold) and available exclusively from Dice. 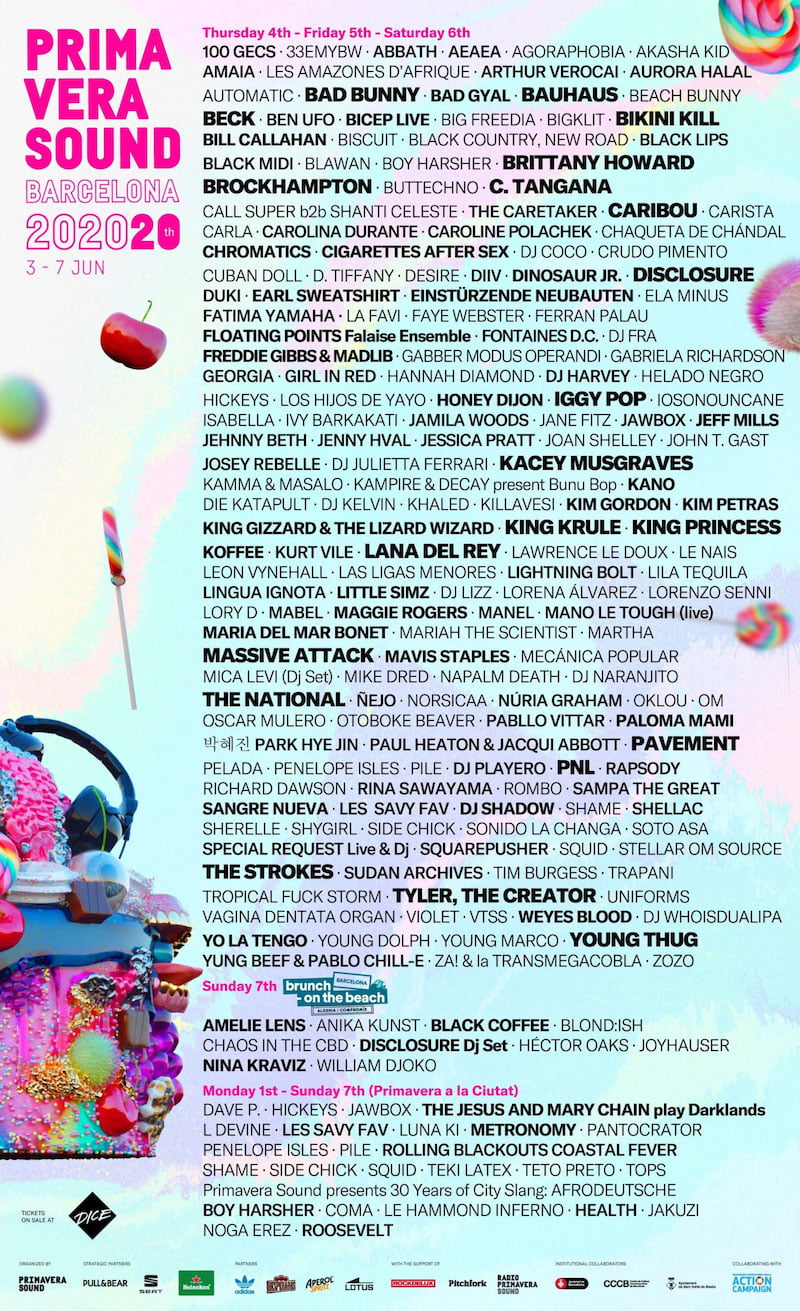