The band’s spiritual home may be the garage, but they were born in a bar – specifically the basement of Frankie’s Pizza in Sydney. On Jacklin’s birthday in 2014, a group hug led to all ten participants vowing to form a band. “Only four of us remembered the next day,” notes Hughes.

United by fern puns and a love of leisurewear, the band met up whenever schedules would allow, writing songs and playing smatterings of dates to an increasingly devoted audience. Eventually, it was decreed that this was no side project and an LP should follow. The result is one of the most enjoyable albums of 2018. “It feels really good,” Jacklin says with satisfaction. “It’s like having an alter ego.”

Olivia Hally and Pepita Emmerichs met in secondary school in Melbourne, drawn together by a shared love of songs with no boundaries or expectations. The duo, now both 24, have since released three EPs, but it’s their debut album, Stadium Cake, that truly showcases their uniquely compelling collaboration.

Oh Pep! have been performing for years, first around Australia and touring internationally since early 2015. They’ve performed at CMJ, SXSW and Nashville’s Americana Music Festival, and for Seattle’s KEXP and NPR’s Tiny Desk. The duo has also played Glastonbury, toured with Valerie June, Nathaniel Rateliff and the Night Sweats and Lake Street Dive.

A sophomore album is scheduled for release in October 2018.

Hailing from the Sunshine Coast, the Chats are punk trio Eamon Sandwith, Josh Price and Matt Boggis, who have been making music together since meeting in their high school music class in 2016.

The Chats released their eponymous first EP in late 2016, and followed that up with another EP, Get This in Ya, in July 2017. Despite living in a place where opportunities for bands are scarce, the trio are among a slew of young acts making a name for themselves in Australia’s thriving underground music scene, thanks in no small part to viral anthem ‘Smoko’, which has racked up more than three million plays on YouTube, and brought them to the attention of Queens of the Stone Age, who they will be supporting during their Australian tour in August and September. 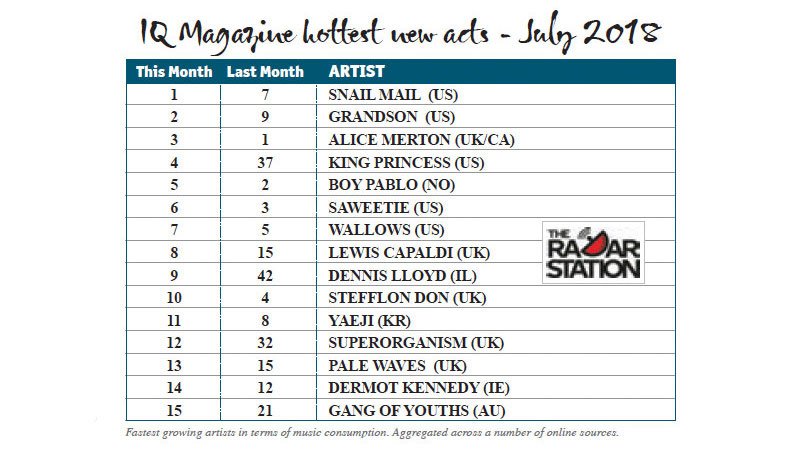