Black Rebel Motorcycle Club is the latest act to be announced for Under the Southern Stars, Australia’s first concert series featuring international artists since the lockdown of March 2020.

Promoted by Andrew McManus’s One World Entertainment, Under the Southern Stars comprises 12 shows across Australia in March.

Joining Black Rebel Motorcycle Club is fellow American bands, Cheap Trick and Stone Temple Pilots, as well as British band Bush – all of which will act as rotating headliners across the tour. Other performers will include local acts Rose Tattoo and Electric Mary.

The tour, originally scheduled for March 2020, has been twice postponed due to coronavirus restrictions.

The promoter says it had to jump through “every regulatory hoop imaginable” before receiving the green light.

Australia recently reopened its international border for the first time in nearly two years. The country imposed some of the world’s strictest travel bans after shutting itself off in March 2020 due to Covid.

Under the Southern Stars is currently the only tour featuring international acts scheduled to take place in the coming months, after One World Entertainment was forced to postpone the Kiss ‘End of the Road’ tour until August/September 2022.

“Under the Southern Stars will without a doubt rock audiences to the core and give them what they’ve all craved since March 2020 – a line up that features the bands and the music they love – both Australian and international artists up in front of them in the flesh and playing their hits, live…it has been way too long!” 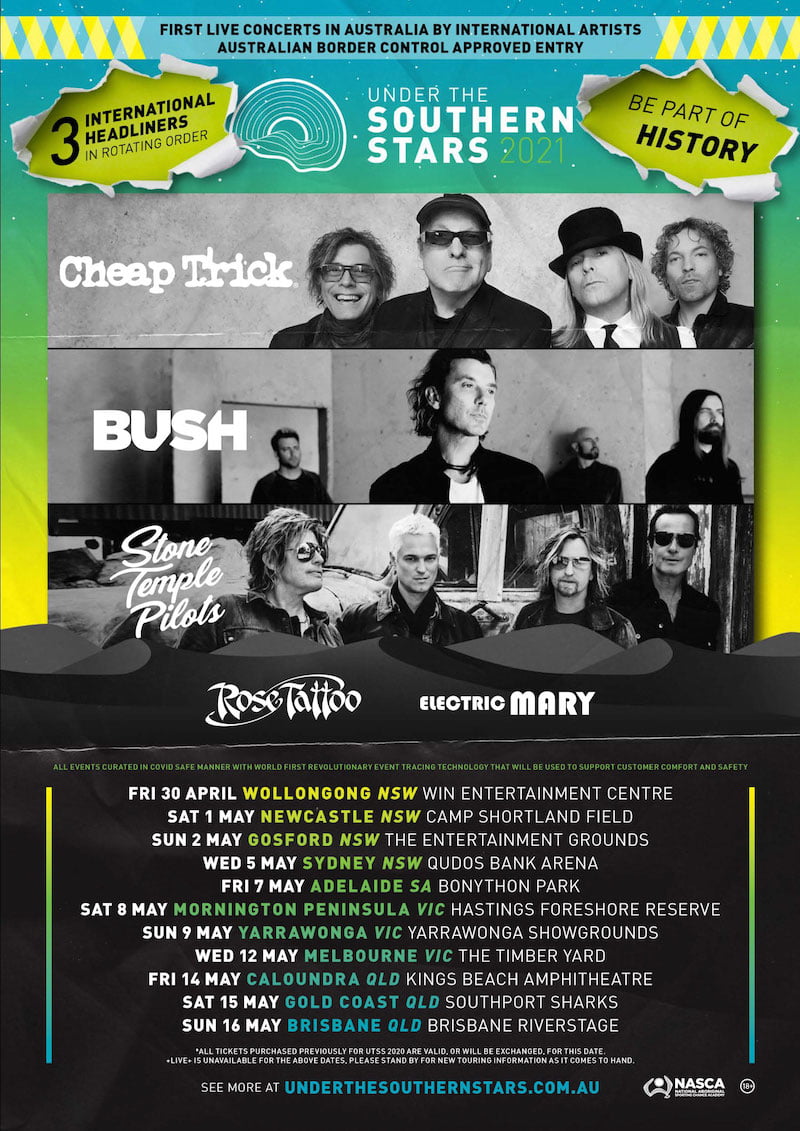 An Australian concert promoter who confessed to attempting to pervert the course of justice, which carries a maximum sentence of 14 years’ jail time, has escaped a prison sentence.

One World Entertainment founder Andrew McManus – who in August admitted the charge, which concerned the disputed ownership of a suitcase containing A$702,000 in cash – was on Friday sentenced to 20 months in prison, but will serve his sentence in the community, according to Sydney Morning Herald’s Patrick Begley.

Sydney district court judge Mark Williams ruled McManus had shown remorse for the crime and is unlikely to offend again.

McManus, who has promoted shows by major acts including Kiss, Fleetwood Mac, Aerosmith, Whitney Houston and The Beach Boys in Australia and New Zealand, was one of five people arrested in September following the discovery of the suitcase in a room at the Hilton Hotel in Sydney in 2011. In 2012 he told police the cash related to a business deal he had arranged for Owen Hanson, a “very good friend of a friend”, to secure a ZZ Top tour, but that he needed it back to fund a Lenny Kravitz tour. “In essence, I delivered back 700 grand I now need to borrow it again,” he said. “As quickly as possible.”

McManus said he lied about the source of the money, traced by police to an international drugs syndicate, in return for an underworld loan to fund a Lenny Kravitz tour

While McManus eventually claimed the money was his – “It’s not the proceeds of crime, it’s the proceeds of Andrew McManus… I gave someone 700 large, and you’ve found someone with 700 large. It’s my 700 large,” he said – police were previously told the occupant of the Hilton room, Sean Carolan, was minding it for his business partner, peptide entrepreneur Owen Hanson Jnr, and then that Hanson was investing it in Carolan’s weight-loss company.

McManus told the court on Friday he lied about the source of the money – which police traced to an international drugs syndicate – in return for an underworld loan to fund the Kravitz shows. At the time, he said, he was depressed and hooked on drink and drugs.

The leader of the drug ring, American Owen ‘O-Dog’ Hanson, was sentenced to 20 years in prison earlier this year.

The tenth Raggamuffin Music Festival has been postponed until November amid weak ticket sales and “an extremely busy events market in Auckland”.

The news was announced on Friday by festival promoter Andrew McManus, of Melbourne-based One World Entertainment, just over a week before the reggae and hip-hop festival was due to kick off.

McManus announced last month that the tenth Raggamuffin, scheduled for 18 February at Auckland’s Trusts Arena (4,901-cap.), would be its last. Headliners are Six60, Shaggy and The Wailers with Julian Marley.

“Ticket sales for the festival have slowed in recent weeks and appear to have been impacted by various factors, including an announcement that train services will now not be available on the event date due to track work being done,” says McManus.

“Patron comfort, security and the importance of protecting local suppliers is paramount and was at the forefront of this decision. With these factors in mind we have no option but to postpone Raggamuffin X to November 2017.

“This will give us time to work through campaigns and the overall success of the project, both in New Zealand and for associated concerts in Australia.”

McManus faces up to 14 years in prison after pleading guilty last August to perverting the course of justice. He will be sentenced in March.