Nearly two thirds of Canadians of all ages have attended a live entertainment event this year – with that number rising to almost three quarters among young people, reveals Nielsen’s latest Canada Music 360 report.

A total of 59% of Canadians have seen music or other entertainment live in 2017 – a 4% increase so far on last year – with 81% of those events dedicated to live music.

The figure for ‘millennials’, meanwhile, is even higher, reaching 70% among Gen Y-ers. 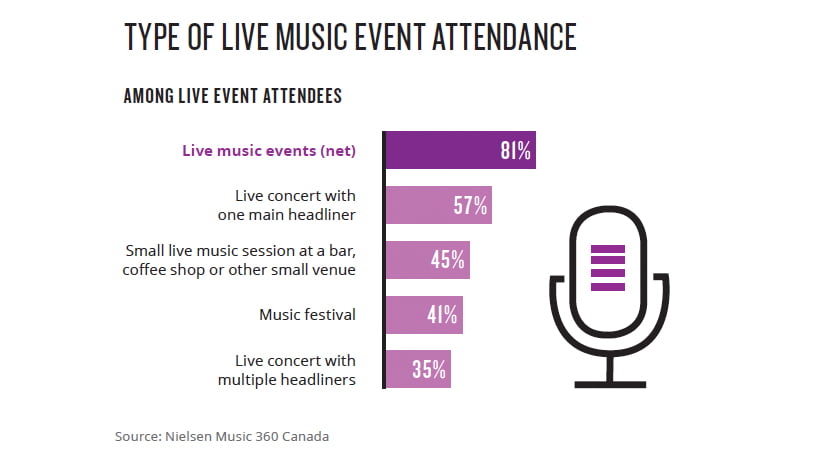 Overall consumption of music is also up across the board, with increases in both streaming and traditional radio listenership.

“This is an exciting time for Canadian music, as the industry is experiencing tremendous growth at home and around the world,” comments Nielsen’s head of music for Canada, Paul Shaver. “With both new and established music platforms continuing to flourish, there’s never been a more dynamic time to be involved with this business.”

Last year’s Canada Music 360 found that over half of all music spending in 2016 was on live, with Canadians “attending more, and spending more of their money, on live events”.

Live performances at Sunday’s 59th Grammy Awards generated an instant sales bump, with a 207% increase in downloads of the songs performed on the day of the show, according to initial analysis by Nielsen.

According to the market measurement firm, the songs shown in CBS’s 12 February broadcast sold more than 178,000 downloads that day, compared to 58,000 on 11 February.

Awards-wise, Sunday’s biggest winners included Adele, who swept the major categories over rival Beyoncé; David Bowie, who posthumously won every award for which he was nominated; and Chance the Rapper, who won best new artist and won plaudits for his gospel-influenced performances.

A full list of winners can be viewed on The Recording Academy website, while Billboard has all the performances (ranked by senior editor Joe Lynch from “worst to best”).

Instagram is American concertgoers’ social network of choice, with 83% of those active on social media at shows making use of the photo-sharing app – more than any other platform.

That’s according to new research by Nielsen, which also found found Instagram users are more likely to attend live music events – particularly shows with live DJs – with 39% of Instagrammers saying they’ve attended a concert with one main headliner (compared to 23% of the US general public) and 24% a music festival (compared to 11% of the general public).

(A study by MIDiA Research in June found 76% of US concertgoers post on social media while at the gig.)

In addition to taking photos and videos, music fans on Instagram (IG) are also more likely to use their smartphones for “various activities while attending live events”, such as buying music, visiting the artist’s website and ringing friends to let them hear the show.

In September Live Nation CEO Michael Rapino said the promotion giant is tapping into IG users to drive the sale of tickets. “[Instagram is] one of the best converters for us,” he explained. “If you’ve already liked Rihanna on Instagram and you’re following her, we use that data feed.”

An infographic showing Nielsen’s findings is below: 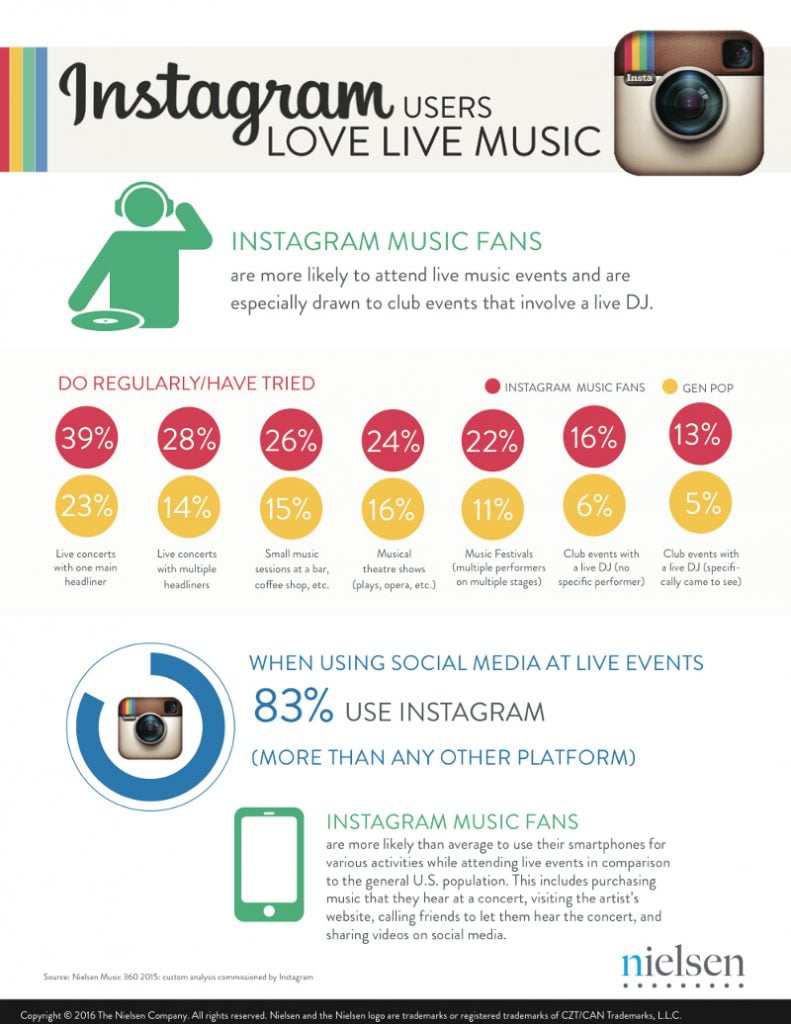 Over half of Canadian music spending on live

Over half of all spending on music in Canada last year was on live events as concerts, music festivals and live DJs – along with paid streaming services – displace physical media and digital downloads in Canadians’ spending habits.

While “music listening in Canada remains as popular as it ever has been, driven by new music services and great new music by homegrown superstar artists (Drake, Bieber [and] The Weeknd to name a few)”, says market research firm Nielsen in its third Music 360 Canada report, released on Thursday, “what continues to change is how fans are accessing and engaging with music. While physical album sales continue to decline, Canadians are attending more, and spending more of their money, on live events.”

The report reveals that spending on concerts, festivals and DJs collectively make up 48% of the Canadian market (at 31%, 11% and 6%, respectively), with festivals and DJ events particularly popular among millennials and teenagers. A full breakdown can be seen in the graph below: 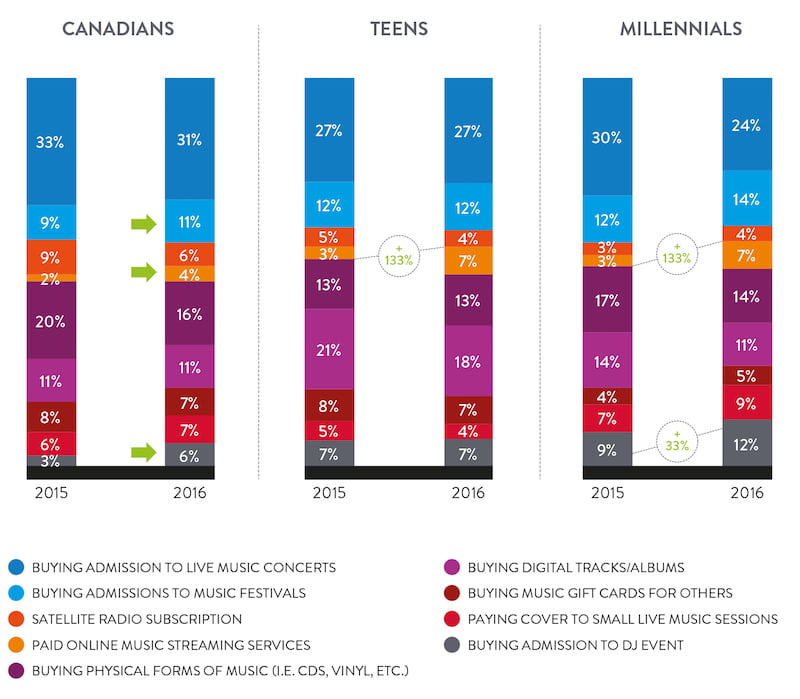