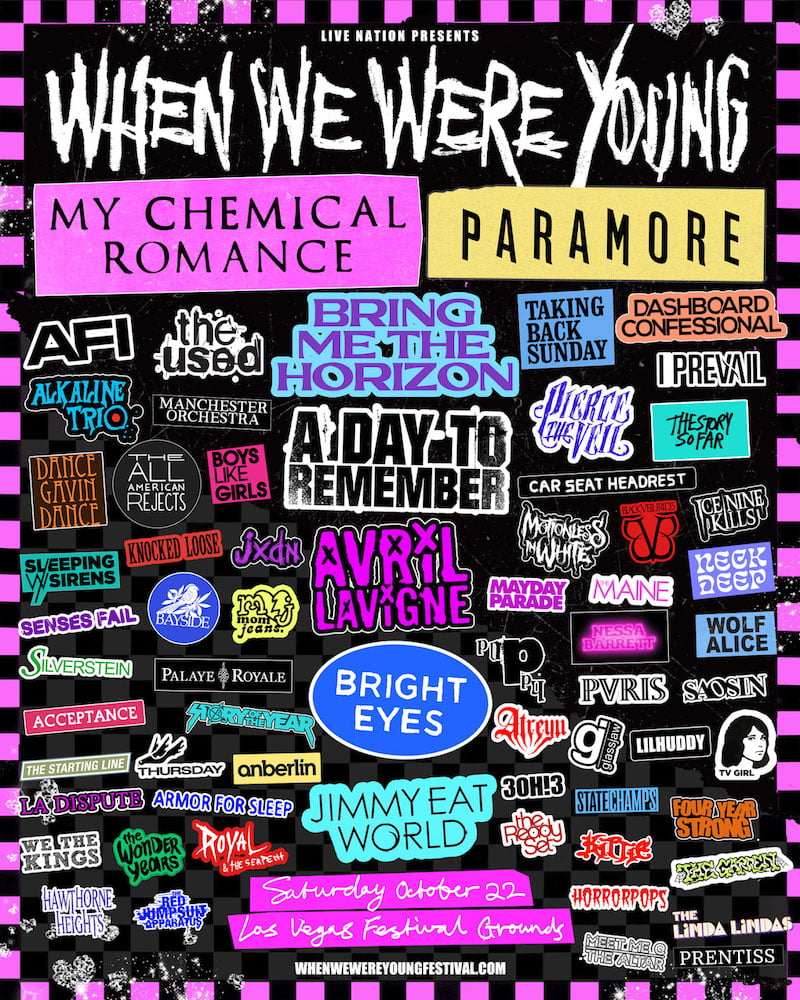 Music and sports brands are capitalising on the growing popularity of face masks, with bands including My Chemical Romance, Korn and Megadeth, and the US’s National Basketball Association (NBA), among those to have begun producing their own cloth face coverings.

Though the WHO says face masks only need be worn by those symptomatic with Covid-19, or caring for those who are, many countries, including the US, are now recommending non-medical face coverings be worn in public. Among those responding to the demand are the NBA and its sister league, the Women’s NBA (WNBA), which announced on Friday it would donate all proceeds from its new masks to charities Feeding America (US) and Second Harvest (Canada).

“As a global community, we can all play a role in reducing the impact of the coronavirus pandemic by following the CDC [Centers for Disease Control]’s recommendation to cover our nose and mouth while in public,” explains Kathy Behrens, the NBA’s president of social responsibility and player programmes. “Through this new product offering, NBA and WNBA fans can adhere to these guidelines while joining in the league’s efforts to aid those who have been directly affected by Covid-19.”

In the music world, thrash metal act Megadeth are sending their fans face masks featuring the band’s Vic Rattlehead mascot, while post-hardcore band Thursday are repurposing existing merch to create masks, the sales of which will go towards making more. Nu-metallers Korn, meanwhile, created masks featuring their logo in early March, which quickly sold out. Fans can now pre-order a new batch set for release on 8 May.

According to trade body Licensing International, the NBA “opened the licensing floodgates” to branded face masks

Recently reformed emo heroes My Chemical Romance will release their masks – originally created for a show in the desert that never materialised – on 29 May, donating all proceeds to the Covid-19 relief fund established by Grammys charity MusiCares.

“We are living in strange times, alienating times, scary times,” reads a statement from the band. “These masks were the brainchild of our beloved Lauren Valencia, who died before this madness, not of the Covid-19 pandemic, but the older evil that is cancer. We had these masks made to keep you dust-free in the desert, a show that never happened, never will – a protection that then seemed timeworn.

“And here we are, with these masks, as though Lauren was prescient or we were unknowingly waiting for the right time…”

According to US trade body Licensing International (LIMA), the NBA/WNBA masks – along with the launch of MaskClub.com, featuring masks with the Batman logo, Hello Kitty, Care Bears, Scooby-Doo and others – “opened the licensing floodgates” to branded face masks, with more launches expected in the near future.

The Australian prime minister Scott Morrison has advised against all “non-essential” mass gatherings of over 500 people, effective from Monday (16 March).

The announcement follows yesterday’s statement from organisers of Australian festival Byron Bay Bluesfest that the event was to go ahead as planned.

A statement released by the Bluesfest team reads: “We are now awaiting the official requirement from Federal and State authorities on Monday and will update you at that time.” Updated (16 March): Bluesfest executive chairman Peter Noble today issued a statement cancelling the festival, saying “it is obvious we will not be on this Easter. We are heartbroken as we believe we were presenting one of the best ever bills of talent for you.”

Leading Australian promoters Frontier Touring an Chugg Entertainment today issued a statement that “a number of concerts will no longer be able to proceed as scheduled”, including shows by Jimmy Eat World, Marc Rebillet, Kip Moore, Miranda Lambert and Seaforth.

“Frontier Touring and Chugg Entertainment are presently working with all artist teams to determine if dates can be rescheduled to late 2020 or early 2021,” reads the statement.

“For ticketholders, tickets will remain valid for rescheduled dates and they will be notified directly as soon as details of new dates are confirmed. Where concerts cannot be rescheduled a full refund will be available for all tickets purchased through official ticketing agencies.”

The promoters note that concerts by New Order, Gengahr and Julia Jacklin will proceed as scheduled over the weekend.

In Melbourne, Robbie Williams’ upcoming concert as part of TEG Dainty, Apollo World Touring and Westbrook Inc.’s World Tour series has also been called off, along with the Australian Grand Prix. The concert was to take place at the Lakeside Stadium within the Grand Prix racetrack on Saturday.

“We appreciate that this is very disappointing news for the fans due to attend the show and all ticket holders will receive a full refund and will be contacted by Ticketek shortly,” reads a statement from World Tour Melbourne and TEG Dainty.

The news follows the cancellation of Miley Cyrus’ World Tour Bushfire Relief show at the same venue earlier this week.

The Australian editions of Download Festival, set to take place in Sydney and Melbourne on 20 and 21 March, have also been cancelled.

Headliners My Chemical Romance pulled out of headline appearances at the festivals, as well as all other performances in Australia and New Zealand today, “given the current global situation”. The band have also cancelled upcoming tour dates in Japan.

“Given that this announcement has come barely eight days prior to Download Australia we will not be able to secure an alternative headliner as there is insufficient time to secure visas and arrange the other relevant logistics that are required prior to the festival,” reads a statement from organisers.

“As we are unable to deliver a complete line-up, we have very reluctantly made the decision to cancel Download Australia 2020″

“As we are unable to deliver a complete line-up to meet the standard that Download fans both expect and deserve, we have very reluctantly made the decision to cancel Download Australia 2020.”

The team says it is working with My Chemical Romance and fellow headliners Deftones “to schedule separate headline shows in Australia in 2020”, as well as with other Download acts to arrange “headline shows in Sydney and Melbourne next week”.

All ticketholders will receive a full refund via Moshtix.

In the wake of event cancellations, the Australian live performance industry has called on the government to supply a stimulus plan to support the business in the event of significant loss of trade.

“We believe it’s possible to design measures that are targeted, scalable and temporary in terms of their budgetary impact, and which could be lifted once the current public health crisis is resolved,” comments Live Performance Australia chief executive, Evelyn Richardson.

The financials of a pandemic: Brokers talk coronavirus

With over 17 years in the industry, Ikuta has worked on the tours of acts including the Rolling Stones, Bon Jovi, Aerosmith, David Bowie, the Eagles, Destiny’s Child, Beyoncé, Maroon 5, John Mayer and Norah Jones, as well as local acts X Japan and Yoshiki.

Ikuta, who most recently served as vice president of major Japanese promoter Udo Artists, will focus on touring both international and domestic acts in Japan. He will report to Live Nation Japan president John Boyle.

The Japanese live music market has reached new heights in recent years, generating consecutive record-high revenues in 2017 and 2018. According to IQ’s Japanese market report, the music market in the country is currently the second biggest in the world, behind the US and ahead of Germany.

“We have made immense progress in Japan over the last couple of years bringing an increasing number of artists to Japan, from clubs shows to 50,000 capacity shows at the Tokyo Dome,” says Boyle.

“Japan’s live entertainment market continues to thrive, and Live Nation has fast become a serious player in its growth and success”

“By welcoming Ikuta, an esteemed industry veteran into the team, we are furthering our commitment to the Japanese touring market while enabling us to really move our business forward to meet the ever-growing demand for international concerts.”

Ikuta comments: “Japan’s live entertainment market continues to thrive, and Live Nation has fast become a serious player in its growth and success.

“I’m extremely proud to be joining the talented team here at Live Nation and will work with them to bring more world-class acts to the region and connect the biggest and best acts both locally and globally to even more fans in Japan.”

Land of the rise in fun: Why booming Japan is such a tough market to crack

Artists and music industry professionals have taken to social media to pay respects to late artist manager Lauren Valencia, who died following a battle with cancer.

Valencia joined Roc Nation in 2012 and worked with artists including Grimes and My Chemical Romance.

“Our hearts are heavy,” says Roc Nation chief executive Jay Brown. “We’ve lost a family member in the physical world but we know Lauren’s spirit will continue on until the end of time. She lived in love, happiness, empathy and camaraderie. The world is a better place because Lauren walked among us.”

Members of My Chemical Romance, who Valencia managed in their last years as a band, also paid tribute to their former manager.

“You were the best manager a girl could ask for”

“You were a light that kept me going when times were really hard,” writes former frontman Gerard Way. “You were there for every show, every early morning flight and lobby call. The world is dimmer today, but I will always have your light to get me through.”

The band’s former guitarist Frank Iero describes Valencia as “one of the kindest, most hardworking people”, crediting the manager as “the only reason anything got done” in the band’s last years.

Canadian singer-songwriter Grimes, who was managed by Valencia at Roc Nation, also pays her respects, saying “for the last seven years you were the best manager a girl could ask for.”