Carey, who has also worked as a publicist for artists including Elton John, David Bowie and the Who, is charged with driving growth in Norway-based TicketCo’s UK festival division.

TicketCo launched in the UK last year and has since secured clients including Coalition Agency, Ministry of Sound, Tobacco Dock, Junkyard Golf and several sports teams. The company also has offices in Poland and Sweden.

Carey comments: “I’m joining TicketCo at an exciting time; the company is making excellent progress in taking the UK ticketing and event payments market into the new digital world.

“There is so much scope to drive positive change in the festival industry and TicketCo will continue to be one of the frontrunners of the digital disruption in the coming years.”

TicketCo’s technology is compatible with Android and iOS devices and enables organisers to push offers on food, drink and merchandise in advance of events. The system can also send QR codes to eventgoers’ smartphones, which are then scanned at entry points to gain access.

David Kenny, TicketCo UK country manager, says: “Paul is a fantastic addition to our growing team of industry experts. His track record in the festival and music industries is incredible and we believe he will make a real impact in this space with TicketCo.”

The long weekend of 12–14 July was one of the biggest in recent memory for the Ticketmaster UK team, with more digital tickets processed at greenfield sites than at any time since the technology’s introduction.

A third of tickets at Trnsmt in Glasgow (Friday 12–Sunday 14 July) were mobile-only, and 100% of Ticketmaster tickets at Lovebox (12–13 July) and Citadel (14 July), held in Gunnersbury Park, London, were delivered to fans’ mobile phones.

Festivalgoers were reminded in advance to download tickets using the TM mobile app; for those that didn’t, wifi hotspots were set up in the queue so getting into the festival was as quick as possible.

A transfer function, meanwhile, enabled fans to pass tickets to the phones of other people in their party – every person needed their own individual downloaded ticket – meaning Ticketmaster and the festivals knew every person entering the site (rather than just the buyer), reducing ticket fraud while increasing in- and post-event marketing potential.

“Our team scanned more mobile tickets than ever before at events across the UK last weekend, with 100% of tickets at Lovebox and Citadel delivered to fan’s mobiles,” explains Andrew Parsons, managing director of Ticketmaster UK.

“It was a fantastic outcome for us and, most importantly, the fans”

“What we saw was the fast and frictionless entry of fans into the shows they love, along with a significant reduction in ticket fraud. A further benefit of mobile tickets is that we now know the individual attendees who walked through the festival gates, so we’ve increased our marketing potential even further.

“We’re in the business of happy fans, and it’s clear from a very successful weekend that mobile is the way forward.”

Rory Bett, CEO of Lovebox and Citadel promoter MAMA, adds: “This was our first foray into using mobile tickets at Lovebox and Citadel and we’re pleased to say it was huge success. It was one of the most effortless experiences we’ve had getting fans on site, and quick, too.

“Together with the Ticketmaster team it was a fantastic outcome for us and, most importantly, the fans. We’re now looking ahead to the rest of the festival season and beyond.”

A majority of people would support greater measures to control mobile phone usage during live shows, according to a new survey of British eventgoers.

According to research conducted by ComRes on behalf of Eventbrite, of the 1,031 UK adults who have attended a ticketed live event in the past 12 months, 70% say they find it irritating when other people take pictures and video during the performance; 69% agree that some action should to be taken to minimise it; and 65% say using their phone to capture images could make them feel as if they were missing out on the event itself.

However, more than a third of respondents say taking pictures or filming is an important part of the live experience.

The research also found that:

The majority of those who have attended a live event in the last year would support some action being taken to manage mobile phone use, such as creating ‘no-phone zones’ (13%), gentle nudges to make phones more discreet (41%) or audience spot-checks for over-filming (17%).

Lee Hadlington, associate professor in cyberpsychology at De Montfort University in Leicester, says the survey shows a contradiction between expectations of other people’s mobile usage and how they see their own behaviour.

“You’ve got a paradox,” says Dr Hadlington. “People are saying, ‘It’s OK if I use my phone at an event, because I want to get this special photo, but when someone else does it, that’s really annoying.’”

Of the surveyed industry professionals who offered an opinion, approximately four out of five had concerns about people recording pictures and videos during performances, but a majority (63%) had no measures in place to manage mobile phone use.

Eventbrite’s head of marketing, Katie McPhee, says: “Go to any stadium gig and you’ll be met with a forest of arms holding up mobiles and blocking lines of sight, so people behind feel irritated. Our report confirms that there is a general agreement between audiences, artists and promoters that using your phone during a live performance can be detrimental to the live experience – both for yourself and for those around you – and that it should be managed.

“We hope that our new report provides a starting point for a healthy discussion on how we can all ensure to make the most out of live experiences with or without our mobile phones.”

A similar survey undertaken by Skiddle last year found 27% of gig-goers under 30 thought mobile phones should be banned outright at shows.

More than a quarter of gig-goers under 30 years old think mobile phones should be banned at concerts because filming and photography is distracting and takes away from the experience, according to a survey by ticketing company Skiddle.

The firm consulted 1,200 people aged 16-30 and found of the 27% of people who wanted the devices banned, 20% said it was because they block your view of the band. 37% said they were distracting and 34% said they take away from the experience.

Of the 74% who said mobile phones shouldn’t be banned, over half (52%) said they capture footage because they like to relive the experience once they have left the event. Nearly a quarter (24%) said they like to share the music experience on social media and 13% said if they have bought a ticket it is ‘”their right to use their phones as they wish”.

Commenting on the results, Skiddle director Ben Sebborn said: “The issue of banning mobile phones at gigs is one that has been hotly debated in recent months. We found the results of this survey particularly interesting because of the age of respondents. Typically banning filming and photography is an opinion most commonly associated with older generations – however this survey shows that many younger people agree that live music experiences are best enjoyed without handheld technology present.

“However, despite the issue been highlighted by artists, gig-goers and venues on an almost weekly basis, it does appear that an overwhelming majority (74%) think that filming and photography should be allowed at live music events, which shows any crackdown will result in a high proportion of unsatisfied music fans.

“Whatever your opinion, it’s clear that this is a contentious issue that isn’t going to go away and it will be interesting to watch the debate unfold as opinion becomes more and more divided.”

At a time when a growing number of artists are taking a public stand against the use of mobile phones at their shows (we’re looking at you Alicia Keys, Adele, Kate Bush and Jack White), Radiohead – never a band to follow the crowd – bucked the trend by actively encouraging fans to live-stream their headline slot at Secret Solstice in Reykjavik last Friday (17th June).

In advance of the show, the British band posted on their w.a.s.t.e. website that “if any fans [want] to set up their own Periscope stream of the show for the benefit of the rest of us, we have a few wi-fi codes to hand out to help things run smoothly”.

Plenty obliged, and many of the streams are still active:

Fans around the world are experiencing @radiohead live on #Periscope from #SolsticeFestivalhttps://t.co/vEioU8SJPo

IQ earlier this month reported on a study by MIDiA Research which revealed digital and mobile now dominate event discovery, ticket buying and sharing and opined that: “The use of smartphones in events is an invaluable form of brand promotion and can be leveraged to build engaged future attendee lists through tactics such as image competitions on social platforms”. (Radiohead, evidently, agree.)

If nothing else, the embrace of Periscope and live streaming by a band as big as Radiohead will hopefully help our Nova Scotian accidental broadcaster feel a bit less foolish – until The Cure jump on the anti-phone bandwagon, at least…

Glastonbury 2016 ‘most connected festival ever’

BT-owned EE (Everything Everywhere), which will install the festival’s 4G network, says it will make Glastonbury “the most connected [open-air] music festival in the world” and expects festivalgoers to use 15TB of data – 20 times more than in 2011, the last time Coldplay headlined.

The network, which is Glastonbury’s technology and communications partner and also co-develops the festival’s app, will install a sixth temporary mobile antenna at Worthy Farm  and implement ‘4G Calling’-branded voice-over-LTE technology to allow phone calls to be made over the 4G network.

“People in the UK are using their mobiles more than ever before to share cherished experiences,” says EE’s director of brand, Spencer McHugh. “2016 has already seen 4G data usage increase by at least 40% at other major events year on year, and this trend shows no sign of slowing down. Each year social media feeds all over the world are flooded with images and videos of Glastonbury Festival, so, in anticipation of the huge demand we expect to see at Worthy Farm this June, we’ve tripled our 4G capacity thanks to a number of new innovative network technologies.”

Glastonbury today confirmed the full line-up – which includes new additions Tame Impala, Tom Odell, Catfish and the Bottlemen, Disclosure, Damon Albarn and the Orchestra of Syrian Musicians, Highasakite and and more (was that Radiohead rumour a dud?) – and stage timings for the 2016 festival, which takes from 22 to 26 June in Pilton in Somerset. Here’s the poster: 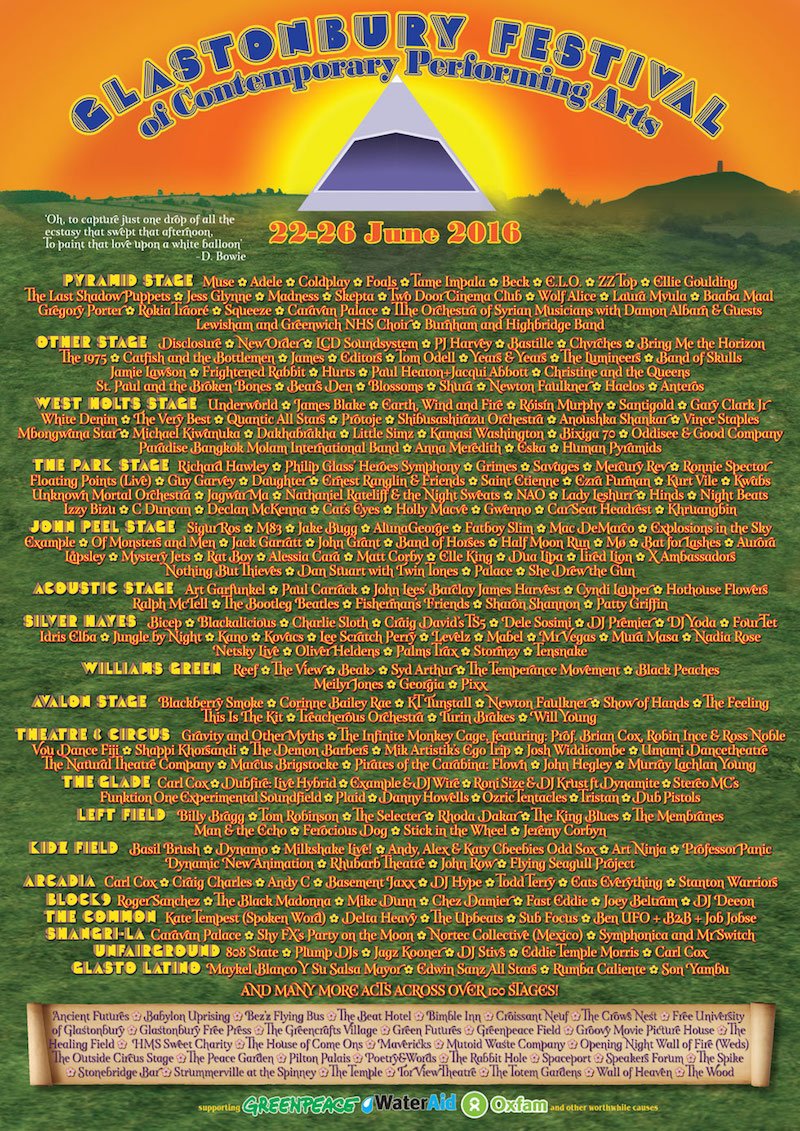