‘As disappointed as our guests’: Germany cans summer fests

“Since major events play an important role in spreading infection, they remain prohibited until at least 31 August 2020,” reads a news release from the German federal government, which had yesterday (15 April) given the go-ahead for shops and schools to reopen.

Among the affected events are nearly all of Germany’s summer festival fixtures, including MLK’s Rock am Ring and Rock im Park, FKP Scorpio’s Hurricane and Southside, Goodlive’s Melt and Splash! Festivals and Superstruct’s Wacken Open Air and Parookaville – with the likes of Goodlive’s Lollapalooza Berlin and new festival Superbloom (both 5–6 September) spared from the ban by a matter of days.

For FKP Scorpio – which, in addition to its flagship twin open-airs, is also calling off Highfield, Deichbrand, Elbjazz, Limestone and Mera Luna – the decision, although “a clear and important safety measure”, is a source of sadness for the entire company, says founder-CEO Folkert Koopmans.

“All of us are bitterly disappointed”

“It goes without saying that these cancellations, like the entire unprecedented [Covid-19] situation, make us very sad, even if we fully support the political decision to protect the population,” comments Koopmans. “Our whole team has been working with countless partners for a long time in preparation for the summer festival season, and is as disappointed as our guests.”

Thomas Jensen, co-founder of metal festival Wacken Open Air, which sold out its 2020 edition under a day, echoes: “Our whole team has been working intensively on the festival these last months, and all of us are bitterly disappointed that we are not allowed to celebrate a Wacken Open Air together with our visitors and the bands this year.”

Similarly sold out were Rock am Ring and Rock im Park, promoted by CTS Eventim’s Marek Lieberberg Konzeragentur, which would have celebrated 35 and 25 years in 2020, respectively.

“For the organisers, the artists and the 175,000 fans who wanted to celebrate 35 years of Rock am Ring and 25 years of Rock im Park in the first weekend in June, this decision is of course disappointing,” reads a statement from organisers.

“Nevertheless, the producers unreservedly support these inevitable measures in the interests of the safety and health of everyone involved, however sad we are over the cancellation of the festivals.”

Lieberberg on growth plans (and bribing the weather god)

Live Nation GSA president and managing director Andre Lieberberg has said the company is pursuing a strategy of “aggressive but organic growth” two years after its effective acquisition of Marek Lieberberg Konzertagentur (MLK).

MLK, said Lieberberg – the son of MLK founder Marek, who is now Live Nation GSA’s CEO – had a “conservative approach to growth” throughout the 13 years he worked there. “Marek always said, ‘We only do our own events,’” he told IQ editor Gordon Masson at Reeperbahn Festival today. “It wasn’t like we had a clear strategic path of having to grow for growth’s sake, or post increasing numbers every year. On the one hand that was a good thing, but also hindered you, to some degree, in being more aggressive and ballsy in what you can do.”

Lieberberg told Masson being part of an “American company listed on the stock exchange” is “of course very different to what we were used to” – but that Live Nation GSA (Germany, Switzerland and Austria) is a “more rounded company” than MLK: “We’re still a promoter but we’re also a media company – for example, we’ve just set up a sponsorship and brand partnerships division…

He said the company also has different attitude towards hiring. “All three MDs all Live Nation GSA agree on growth by staffing,” he explained. “Everyone had to be approved by Marek before, which has obviously changed.”

As for acquisitions, Lieberberg insisted LN GSA is “not going to buy up every festival in Germany” – “we wouldn’t have the money even if we wanted to,” he joked – “but certainly there are going to be more partnerships over the next five years.” The company made its first acquisition, of Openair Frauenfeld, in July, although, as is standard for Live Nation, founder Rene Götz will continue to run the festival.

He added that he “understands the concern from independents” (promoters) about Live Nation’s entry into the German market, “but I don’t see that we’re a threat to them. […] Since we became Live Nation we haven’t done anything to shrink anyone else’s output, or marginalise them in any way.”

Masson also asked about the Lieberbergs’ Rock am Ring festival, which was once again partially cancelled this summer, this time over after a terrorism scare, later revealed to be the result of a spelling error. In 2015 and 2016 festivalgoers were injured by lightning strikes, with the final day of the 2016 event called off altogether.

“We’re still looking for a way to bribe the weather god,” joked Lieberberg. “We’ve had four years of Murphy’s law” (the festival was forced to move in 2014 after a falling out between MLK and the Nürburgring racetrack), “so I’m hoping next year will be better!”

German police have said a spelling mistake was to blame for the disruption of the first day of this year’s Rock am Ring festival.

Johannes Kunz, chief of the Rhineland-Palatinate state police force, says the names of two Syrian nationals working at the festival were misspelt on the list of staff provided to police by promoter Marek Lieberberg Concert Agency (MLK).

At the time, authorities suspected an Islamist terror plot in the state of Hesse, and when the two men’s names could not be found on the list, the decision was made to evacuate the festival.

“The names of the suspects were misspelt,” Kunz tells the Allgemeine Zeitung.

Roger Lewentz, Rhineland-Palatinate’s interior minister, says in future festivals should be forced to provide authorities with photographs of all staff “so a clear identification is possible”.

Festivals around the world have stepped up security in the aftermath of two years of terrorism, most recently at Manchester Arena in the UK. MLK announced shortly before Rock am Ring 2017 and sister festival Rock im Park that backpacks would be prohibited in the festival arena as a result of the “horrendous attack in Manchester”.

Rock am Ring bans backpacks (but bumbags are OK)

Following the “horrendous attack in Manchester” earlier this week, Marek Lieberberg Konzertagentur has announced that backpacks will be prohibited at this year’s Rock am Ring and Rock im Park.

Following in the footsteps of Wacken Open Air, the German sister festivals will be rucksack-free zones this summer, with keys, wallets, mobile phones and bum bags/fanny packs the only personal items allowed into the main festival arena.

That includes any drinks containers – including water bottles – although the festivals will provide free water on site.

In German, a full list of prohibited items is pictured below (no selfie sticks!): 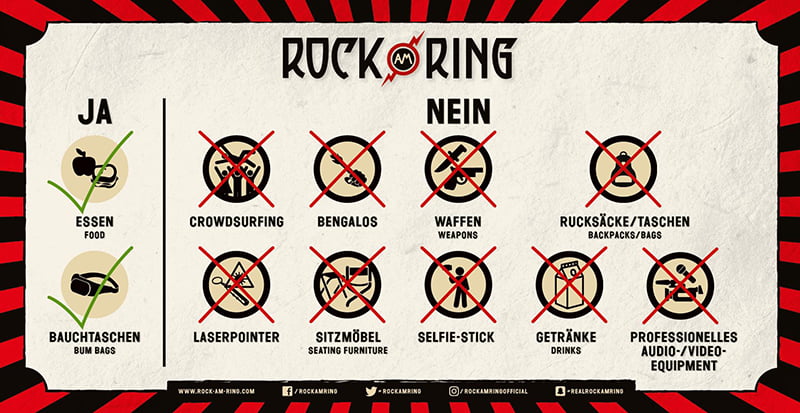 Promoter Marek Lieberberg on Tuesday paid tribute to those who lost their lives in Manchester, calling the bombing of Manchester Arena “an attack on our freedom, culture and [way of] life”.

Marek Lieberberg Konzertagentur (MLK) is to provide a partial refund to Rock am Ring ticketholders after severe storms forced the cancellation of the final day of the festival.

Over 70 people were struck by lightning as inclement weather battered the festival site in Mendig, Germany, in the first weekend in June. Law firm Dittmann & Hartmann, representing 21 festivalgoers, announced shortly after it was seeking “50 per cent of the ticket price” as a refund; promoter MLK has offered a slightly lower 40%.

Christian Gollner, legal secretary of consumer rights group Verbraucherzentrale Rheinland-Pfalz, says the offer seems a “fair price”. “We are pleased that the organiser has now reacted and has established a clear procedure for the refund,” comments Gollner. “We hope now that there will be no delays or disputes in the repayment.”

Rock am Ring attendees who still have their original tickets should visit the festival’s website, where they can apply for a refund to CTS Eventim customer service.