Event payment start-up TicketCo has received £4.6 million in private investment, as the company looks to increase its presence across Europe.

Founded in Norway in 2013, TicketCo has since launched in the UK, Poland and Sweden. Its technology is compatible with Android and iOS devices and enables organisers to promote offers on food, drink and merchandise in advance of events.

The investment will enable the Bergen-based company to continue its growth across Europe, as well as supporting increased sales and operational teams and establishing the company as a licensed European Payment Institution.

“This private investment will enable TicketCo to continue to invest in the innovation that has made our product so appealing and further support continued strategic growth across Europe,” says TicketCo co-founder Carl-Erik Michalesen Moberg.

“This is another big step forward for TicketCo, we believe we’ve designed the perfect sales tool for the events industry and this funding will enable us to take it to the next level.”

TicketCo provides payment services for a number of football clubs in the UK and Norway, and has partnered with London-based Tobacco Dock, Coalition Agency, Ministry of Sound and Junkyard Golf Club in the events space.

TickX to launch across Europe with new £3m investment

UK ticket search engine TickX has revealed plans to accelerate its push into the continent after raising £3m in a series-A funding round.

The Manchester-based company – which launched in Spain last September, joining existing operations in Britain and the Irish republic – says it will put the money towards international expansion, revealing plans to launch in “even more European countries” in the coming months, as well as investing in technology, adding cinema tickets to its platform and growing its team to 35 staff.

The funding round was led by BGF Ventures, the UK’s largest venture-capital firm, which is an also an investor in mobile ticketing platform Dice. Existing investors 24Haymarket and Ministry of Sound also increased their stake.

TickX, which aggregates tickets for more than 125,000 events from major ticket agencies, including Ticketmaster, Skiddle and US-based Headout, made headlines in 2016 after turning down £75,000 in funding from BBC’s Dragons’ Den. It has now raised 40x the amount offered by the ‘dragons’.

“Over a million event-goers last year discovered that TickX is the only place they need to go to discover experiences and buy the best tickets,” says CEO Steve Pearce. “Now, our focus is firmly on international expansion and leading innovation in the multibillion-pound global experience market. The new funding from BGF Ventures and our other fantastic investors will drive us towards becoming the go-to destination for experience-lovers across the world.”

George Mills from BGF Ventures adds: “We are both proud and excited to be backing Steve, Sam [Coley, CTO] and the whole of the TickX team.

“We’ve been seriously impressed by their ambition and pace in building the company, and we’re confident that TickX will continue to expand and reach their goal of becoming the global go-to platform for discovering experiences.”

London-based booking agency Coalition Talent has entered into a joint venture with dance music colossus Ministry of Sound for a range of new live events and brand partnerships.

The “wide-ranging” JV, which sees the two companies partner to “share their resources and expertise”, additionally sees the Ministry of Sound events staff relocating to Coalition’s central London offices. It follows a recent focus by Coalition on building events brands alongside its roster, with recent projects including the Coffee House Sessions concert series and club nights Pure Music Live and Just Can’t Get Enough ’80s, the latter a joint venture with DJ Sara Cox.

“I couldn’t be more proud to enter into this joint venture with Ministry of Sound,” says Coalition Talent CEO Guy Robinson. “This iconic brand has been a huge part of my journey in the music industry, from working with them on talent through to more than a few lost nights at the club.

“We look forward to welcoming the Ministry of Sound events staff into our brilliant team here at Coalition. Our joint focus will be to maximise opportunities for their current offering, and develop additional products to reach new markets, as well as more extensive partnerships with touring DJs and live artists.”

Jonathan Bevan (pictured), CEO of Ministry of Sound, adds: “We are delighted to be launching this new partnership. Ministry’s brands and reputation, coupled with Coalition’s talent relationships, expertise and newly expanded team, will deliver a whole new range of world-class music events.”

Dolby launches Atmos for Music in the US

Dolby Atmos – an ‘immersive’ surround-sound technology with applications in home theatre, broadcast and, especially, cinema – has found a home in one of Chicago’s biggest nightclubs, as audio giant Dolby Laboratories continues the roll-out of its Atmos for Music brand on both sides of the Atlantic.

The installation at Sound-Bar (1,000-cap.), which comprises 30 speakers, 22 channels of audio and a bespoke lighting system, takes advantage of Dolby Atmos’s object-based audio tech to move in sync with the music. It marks the launch of Atmos for Music in the US, and follows the installation of an Atmos system at Ministry of Sound in London in December 2015.

At the time, Bob Borchers, chief marketing officer and senior vice-president of Dolby Laboratories, said Atmos – which, unlike traditional surround sound, allows users to place sounds as ‘objects’ in individual speakers, offering true spatial/3D audio – said the technology had the potential to revolutionise the live music industry. “We have seen how Dolby Atmos transforms the cinema and home theatre,” he said, “and we are confident that it will leave a lasting impact on the music industry, making live music and clubbing more engaging and immersive.”

The first artist to take advantage of Sound-Bar’s Atmos system will be DJ Solarstone (Richard Mowatt), who kicks off the venue’s Atmos ‘residency’ on 29 July.

“With Dolby Atmos technology, I can push the boundaries of what’s technologically possible in delivering my music, providing my fans with a show that will completely immerse them from all angles in the venue,” says Mowatt (pictured).

Haider Rizvi of Sound-Bar adds: “At Sound-Bar, we’ve always been proud to host some of the most dynamic dance music artists in Chicago. By partnering to bring Dolby Atmos to our space, our guests are going to be part of music history in the US.”

Watch TechRadar’s coverage of the Ministry of Sound installation, which includes artists explaining how Atmos works, below:

Ministry of Sound has appointed See Tickets as its primary ticket agency for all events, including those at its flagship London superclub.

Under the terms of the deal, See Tickets – owned by French conglomerate Vivendi – will provide Ministry of Sound with a full-service solution encompassing ticketing, marketing, web development and on-site support. See’s ticketing platform also will power the Ministry of Sound club’s website.

Martin Fitzgerald, See Tickets’ chief commercial officer, says: “The dance and club side of our business has enjoyed significant growth over the last 12 months after an increased focus on development in this area. To be able to announce a partnership with Ministry of Sound, an iconic club and respected brand, is something we are incredibly pleased about.

“To be able to announce a partnership with Ministry of Sound, an iconic club and respected brand, is something we are incredibly pleased about”

“What we have been able to demonstrate to Ministry of Sound is that our powerful ticketing technology will support and enhance the customer journey. We also have a significant customer base and marketing tools at our disposal to ultimately help increase ticket sales.”

Other See club/dance clients include Circuit Clubbing, which manages London’s Fire and Lightbox (both 600-cap.), the Soundwave Croatia festival, Mint Warehouse in Leeds (1,000-cap.) and Love Saves The Day festival in Bristol.

Vivendi Village, the subsidiary that includes the Paris-based company’s See Tickets and Digitick ticketing operations, posted revenue growth of 6.9% in the first half of 2016.

All Reading and Leeds ticketholders will be entered into a ballot to see the Welsh alt-rock group, who will play an acoustic set under the ‘Reading and Leeds Festivals present’ banner. Tickets will be free, bar a transaction fee of £3.50 which will be matched by Festival Republic and donated to charity Martin House.

Biffy Clyro are one of five Reading/Leeds headliners along with Red Hot Chili Peppers, Foals, Disclosure and Fall Out Boy.

V Festival, which takes place in Hylands Park in Chelmsford and Weston Park in Staffordshire on 20 and 21 August, the weekend before Reading and Leeds, also chose today to announce the line-up for its Glee Club Comedy Tent.

The Dutch showcase festival that isn’t Eurosonic Noorderslag, Dice, will return for the second time on Saturday 25 September. The first edition took place earlier this month at the TivoliVredenburg in Utrecht and featured music from emerging artists Boo Seeka, Glints, Isaac Gracie, Lewis del Mar, SWMRS en Yonaka – all chosen in partnership with ESNS, Reeperbahn and The Great Escape and picked from the line-ups of those festivals.

Legendary London nightclub and label Ministry of Sound has announced plans for a new one-day event to mark its 25th year in business.

The M25 Festival – named both for the club’s 25th birthday and, presumably, the ring road that surrounds London – will feature music from Erick Morillo, DJ Sneak and the Haçienda Classical project and promises to “reunite some of dance music’s most legendary names with arenas hosted by A Night In Paradise, in honour of Paradise Garage, and Shoom”. It will take place in Trent Park, north London, on Sunday 7 August – yes, Sunday – “as a nod to early British rave culture”. (DJ Sneak photo by C N on Flickr.)

PJ Harvey, The Last Shadow Puppets, Sia, James Bay, Massive Attack and Young Fathers, Haim, Jamie xx and M83 are already confirmed for the festival, which is promoted by Live Nation-owned Luger and takes place from 11 to 13 August in Slottsskogen park in Gothenburg. (Sleaford Mods photo by Paul Hudson.)

In EDM-land, Electric Daisy Carnival has revealed its entire line-up for its 20th festival, which kicks off in Las Vegas in just over three weeks, in one go.

Prominent among the 250 – count ’em – DJs and performers include Above & Beyond, Kaskade, Armin van Buuren, Hardwell, Martin Garrix, Marshmello, Zedd, DJ Snake, The Chainsmokers and Afrojack, but since there’s no way we’re going to type them all out, here’s that monster bill in full: 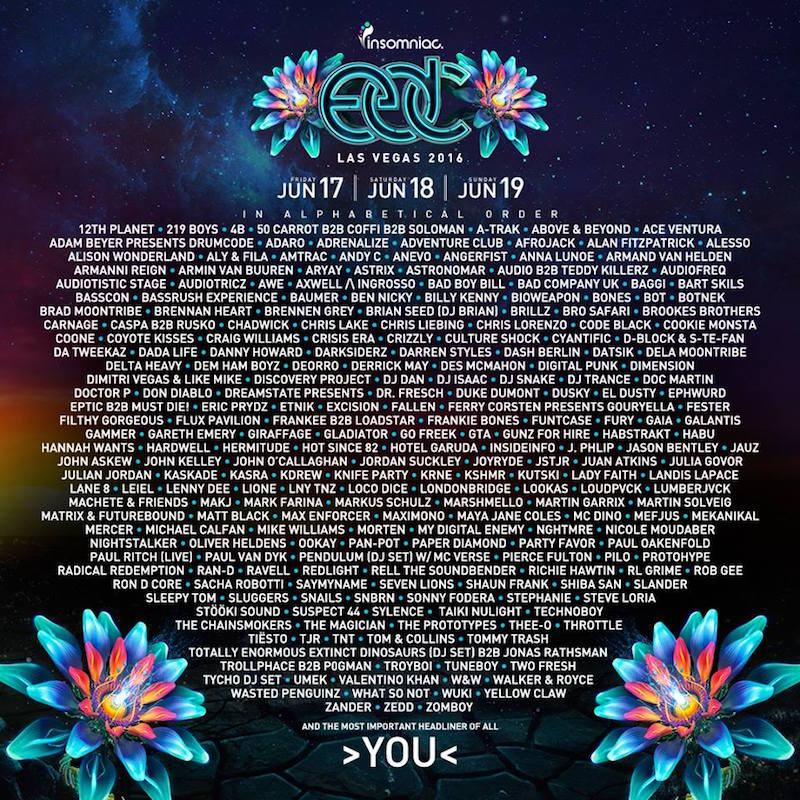 Afrojack will also play SFX/ID&T’s Mysteryland in Haarlemmermeer, the Netherlands, in the last weekend of August.

The long-running dance music event announced yesterday the line-up for its pre- and after-parties, to be held in its ‘Holy Ground’ campsite on 26 and 27 August, respectively. Highlights include “Seth Troxler playing back-to-back with Skream and Tom Trago, Afrojack playing a techno set alongside Benny Rodrigues, Dave Clarke executing a classic techno session and Breach [back to back] with Cinnaman“. (Afrojack photo by Matthew Little/Sara Cooper PR.)

A posting on True to You, a fan site frequently used to put out announcements by website-less Morrissey, says: “As of this date (May 23), Morrissey is not a part of this year’s Chicago Riot Fest.”

Other artists who may or may not be playing include Jane’s Addiction, Death Cab for Cutie, Nas, Sleater-Kinney, NOFX, Deftones and Jake Bugg.