Music by Numbers 2019 – which builds on and replaces the umbrella body’s forerunner Measuring Music and Wish You Were Here reports – reveals the UK music industry continued to grow across every sector last year, with live once again leading the charge.

UK Music, which includes the UK Live Music Group, measures the health of Britain’s music business each year by collating data on its contribution in goods and services – known as gross value added (GVA) – to the UK’s gross domestic product (GDP), including export revenue.

The findings of this year’s report include:

GVA from recorded music also rose, by 5% to £535m – remaining at around half the contribution of the live sector – while total record label revenues grew for the third consecutive year (3% in 2018).

“Our report reveals firm evidence that the British music industry is in great shape and continuing to lead the world,” comments UK Music CEO Michael Dugher. “The figures are hugely encouraging and show that, as well as enriching the lives of millions of people, music makes an incredible contribution to the UK’s economy.

“Live music is now at a record high and continues to draw millions of fans from both the UK and abroad to our arenas and smaller venues alike.

“Music exports are another amazing success story, with the best of British creative talent being showcased across the globe. However, this is not a time for complacency. We face many challenges to ensure we keep our music industry vibrant, diverse and punching above its weight.

“We need to do more to protect grassroots venues by helping them combat soaring business rates. We need to nurture the talent pipeline, including by reversing the decline of music in education, so that children from every background have access to music.

“We need to make sure that creators get fair rewards for their content and are not ripped off by big tech. And we urgently need to ensure that the impact of Brexit doesn’t put in jeopardy the free movement of talent, just at the time when we should be looking outwards and backing the best of British talent right across the world.”

The UK live music industry first broke £1bn GVA in 2016, though the 2018 figure is around £100m higher, indicating continued growth.

Writing in the Music by Numbers 2019’s foreword, culture secretary Nicky Morgan pays tribute to emerging British acts including Sam Fender, Dave (pictured) and Little Simz, and says “the figures in this report are testament to the outstanding creativity of our world-leading artists”. 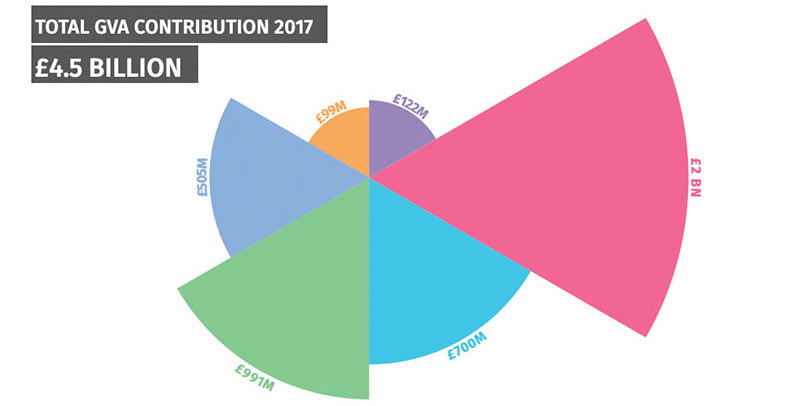 The value of the British live music business topped £1 billion (US$1.35bn) for the first time in 2016, growing by 14% in a remarkable 12 months for the industry.

However, half of those working in the UK music industry say they fear a “negative impact” resulting from Britain’s 2019 exit from the European Union, reveals UK Music’s latest Measuring Music study, with chief executive Michael Dugher warning once again that government must act to end the “cloud of uncertainty” currently hanging over the business.

Measuring Music 2017, published this morning, shows the music industry as a whole – including the recorded sector and publishing – added £4.4bn to the UK economy last year. Live music rebounded after a slight contraction in 2015, while the boom in streaming contributed to 5% growth for recorded music, which was worth £640m.

A full breakdown of the gross value added (GVA) is pictured below: 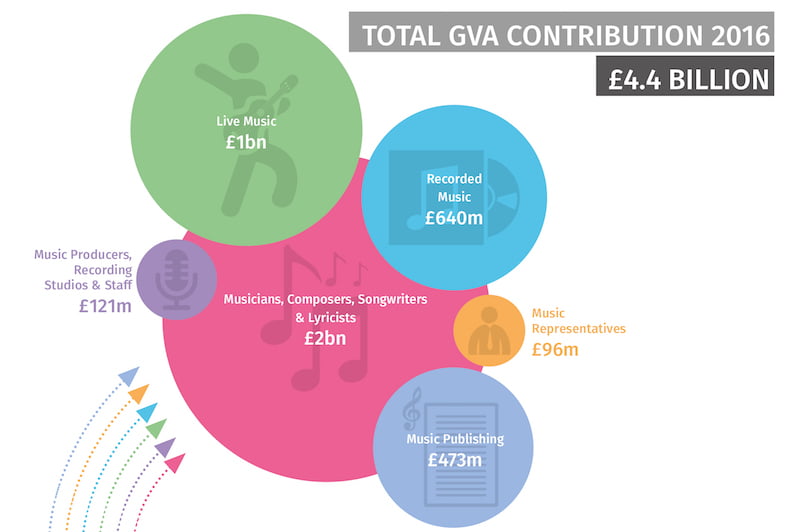 Exports, meanwhile, reached £2.5bn, of which £80m was generated by live music, £421m by recorded music and £964m by musicians, songwriters, composers and lyricists.

The number of music-industry jobs also grew in 2016, with the biggest increase (13%) in the live music sector.

Dugher has previously written for IQ and elsewhere on the need for a Brexit that protects the music industry, and this year’s report included a Brexit survey that asked 3,000 musicians, composers, songwriters, lyricists, producers and artist managers how leaving the European Union would affect, negatively or otherwise, their ability to work in the music business.

“The outlook for the music business is better than it has been in years. But behind the positive top-line figures, there are some clear challenges”

“The headline figures in this year’s Measuring Music report are undoubtedly excellent news,” Dugher writes. “Virtually all sectors of our industry grew in 2016, particularly live music, which soared by 14% to make up £1 billion of the £4.4 billion the music business generated for the UK economy in 2016.

“The number of new jobs created in the UK rose at a faster pace than the rest of the employment market and our export figures shot up across the board. The outlook for the music business is better than it has been in years. But behind the positive top-line figures, there are some clear challenges that could threaten our efforts to cement the foundations for continued growth.”

These, he says, include cuts to music education and the ongoing lack of investment in grassroots venues, which are “where artists need to learn their craft in the first place”, as well as – yes – Brexit.

UK Music (an umbrella organisation whose members include the UK Live Music Group, PRS for Music, the MMF and the Musicians’ Union), Dugher pledges, will “continue to press the UK government to get the best possible deal to protect our 142,208 jobs, to grow our exports and to remove any barriers to trade, especially for touring artists.

“We are a vital part of any industrial strategy. The foundations of our industry must not be negotiated away at this critical time.”