The rapper is headlining the four-day “island holiday experience” offering live music, parties, beach walks and other activities, and has curated a supporting line-up of hip-hop and R&B talent.

Hotel options start at £499, with add-ons such as champagne brunch and cruises, jet ski safari and other VIP packages also available.

“Influencer marketplace” Pollen previously teamed with rock band Bring Me The Horizon on a four-day festival in Malta in May.

Other artist-curated weekenders organised by Pollen Presents include the Unruly Culture Splash Weekender in Croatia with Popcaan, Diplo’s Higher Ground festival in Cabo, Mexico, the Kurupt FM Weekender in Amsterdam, the Netherlands and J Balvin’s Neon Weekender and Justin Bieber & Friends – both in Las Vegas, US.

Founded in 2014 by brothers Callum and Liam Negus-Fancey, London-headquartered Pollen runs two offerings: Pollen Presents, which curates experiences for customers across travel, music, and more; and Pollen+ which partners with promoters and music festivals to offer customers who book through its platforms perks at events.

The company raised US$150 million in a Series C round earlier this year.

Bring Me The Horizon to curate festival in Malta

Bring Me The Horizon have announced plans to curate a four-day festival in Malta next year.

The event, which will take from 26-30 May 2022, will feature a handpicked line-up by the Sheffield rock band, a full live show and an exclusive retrospective set from the band alongside a host of club nights, pool party takeovers and boat parties.

The line-up and location are expected to be announced in the coming weeks.

The weekender is organised by Pollen, a UK-based startup that develops an ‘influencer marketplace’ for events.

Other artist-curated weekenders organised by Pollen Presents include Diplo’s Higher Ground festival in Cabo, Mexico, the Kurupt FM Weekender in Amsterdam, the Netherlands, J Balvin’s Neon Weekender and Justin Bieber & Friends – both in Las Vegas, US.

“[We’re going to] come up with as much madness as you’d expect from a fully metal, rock festival”

“We’re buzzing to be hosting a Bring Me The Horizon-themed festival in Malta next year, coming up with as much madness as you’d expect from a fully metal, rock festival,” says frontman Oli Sykes.

“As well as our headline set we’re also going to be doing a special throwback set with some songs we haven’t played for years, and have an insane lineup of friends and guests coming out to perform too. It’s basically going to be the greatest weekend ever.”

Pollen, founded in 2014 and previously called Verve, works with organisers, promoters and ticketing platforms to negotiate a certain amount of tickets to an event that will be marketed through the members (anyone who books a group experience), according to Tech Crunch.

The members, in turn, decide which events they want to promote to their networks. Those who manage to shift tickets (which are not sold by Pollen but by ticketing partners), get rewards including free trips, VIP upgrades, and private group events. Pollen generates revenue by taking a cut on each sale.

The startup, which raised $60 million in funding in October 2019, has worked with the likes of Live Nation, Ticketmaster, Eventbrite, StubHub and SeeTickets.

Despite the ongoing coronavirus pandemic, festivalgoers will get their chance to dance in the Mediterranean sunshine this year, with a number of festivals taking place in Greece, Malta, Croatia and on the southern coast of France

The first festival to return, Xlalala Presents-promoted Long Beach Festival 2.0 welcomed 2,000 festivalgoers over two days of performances in the northern city of Pydna from 24 to 25 July.

Although mostly seated, audience members were able to stand and still remain distant from each other at the Terra Republic festival site, which usually welcomes up to 50,000 concertgoers.

Hygiene regulations and temperature checks were in place at the festival, which featured performances from Greek acts including Stelios Dionisiou, Pyx Lax, Villagers of Ioannina City and Planet of Zeus.

Long Beach Festival will return next year with an extended, four-day programme from 4 to 8 August.

Xlalala Presents’ Athens event, Urban Athens, is set to go ahead from 7 to 8 August at Terra Vibe Park with the same line-up.

Also taking place from 7 August is GEM Festival, a four-stage, three-day event on the Greek island of Zakynthos, or Zante, with acts including Andrea Ferlin, Anushka, Paul van Dyk and Romeo Blanco.

The festival has reduced capacity at its 110,000 square-metre site and will not allow camping. Guests will be temperature tested on entry, with those showing signs of a high temperature being tested for Covid-19. Everyone entering the festival’s VIP area will also be tested.

Festivals are also making an appearance this summer in France, with the Panda Events- and Allover-promoted Les Croisières Électroniques (Electronic Cruises) taking place in Cannes Bay from 2 to 9 and 23 to 30 August.

Despite the ongoing coronavirus pandemic, festivalgoers will get their chance to dance in the Mediterranean sunshine this year

The cataraman-based event will see up to 100 music fans a time board from Cannes Bay and Lerins Island for a day of music, dancing and water sports.

With a limited capacity of 5,000, the event is taking place on 12 September. Tickets, €40 regular and €100 for a backstage pass, are available here.

A fifth Maltese festival, Back.In the Future, has been called off due to “lower than expected ticket sales”. The event, due to take place at open-air venues Gianpula Village and Uno Malta from 29 to 30 August, was to feature acts including Chase and Status, DJ EZ and Wiley.

Ticketholders will receive an automatic refund and will also be offered complimentary guestlist entry to Escape 2 the Island and/or Rhythm and Waves festivals, as well as a €50 drinks credit.

Croatia, normally a hotspot of summer festival activity, is far quieter this year as authorities introduce stringent social distancing restrictions. Mainstays including Dimensions, Ultra Europe, Outlook, Sonus and Hideout are among those forced to cancel this year’s edition.

Some are still forging ahead, however. BSH Island festival, set to take place at the Noa Beach Club from 7 to 12 July, was forced to scrap its original format just a week prior to the event, downsizing from 5,000 capacity to 900 for an alternative, socially distanced festival.

Trance and progressive festival Awake is also going ahead in a socially distanced manner. With a reduced capacity of 1,000, Awake will host acts including Cosmic Gate, Paul Thomas and Paul van Dyk from 20 to 23 August on Zcre beach.

Tickets for Awake, including hotel, villa and apartment packages, are available here. Day tickets start from €40 and four-day passes priced at €152.

Malta to host trio of festivals this summer

The southern European island state of Malta is preparing to welcome festivalgoers over the next few months, as it gets set to become one of the only European countries to host large-scale music events this summer.

With one of the lowest rates of Covid-19 in Europe, Malta is lifting lockdown measures – including all international travel restrictions – on 15 July. It is one of 60 countries included in a list of “travel corridors” with the UK, meaning those travelling between the two countries will not need to self-isolate on arrival.

Escape 2 the Island, organised by UK-based promoter Bass Jam, will see artists including Aitch, AJ Tracey, Fredo and Charlie Sloth perform at the Malta Fairs and Convention Centre (MFCC), an indoor and outdoor events venue in the town of Attard, from 28 to 30 August.

The festival is organised in conjunction with the Malta Tourism Authority and Visit Malta. Tickets for the event went on sale on Friday (3 July), priced from €99 for general admission and €129 for VIP.

From 4 to 6 September, Rhythm and Waves festival will take place at outdoor events arena Gianpula Village, with performances from Andy C, Chase and Status, Netsky, Subfocus, Shy FX and Wilkinson.

Tickets are priced from €119 for general admission and €149 for VIP and can be bought here.

The line-up for the festival, which has previously taken place in Mexico, Portugal, Israel and Costa Rica, is yet to be announced. Fans can register for pre-sale tickets and further information here.

The fate of events in fellow Mediterranean festival hotspot, Croatia, is hanging in the balance this year, after authorities banned events from taking place on Zrće beach on the island of Pag last week, leading to the cancellation of BSH Events’ BSH Island festival. It had previously been believed that clubs and events on the beach would reopen this week.

Neighbouring Serbia will host Exit Festival in August, with acts including Amelie Lens, Maceo Plex and Nina Kraviz performing to a 50% capacity crowd at the Petrovaradin fortress in Novi Sad.

IMS College, which aims to offer delegates a “crash course in electronic music”, returns to the Mediterranean island from Friday 7 to Sunday 9 July after a successful debut last year.

“As IMS approaches its first decade, it feels right for us to put even more focus on inspiring the new generation of producers, performers and industry protagonists,” explains IMS co-founder Ben Turner. “IMS College Malta year one was a revelation for us: a different approach to curating a summit, considering the audience was so open to absorbing all forms of education and instruction about this incredible culture of music. We thank our partners and the government of Malta for seeing the value in taking such an approach to educate whilst we entertain.”

Up for grabs are two tickets, worth €70 each, which grant access to both days – and all associated keynotes, panels, workshops and masterclasses– and all three nights of the summit, including night-time DJ sets by Sven Vath, Agoria, Richie Ahmed and Todd Terry.

More information on the summit is available at www.internationalmusicsummit.com/college. 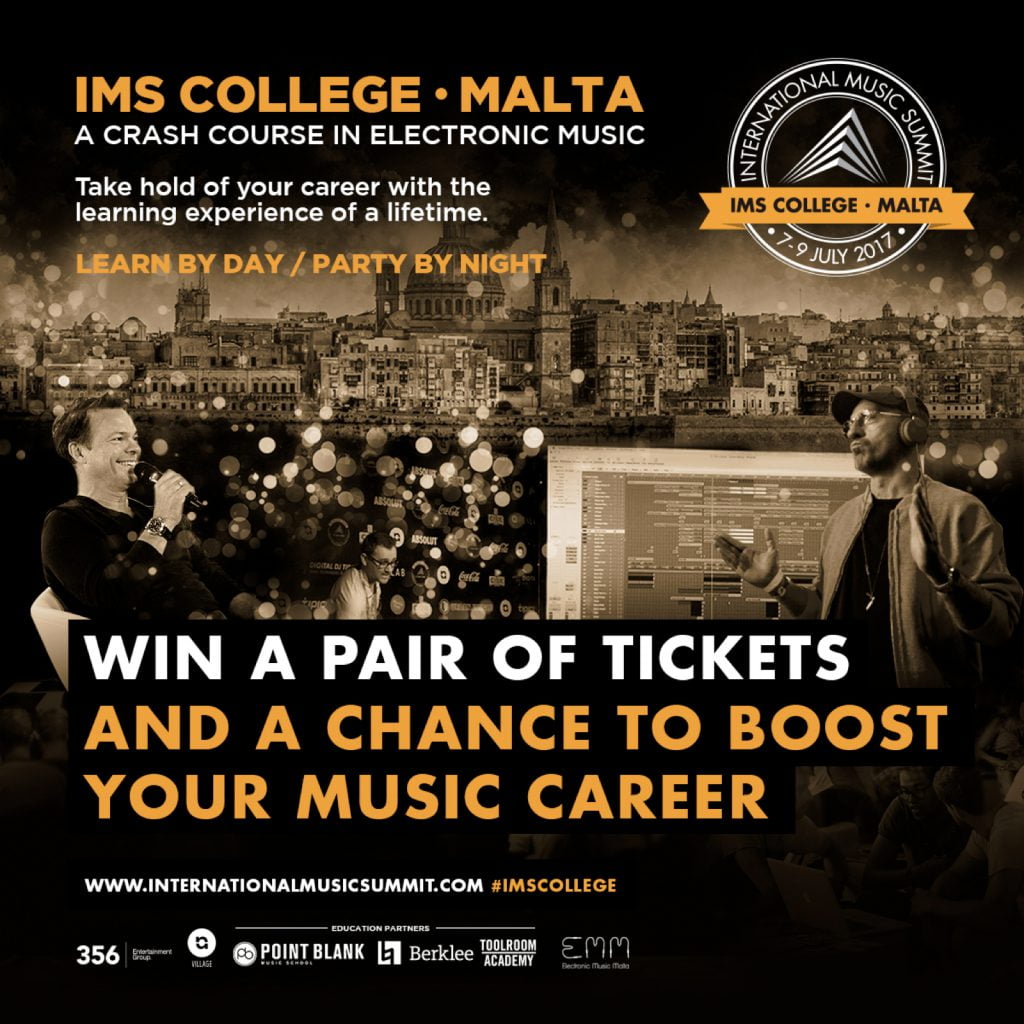