Metallica has announced a 46-date world tour, which will see them play two dates in every city they visit but with a new setlist and different support acts on each of the nights.

The M27 outing comprises 23 ‘No Repeat Weekends’ in Europe, North America and South America between April 2023 and September 2024. Venues on the tour are yet to be announced.

The tour, produced by Live Nation and presented by Liquid Death and Blackened American Whiskey, will premiere a new in-the-round stage design that relocates the famed Metallica Snake Pit to centre stage.

Fans will have the option of purchasing a single-day ticket, a two-day ticket or an ‘I Disappear’ full-tour pass. For the first time, discounted tickets will be available for fans under 16 years of age.

A portion of proceeds from every ticket sold will go to the band’s All Within My Hands foundation, which is dedicated to “creating sustainable communities by supporting workforce education, the fight against hunger, and other critical local services”.

News of the tour comes shortly after Metallica announced they would play two unique sets on the Thursday and Saturday nights of the UK’s Download festival.

See the full list of dates for Metallica’s M27 world tour below. 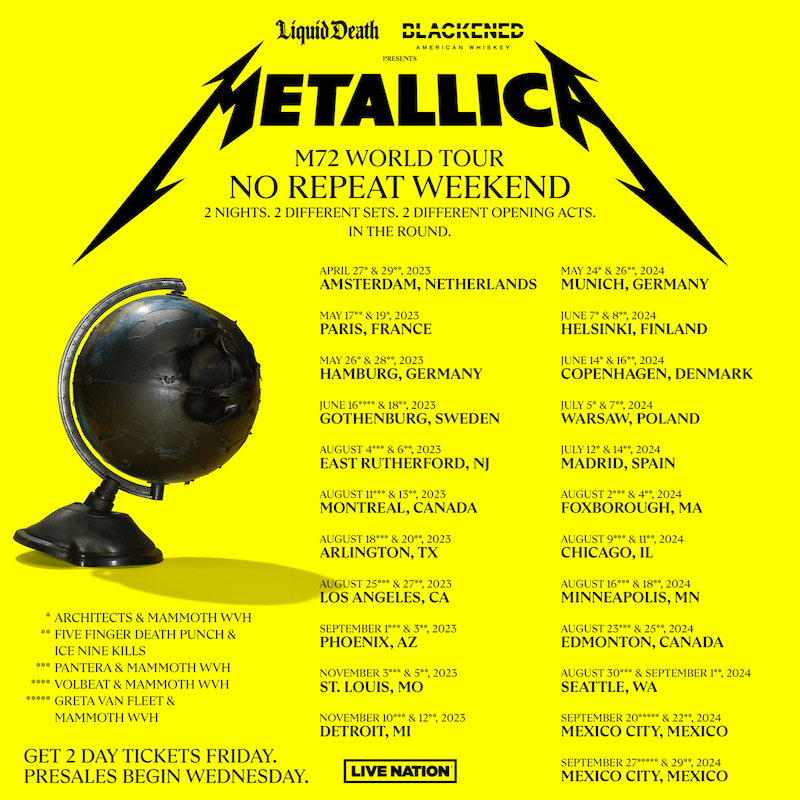 US thrash-metal legends Slayer, along with their management, agent and promoter, were presented with award frames by the SSE Arena Wembley following their last-ever show at the 12,500-cap. London venue.

The awards were handed out by arena GM John Drury and booking manager James Harrison following the sold-out 3 November concert, part of the band’s Farewell world tour. After support from Obituary, Anthrax and Lamb of God, the show kicked off with ‘Repentless’, accompanied by 10ft columns of fire erupting from the stage, and came to a close nearly an hour and a half later with an encore comprising ‘Raining Blood’ and ‘Angel of Death’.

The acquisition of EGO follows last year’s buy-out of Factory Music, and sees the company’s roster of artists, which includes HIM, Fear Factory, Devin Townsend and the Rasmus, also move to London-based K2.

Morewood says: “Yerry and I are delighted to be joining the formidable team at K2 and we look forward to an exciting future with John, having previously worked with him at the now legendary Helter Skelter Agency.”

“We look forward to an exciting future with John”

K2 founder John Jackson adds: “I am delighted to be working with Jim again and we all look forward to welcoming Yerry to K2. Their combined skills will further enhance the strengths of K2 as the leading international hard-rock booking agency.”

Jackson, formerly of Helter Skelter Agency, formed K2 in 2002. He was also the co-founder with Kili’s Stuart Galbraith of the now-defunct Sonosphere festivals.

Metallica last night made history by playing to a record-breaking 22,211 people at The O2 in London, smashing the previous record of 21,000 set by Muse in 2016.

The ‘in-the-round’ format allowed for an extended seating capacity for the US rockers’ two O2 shows, part of the UK leg of their WorldWide tour, which now heads to the SSE Hydro in Glasgow.

To mark the occasion, Metallica were presented with a specially commissioned illustration by The O2’s head of programming, Christian D’Acuna.

He comments: “Metallica smashed the highest attendance record during both of their shows at The O2. It was an honour to host the heavy metal rock gods at the venue and they did not disappoint, delivering an incredible show in the round, full of hits spanning their whole career.

“It’s been a great year for rock bands at The O2, with the likes of Green Day and Foo Fighters gracing our stage and Queens of the Stone Age and Deep Purple still to come. We hope the epic shows continue with our new 6k-capacity standing floor.”

Sharon Richardson, who launched UK-based Factory Music Management and Agency in 2004, will join K2 on 1 October, bringing a roster that includes some of the biggest names in metal to John Jackson’s company.

“We have known and worked with Sharon for many years, and when the opportunity arose for her to join I jumped at the chance,” says Jackson, CEO of K2 Agency. “She will be joining the K2 team headed by Jane Miller, who has worked with me since the early ’80s, and Leo Benton, who joined us four years ago from Newcastle University.

“Sharon will be bringing to K2 her roster of over 20 rock and metal artists, which include Delain, Sabaton, Steve Harris’s British Lion and Metal Allegiance. They join the extensive roster of K2 artists [including] Alter Bridge, Ghost, Gojira, Iron Maiden, Mastodon, Metallica [pictured] and Slayer.”

“We have known and worked with Sharon for many years, and when the opportunity arose for her to join I jumped at the chance”

Richardson adds: “We are extremely thrilled at having the opportunity to join and be part of the K2 team after working with and knowing John for many years. It felt that joining the K2 team is more than a positive step forward and we are delighted to be bringing our roster of artists over to K2.

“I am very fortunate to be joining such a respected company, which prides itself on a top-quality service to [its] roster of artists, and I look forward to an exciting and successful future at K2.”

Jackson, formerly of Helter Skelter Agency, formed K2 in 2002. He was also the co-founder with Kili’s Stuart Galbraith of the now-defunct Sonosphere festivals.