Frontier Touring has announced Music from the Home Front, a special Anzac Day concert featuring some of Australia and New Zealand’s biggest musical stars performing live from their homes.

Taking place this Saturday night (25 April) at 7.30pm in Australia and 9.30pm in New Zealand, Music from the Home Front will be broadcast live on television, on Nine/9Now and Three/ThreeNow, respectively. Performers include Jimmy Barnes, Tame Impala’s Kevin Parker, Ben Lee, Delta Gooodrem, Vance Joy and the Rubens.

The event was conceived by Barnes and Frontier Touring/Mushroom Group founder Michael Gudinski, who explains: “Music From The Home Front is about uniting Australian and New Zealanders through the power of music in a time that we all need a bit of hope and happiness.”

Originally a day to commemorate the Australian and New Zealand Army Corps (Anzac)’s involvement in the Gallipoli campaign (1915–16) of the First World War, Anzac Day now serves as a national day of remembrance in both countries, honouring all Australian and NZ servicemen and women past and present.

Unlike other coronavirus relief concerts such as One World: Together at Home, Frontier says Music from the Home Front is “not a charity fundraiser”, rather “an opportunity for our nations to be united by music and celebrate the things that bring us together”.

“On an Anzac Day like no other, the Australian and New Zealand music community will join together to pay its respects and celebrate the mateship between two great neighbouring nations,” reads a statement from organisers. “While recognising and acknowledging the Anzac message, we also turn our attention to those that are currently fighting on the Covid-19 front line and say, ‘Thank you’.”

Nine’s head of content production and development, Adrian Swift, comments: “Music from the Home Front is a salute from Australia and New Zealand’s music communities to everyone serving our nations under lockdown. From the military this Anzac Day to all those on the frontline fighting Covid-19 and those working to keep food delivered, shelves stacked and streets cleaned.”

A full provisional line-up is pictured below, with more names set to be announced in the coming days: 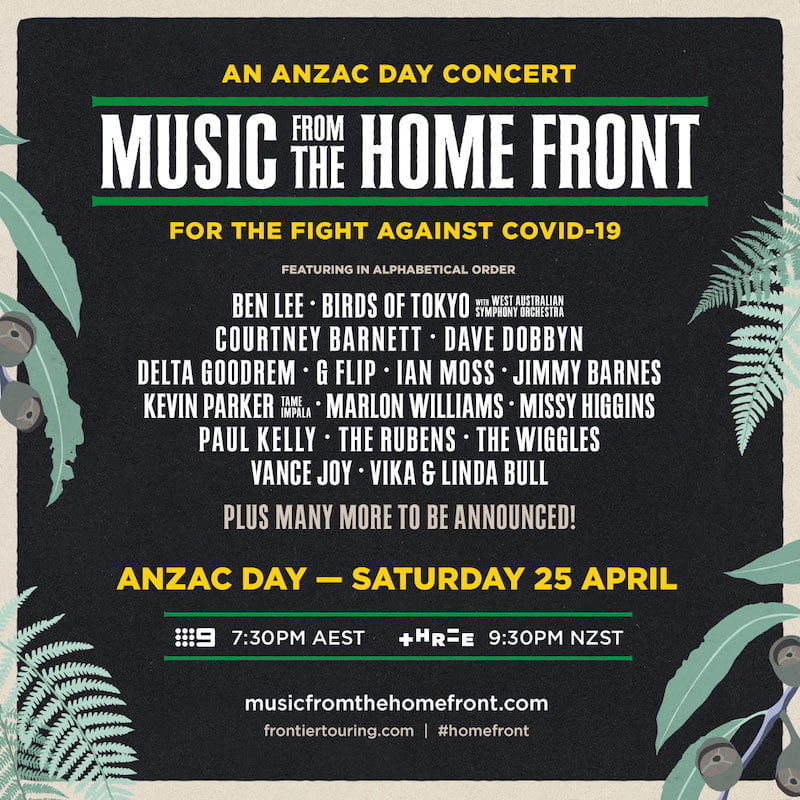