The Dutch government is reserving at least €300 million for a cancellation fund to allow event organisers to plan for the second half of 2021 without the financial risk posed by a potential Covid outbreak.

The guarantee fund – similar to those announced in Germany, Austria and Switzerland – is intended for music festivals, business fairs and sports competitions that attract a minimum of 3,000 visitors and take place in Q3 and Q4 of this year.

The cabinet is considering a 1 July commencement date for the fund as Dutch minister for culture, Ingrid Van Engelshoven, says that it is not “reasonable” to expect that “masses can stand close together on a field” earlier than that.

It is unclear what this will mean for festivals that are scheduled to take place in May and June including Best Kept Secret, Pinkpop, Awakenings and Defqon. 1.

“[This fund] is a dot on the horizon for festival organizers,” says van Engelshoven. “They can fall back on the guarantee fund in which at least €300m has been reserved. The event industry has long come to a standstill due to Corona. Guarantee is needed to get it back on track.”

“The event industry has long come to a standstill due to Corona. Guarantee is needed to get it back on track”

The fund was announced on Thursday (21 January) after almost the entire House of Representatives voted in favour of the scheme the previous day. Along with the fund, the government has announced a new package of economic support measures totalling €7.6 bn which will be rolled out during Q1 and Q2 of 2021.

The government also confirmed this week that the ‘Back to Live’ test shows, which were postponed from January after the Dutch government extended lockdown, will be permitted to go ahead in February.

The Dutch government is the latest to approve a much sought-after event cancellation fund. In September, Switzerland became the first European country to introduce an insurance scheme, totalling CHF 268m, which compensates event organisers a maximum of 80% of the financial loss if their event has been cancelled.

Austria followed suit in October, setting up a €300m fund of its own, and Germany in December, with a government pot worth €2.5bn.

Meanwhile, with European festival season fast approaching, the live sectors in the UK, Denmark and France are lobbying hard for government-backed insurance schemes.

The Dutch government is considering introducing a German-style fund to reimburse organisers whose events are cancelled by coronavirus restrictions.

Following lobbying by the Alliance of Event Builders (Alliantie van Evenementenbouwers), an umbrella group whose members include promoters’ association VVEM and festival/venues body VNPF, calls for a cancellation fund have reached the corridors of power in the Netherlands, with minister of culture Ingrid van Engelshoven said to be close to making a decision on the way forward for live events.

In December, Germany became the latest European country to set up a cancellation fund, worth €2.5 billion, to de-risk the organising of live events while Covid-19 (and associated restrictions on freedom of assembly and movement) is still a threat.

Austria, meanwhile, set up a €300 million fund of its own in October, while pressure is growing in the UK for a similar government-backed insurance fund.

“We are happy to make it a happy new year, but we need a guarantee fund from the government”

A spokesperson for van Engelshoven (pictured) tells the VPRO the minister will announce whether her department is backing a ‘guarantee fund’ by early February at the latest.

Jolanda Jansen, a spokesperson for the alliance, comments: “I am looking enthusiastically at the 2021 events schedule, with major international crowd-pullers, such as the Eurovision Song Contest and [the delayed] Euro 2020, set to really put the Netherlands on the map,” says alliance spokesperson Jolanda Jansen. “In addition, we have a rich festival culture with around 1,200 festivals, from small to large, throughout the country, and we know a large number of clubs and theatres.

“Almost everyone in our industry is eager and ready to get back to work. We are happy to make it a happy new year, but we need commitments and a guarantee fund, on the German model, from the government to continue.”

Following weeks of protests by beleaguered live entertainment businesses, the Netherlands’ government has announced a further €482 million in emergency funding for the Dutch cultural sector.

The new funding, announced today (28 August), follows an initial package of €300m made available to cultural businesses in April.

Speaking to de Volkskrant, Dutch culture minister Ingrid Van Engelshoven – who has been criticised for her perceived slowness to act on behalf of creative businesses, especially in comparison to neighbouring Germany –  says she believes that “the Dutch cultural sector cannot [now] say that their needs are not being met.”

The announcement of the support package follows the Night of Live and #SoundofSilence campaigns, both of which aimed to secure further government support for the Dutch live industry. While live music has to an extent restarted in the Netherlands, stringent social-distancing regulations mean the vast majority of business have been unable to return to any kind of normality.

Businesses including Friendly Fire, Mojo Concerts and arenas Ziggo Dome and AFAS Live have made redundancies to cut costs in recent months.

Of the new money, €200m will be allocated to “large cultural institutions” and the ecosystem of artists and self-employed workers around them, according to de Volkskrant. The AFAS Live arena in Amsterdam illuminated for the recent Night of Live “as they see fit”, with the rest divided between, among other things, filmmakers, museums and the Brown Fleet of historic ships.

€14m is also reserved for events and companies who lost their subsidies in the latest round of Performing Arts Fund decisions.

Some of the Netherlands’ most popular artists, including singer-songwriters Guus Meeuwis and Blaudzun and rock acts de Staat and Kensington, have written to culture minister Ingrid van Engelshoven to demand an end to high ticket prices on the secondary market.

The musicians, who are backed by the opposition Socialist Party (SP), on Monday presented a manifesto to van Engelshoven which called for action on touts, who reap profits from their shows while adding “nothing” to the music ecosystem.

“Our fans pay through the nose, but the profits go to someone who adds nothing – except annoyance [and] lots of frustration,” the manifesto, entitled Stop woekerhandel concertkaarten (Stop profiteering [from] concert tickets), reads. 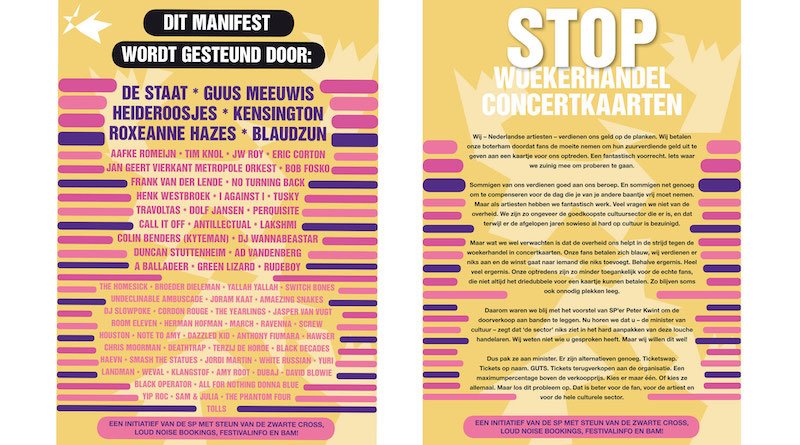 “Performances are therefore becoming less accessible to the real fans, who can not always pay triple [the face value] for a ticket, so many seats are left empty unnecessarily.”

Among the solutions to countering ticket touting mentioned by the artists is the use of blockchain platform GUTS Tickets, which is gearing up for a 36-night run with Jochem Myjer at Amsterdam’s Royal Theatre Carré, in the largest blockchain ticket sale to date.

Van Engelshoven, the minister for education, culture and science, said in March she planned to discuss the issue with industry stakeholders, including Ticketmaster Netherlands, Mojo Concerts and promoters’ association VNPF, to see if any new legislation is needed to curb the problem.

According to Dutch public broadcaster NOS, van Engelshoven has yet to propose any legislation, with the minister believing that an outright ban on ticket touting is unenforceable. However, she hopes for a solution at a European level.

Dutch competition authority ACM dropped its investigation into alleged fraud in the secondary ticketing market in June 2016, after concluding that the regular public outcries over sold-out shows are a consequence of simple supply and demand, or “scarcity and popularity”.

The Netherlands’ government has pledged a further €3.4 million for the Performing Arts Fund NL, which provides subsidies to a number of Dutch music festivals.

The Performing Arts Fund (Fonds Podiumkunsten, FPK) grant, announced by culture minister Ingrid van Engelshoven, will be put towards, among other things, a follow-up to the the Fast Forward initiative, which promoted Dutch talent internationally in partnership with international producers/promoters, FPK announced today.

There are also more funds for the Grant for Dutch scheme, which provides grants to foreign festivals or venues providing a platform for Dutch artists and performers.

The new money forms part of the Performing Arts Fund’s commitments for 2018–2020. Several festivals, including Noorderslag, Amsterdam Dance Event, Welcome to the Village and Into the Great Wide Open, lost their subsidies in the latest round of funding, announced in August 2016, although a partial U-turn that October saw some of the money reinstated.

Van Engelshoven announced an extra €10m for arts and culture last November, with the Performing Arts Fund budget also increased by €9m per year for 2018–20.

Ingrid van Engelshoven, the Netherlands’ minister for education, culture and science, has announced a review of the secondary ticketing market to see if legislation is needed to prevent ticket fraud and the harvesting of large volumes of tickets for resale.

The intervention by van Engelshoven follows a parliamentary question on 1 February by MP Peter Kwint, who asked whether the minister saw anything suspicious in U2 tickets selling out in a few minutes and then immediately appearing on resale site Seatwave. “Can you guarantee that Live Nation, or one of its subsidiaries, does not place tickets directly on secondary ticketing websites such as Seatwave?” he asked van Engelshoven.

“If not, are you prepared to investigate how these tickets are available on this site within a few minutes?”

Van Engelshoven (pictured) responded on 15 March in a letter to the House of Representatives, saying that while “at this stage, it’s too early to draw any conclusions”, she intends to discuss the issue with industry stakeholders in the coming months to establish whether any new legislation is necessary.

“Ae you prepared to investigate how these tickets are available on this site within a few minutes?”

“It is important to get a good picture of the opportunities that are available to address any problems, and if there are any gaps,” she writes. The answer, she adds, could be a technological solution, naming Youp van het Hek and Jochem Meijer as artists who are already using blockchain technology to prevent the resale of their tickets.

“The number of parties that have to deal with this issue is large, and the interests are diverse,” Van Engelshoven concludes, and it “takes time to conduct further discussions and to draw up a thorough analysis. I therefore expect to be able to send a response to the House in the autumn of 2018.”

The ACM dropped its own investigation into the ticket resale market in June 2016, concluding the regular public outcries over sold-out shows are are a consequence of simple supply and demand, or “scarcity and popularity”.