German promoter Goodlive has cancelled the 2021 editions of Melt, Splash, Full Force and Heroes, days after CTS Eventim announced that its stable of summer festivals are taking another year off.

Goodlive’s best-known festival Melt was scheduled to take place between 4 and 6 June 2021 at the Ferropolis open-air museum, in Gräfenhainichen, Saxony-Anhalt, featuring acts including Arlo Parks, FKA twigs and Jamie XX.

“After months and months of hard work, so many different ideas and concepts and hundreds of calls with other festivals, politicians and experts, we have to admit to ourselves that the decision is ultimately out of our hands,” reads a statement on Melt’s website.

“Believe us when we say that we have tried everything to meet you guys in Ferropolis this summer, but due to the current political situation, the uncertainty of the pandemic and lack of prospects we simply cannot continue planning the festival for 4–6 June 2021.”

“Due to the current political situation, the uncertainty of the pandemic and lack of prospects [Melt]i cannot continue planning”

Similar statements have appeared on the social media pages of Splash (originally scheduled for the weekends 8 July and 15 July in Ferropolis), Full Force (25–27 June, Ferropolis) and Heroes (18-19 June in Geiselwind and 23 July in Freiburg).

Each of the statements adds that the festival is “doing everything in our power to get together and have a party later this year, even if it might be in a different setting”.

Goodlive’s newest festival, Superbloom, is still scheduled to make its delayed debut outing at Munich’s Olympiapark and Olympiastadion (75,000-cap.) this September, at the time of writing.

Elsewhere in the German festival market, Superstruct-backed events Wacken Open Air and Parookaville have not yet given up on their 2021 editions.

“[Wacken Open Air’s] late date, on the last weekend in July, allows us to observe the further development of the situation”

“We sympathise with our colleagues, for whom this decision was certainly not an easy one,” said Thomas Jensen, co-founder of Wacken, regarding the cancellation of the CTS Eventim festivals.

“Our late date, on the last weekend in July, allows us to observe the further development of the situation – for example with regard to the progress of the vaccination campaign and upcoming decisions by the federal government – and allows us a longer preparation time,” explains Jensen. “We remain hopeful and continue planning.”

The 2021 edition of the German metal festival is scheduled to take place between 29 and 31 July in the village of Wacken, Schleswig-Holstein. The sold-out event will be headlined by Amon Amarth, Slipknot and Judas Priest.

The Parookaville team is considering postponing the electronic music festival from 16–18 July at Weeze airport to a weekend in September, saying they are “examining all possibilities”.

Superbloom festival to debut in Munich

Miley Cyrus and David Guetta are among the headliners for the inaugural Superbloom festival, which is taking place on 5 and 6 September in the German city of Munich.

Located in the grounds of Munich’s Olympiapark and Olympiastadion (75,000-cap.), the festival will also feature a firework display from RuPaul’s Drag Race: Werq the World, as well as comedy from Kaya Yanar and live podcasts. 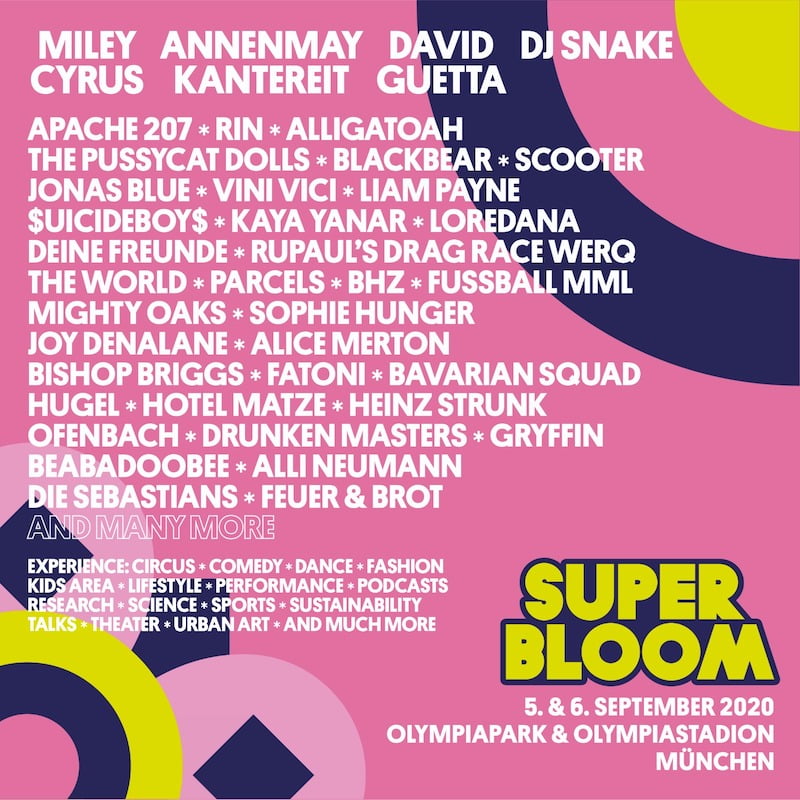