Grammy award-nominated rapper Travis Scott has announced that his Astroworld Festival will return this year with an expanded format due to ‘overwhelming demand’.

The third edition of Astroworld Festival will take place on 5 and 6 November at NRG Park in Scott’s hometown, Houston, Texas, with a line-up curated by the artist himself.

Scott has revealed that he will be headlining Astroworld Festival 2021, which will adopt the theme ‘Open Your Eyes To A Whole New Universe’, while the full line-up will be announced closer to the time.

The previous two events have sold out before line-ups were revealed.

Two-day GA passes will be available for purchase beginning next 5 May at 10 am CT on AstroworldFest.com.

A portion of proceeds from Astroworld Festival 2021 will be donated to the festival’s official charity partner, Cactus Jack Foundation, founded by Scott.

The expansion of the festival follows Astronomical, Scott’s record-breaking in-game concert event which took place in Fortnite in April 2020 and attracted more than 12 million players.

Dice launches in the US

Disruptive UK ticketing company Dice is to launch in the United States, it announced this morning.

Initially offering tickets to shows in Los Angeles and San Francisco (Sam Smith, Khalid, Matthew Dear and Vevo’s SF Hallowe’en event in San Francisco are among its first events), Dice US has big plans for the world’s largest, and most competitive, ticketing market, says Dice founder and CEO Phil Hutcheon.

“We’re focused on a younger demographic that’s fed up with how ticketing is,” says Hutcheon. “They’re disengaging, and we need to be careful because live music is in competition with Netflix, with bars [and] with eating out”.

“If you keep screwing over fans, they won’t come back. Dice is the ethical platform that fans trust to get tickets. We get fans in, keep scalpers out and we have ambitious plans to roll out across the US in the coming months.”

Dice launched in the UK in 2014, carving out a niche with a booking fee-free model that ties tickets to mobile devices, making unauthorised resale impossible. It earlier this month announced it was introducing ‘hangover days’ for worse-for-wear staff, and in May debuted an industry first no-questions-asked refunds policy for customers no longer able to attend shows.

Sziget Festival is to roll out globally following the sale of a 70% stake in Sziget Cultural Management to Providence Equity Partners. The global asset management firm plans to launch between eight and 10 new festivals over the next few years.

Sziget’s current management retain a 30% equity stake in the company and will continue to lead management and operations of all festivals in the portfolio. Alongside Barton, Bedford and Sziget’s founder Karoly Gerendai, the team includes CEO Tamás Kádár, international operations head Gábor Takács, and Zoltán Fülöp and Norbert Lobenwein who helm Telekom VOLT Festival and Balaton Sound.

Kádár tells IQ the firm is looking to both acquire and launch new festivals. Events will range from a daily capacity of 35k – 95k, he says, with new festivals taking on the Sziget brand and acquisitions joining its portfolio. As well as the flagship Budapest event, that portfolio includes Balaton Sound, Telekom VOLT Festival, Gourmet Festival and Gyerek Sziget (Children’s Sziget).

Gerendai says: “Sziget is excited to partner with Providence as we enter our next phase of growth and development. We received a series of inquiries from both financial and trade investors in the last couple of years, but we were attracted to Providence’s proposal because it opens new dimensions for us.

“With the help of our new partners we will be able to make a giant leap forward and embark on the ambitious projects that have been in our pipeline for some time.”

“With the help of our new partners we will be able to make a giant leap forward and embark on the ambitious projects that have been in our pipeline for some time. Providence’s network and financial resources will complement our existing management team’s expertise and will put us in an even stronger position to unlock significant new growth opportunities that otherwise would not have been available to us.

“We needed a financial partner to execute on several ambitious projects that we have in our pipeline. We are excited and looking forward to building the company utilising Providence’s sector experience and financial resources.”

“The Sziget team has done an incredible job in creating some of the world’s most exciting festivals and we look forward to partnering with Karoly and team in the company’s next phase of growth to accelerate Sziget’s domestic and international growth plans.”

Barton added: “The Sziget team has done an incredible job in creating some of the world’s most exciting festivals and we look forward to partnering with Karoly and team in the company’s next phase of growth to accelerate Sziget’s domestic and international growth plans.”

Sziget was honoured twice at the European Festival Awards at Eurosonic last week, taking home the Artist’s Favourite Festival award while late Sziget booker Dan Panaitescu, who passed away after a car accident last year, was posthumously presented with the lifetime achievement accolade.

Providence is a global asset management firm with $47 billion in assets under management across complementary private equity and credit businesses. Since the firm’s inception in 1989, Providence has invested in more than 150 companies in the media, communications, education and information industries. Providence is headquartered in Providence, RI and also has offices in New York, London, Hong Kong, Singapore and New Delhi.

Istanbul-based Piu Entertainment has opened an office in London as it prepares to promote its first shows in the UK.

Piu, founded in 2010, will present a programme of concerts in Britain by “world-class” international artists over the next twelve months, beginning with Mallorcan flamenco/jazz artist Concha Buika at the Eventim Apollo (5,039-cap.) in London on 13 December.

The first wave of shows – which also include Australian pianist David Helfgott at London’s Barbican next May; Belgium’s Lara Fabian, also at the Apollo, in March; and a Chinese new year concert at the Barbican in February – will all take place in London, Birmingham and Manchester, although the promoter is already eyeing further expansion.

“We’re delighted to announce our presence in London, and we’re looking forward to presenting a wide variety of concerts by artists from all over the world to UK audiences,” comments Piu CEO Cemil Demirok, who will head up the UK operation. “Our plan is to stage concerts by artists who are huge in their own country [but] who have not yet had the opportunity of performing to audiences in the UK…

“Initially, our concerts will be in London, Birmingham and Manchester, with a view to rolling out to other towns and cities in the near future. The appetite for live music from around the world is growing all the time and, coupled with the fact that UK audiences love live music, we’re looking forward to becoming a successful fixture on the UK’s live music scene.”

Fast becoming a force to be reckoned with in the US, Pandora-owned ticketing company Ticketfly has added 12 new venues, three festivals, one promoter and one professional sports team to its portfolio.

The company says the expansion was “catalysed by the success of Memphis in May’s Beale Street Music Festival” and serves as “an illustration of the relentless momentum for the Pandora-Ticketfly platform, which is connecting venues and promoters with the largest and most engaged music audience in America”.

Ticketfly was purchased by internet radio/music streaming service Pandora last year, and says the 17 new partnerships “that bringing live and recorded music together under one roof is a winning strategy that will help venues and promoters book the right talent market their events, and build their brands”. It announced last month that Pandora will begin recommending concerts to its listeners, driving traffic to Ticketfly through “hyper-personalised” notifications to its nearly 80 million users.

“These signings are an illustration of the relentless momentum for the Pandora-Ticketfly platform, which is connecting venues and promoters with the largest and most engaged music audience in America”

“We are thrilled and honoured to welcome so many great new venues and promoters down in the south [of the US] to the Pandora-Ticketfly platform,” says Ticketfly CEO Andrew Dreskin.

“This announcement is another proof point that a sea change is happening relative to how promoters will market shows in the future.”

All 17 new clients are pictured in the graphic below: 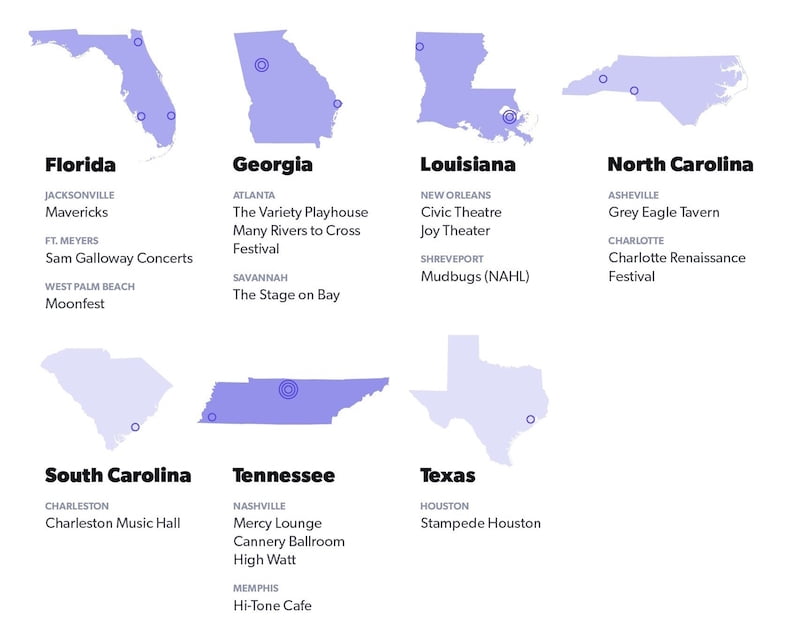 The company, a subsidiary of the world’s largest ecommerce company, Alibaba Group, blamed the larger-than-expected losses on marketing costs associated with the expansion of its Tao Piao Piao movie ticketing business, which IQ revealed in May was moving into ticket sales for concerts and live events.

However, the losses – estimated to be between US$52 and $58 million – are largely the result of an unexpected downturn in China’s film box office.

CAA Culinary will be led by Andrew Chason, a co-founder of Vector Eats, which represents a number of culinary celebrities.

“Food culture is as prominent in the zeitgeist as entertainment, fashion or sports”

“CAA is the gold standard in entertainment and sports, and I couldn’t be more excited to join the team,” said Chason (pictured). “From the surge in popularity of high-profile chefs and food-based television to the explosion of culinary festivals around the world, food culture is as prominent in the zeitgeist as entertainment, fashion or sports. As food and chefs increasingly become a fundamental part of pop culture and consumers place a higher value on experiences, rather than material goods, we see tremendous growth opportunities in this area of business.”

StubHub has launched its first Spanish-language website as it continues parent company eBay’s expansion into Mexico.

The new site, StubHub.mx, marks the first time the ticket seller has had a presence in the Latin American market and follows eBay’s launch in Mexico in 2014 and acquisition of rival Vivanuncios the following year. There are currently native StubHub sites for the US and Canada (StubHub.com), the UK (StubHub.co.uk) and Germany (StubHub.de).

The first tickets available to buy on StubHub.mx will be for the 100th Copa América football tournament, which will be held outside South America for the first time this year.

“Live events and experiences enrich our lives and give us incredible memories to share, and StubHub plans to connect fans in Mexico with one of this years most exciting sporting events, the Copa América Centenario,” says StubHub’s head of international. “Over the coming months, we will continue to build more features and add more events for StubHub.mx to bring consumers in Mexico a new, trusted way to connect with the athletes, artists and performers they want to experience.”