The UK’s live music industry is set for a dramatic post-lockdown resurgence, according to Will Page, the author of Tarzan Economics: Eight Principles of Pivoting Through Disruption. Below, the former Spotify and PRS for Music chief economist presents his groundbreaking research.

This article was first published by Music Business Worldwide and we thought it was so good, that we wanted to republish it. Our thanks to MBW publisher Tim Ingham for agreeing.

‘Ships passing each other in the night’ is how I described Britain’s live and recorded music industries in a Billboard article during the dark days of lockdown, June 2020.

Streaming had become a ‘stay at home stock’, front loading growth in subscribers and streaming volumes. By contrast, live music had been all but silenced by the restrictions put on our freedoms to curtail the pandemic.

What matters, as one Scottish Chancellor constantly told me, is ‘evidence-based policy making, not policy-based evidence making’.

I was indebted to the UK’s PRS for Music, which licences live events so that its songwriter members can collect performance royalties when their songs are played at concerts.

Its data on the British market, combined with data on recorded-music spending by the Entertainment Retailers’ Association, allowed me to model consumer spend during a time of crisis.

The exclusive insights garnered from this work are jaw-dropping. Buckle up.

Let’s go back to when the world was normal.

In 2019, British gig-goers spent GBP £1.7 billion on concert tickets (or ‘box office’), a fifth more than the £1.4 billion that consumers spent on recorded music in the same 12 months.

Then, music was silenced from our stage, but surged on our phones.

In the surreal year of 2020, ‘box office’ collapsed 90% in the UK to just £200 million – whereas spending on recorded music accelerated by 6% to breach the £1.5 billion watermark.

As lockdown eased in 2021, streaming’s success continued, pushing UK recorded music spend closer to £1.7 billion (ironically, the same value of the UK box office before the pandemic), whereas live spend recovered some of its losses capturing £700 million in box office (still less than half what it once was).

The importance of ‘wallet share’ – and how UK consumers spend just 0.2% of their money on music

We can stack both components of the British music industry on top of one another and add a final piece of the puzzle: wallet share.

The team at the Office of National Statistics who studied Covid’s impact on UK consumer spend kindly provided me with data on recreation and culture spend. This enabled me to measure total UK spend on music as a share of what is often termed ‘the entertainment dollar’.

Think about this for a wee minute: one pound in every ten spent today in Britain is on recreation and leisure – yet only two percent of that leisure spend (which pans out as just 0.2% of the grand total) is spent on live and recorded music.

Now, let’s get to our chart.

On the left, spend on recorded music in green, stacked with box office spend in grey. On the right, the red line represents the share of leisure spend.

The gin-and-tonic relationship of increasing subscriptions driving increasing gig-going increased wallet share from 2% in 2015 to 2.2% in 2019 – a bigger share of a bigger wallet.

As lockdown hit in 2020, wallets contracted and wallet share sank to 1.3% (less share of less money), recovering to 1.6% last year. 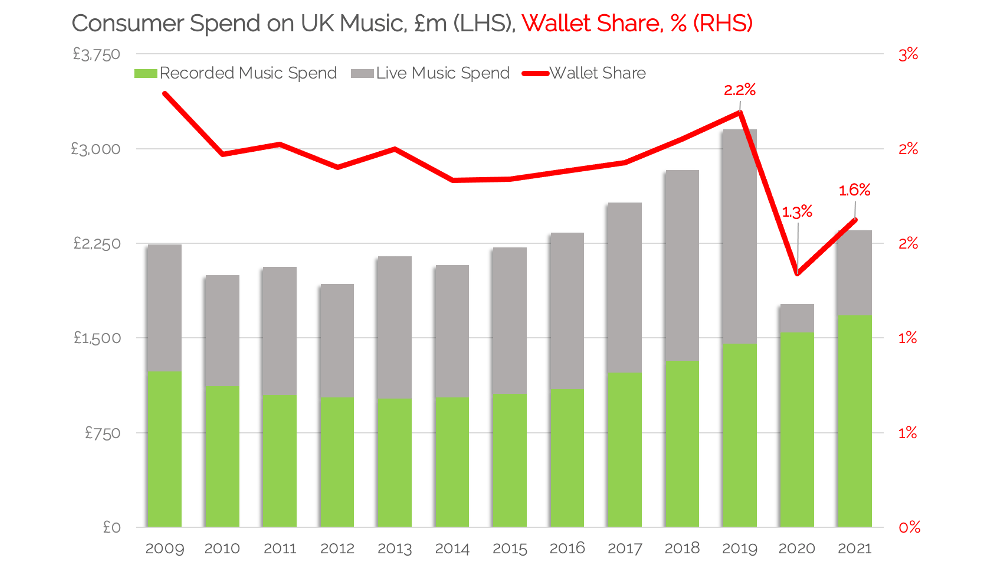 Now let’s figure out what these lofty figures mean for artists.

For live music, we strip out fees and taxes from the face value of the ticket and give the artist 75% of what’s remaining.

For recorded music we take the label’s own wholesale value of music and give the artist 25%.

As live music is the main breadwinner for most artists, its silencing in 2020 overshadowed streaming growth, wiping 70% off their income.

And in 2021, the partial recovery in live and continued growth in streaming got artist income to only half what it once was. For individual artists, (less so for firms), that’s really tough. 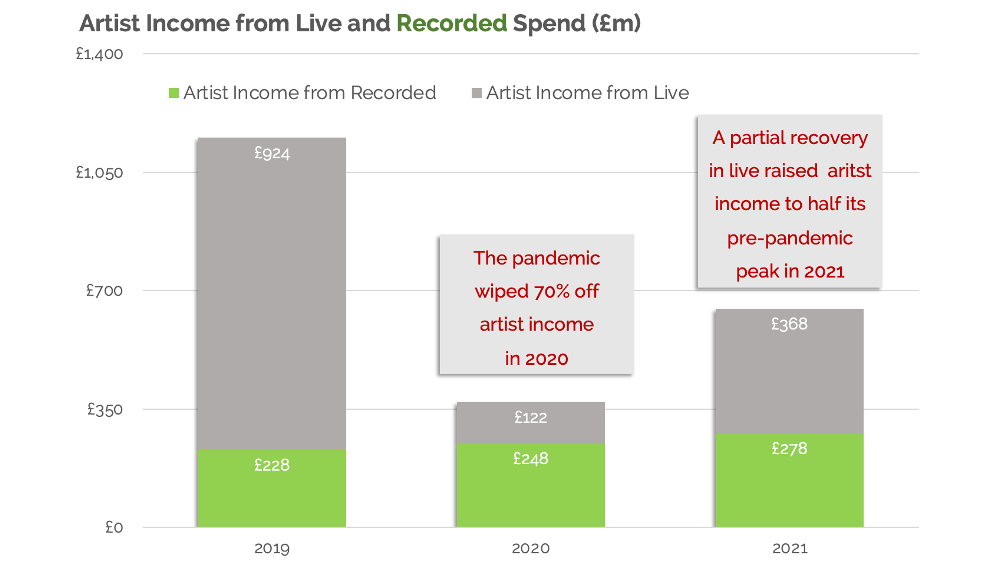 While there’s no such thing as an ‘average artist’, an average pay cut of 70% raises questions of survival.

The pandemic suddenly changed that mix.

As streaming has many more mouths to feed – and there’s nothing else to feed them with – it’s little surprise that the UK industry dragged itself through an arduous Parliamentary Inquiry during the lockdown years.

Now let’s focus on the ‘suffering and recovery’ in live music.

In a New Year essay I showed that, since the London Olympics, all the growth in UK live music was contained within stadiums and festivals – increasing their share from 23% in 2012 to 40% in 2019.

That’s at the expense of theatres, clubs and grassroots venues which have felt squeezed out of the British market, in absolute and relative terms.

The chart below neatly illustrates that the harder they come, the harder they fall: Stadiums and festivals lost more box office spend than arenas, theatres and clubs combined in 2020, reducing their share of UK box office down to a measly 10 percent.

From boom to bust to boom again, 2021 saw these outdoor events grow box office by over quarter of a billion, raising their share of box office to a record-breaking 45%.

To use ‘long tail’ language, the UK live industry has never been so ‘hit heavy’ – where the spoils go to so few events. 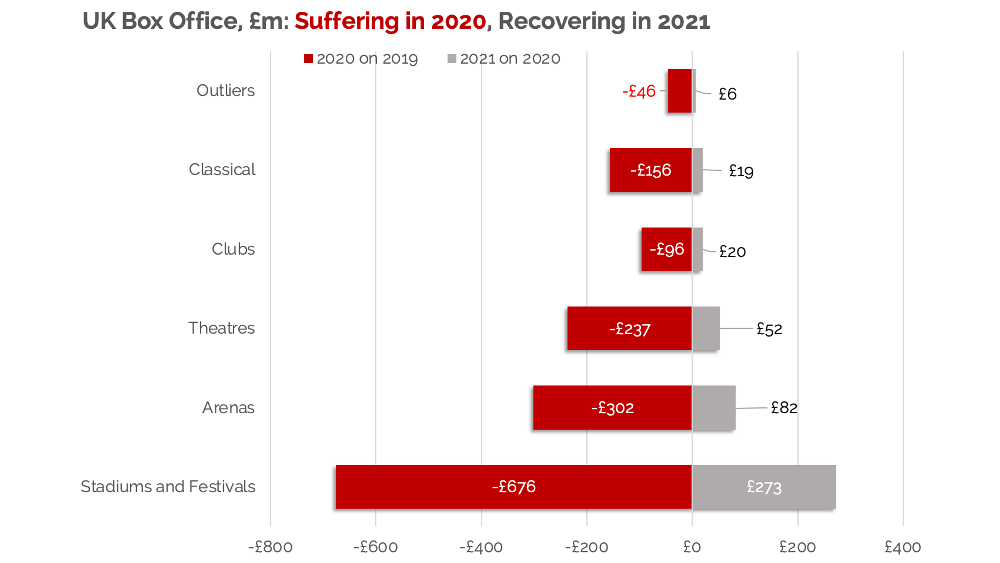 Where we go now

These insights throw up questions that a global industry can learn from.

Sure, we’re still a long way off our pre-pandemic peak of £3.2bn consumer spend and 2.2% share of wallet.

But back to Gordon Brown’s point about evidence-based policy making (and not policy-based evidence making), this work gives policymakers and industry professionals the necessary foundation to figure out what assistance and actions are required to get us back to where we once belonged.

This isn’t going to be easy.

Wallets are set to be squeezed further this year and next. That said, with the internecine nature of the Parliamentary Inquiry behind us, the imperative is for all of us – policymakers, professionals and performers – to come together to unlock the ‘coiled spring’ demand for music on British stages up and down the country.

James Taylor [not that one!] heads up music for Wembley Stadium. He sees this coiled spring(ing) into action: this summer, a record-breaking 16 concerts are taking place at the famous stadium with a staggering 1.3 million tickets sold; that’s the population of Edinburgh and Glasgow, combined!

Now the dust has settled, let’s remind ourselves that music is the alchemy in the room that brings us together. And with the pandemic finally behind us, those rooms will surely be packed to capacity.

If the collective ‘we’ get this right, it’ll be more like a slingshot than a rebound.

He would also like to share his thanks to Dice for their comprehensive data on the UK live events industry.

Will Page’s Tarzan Economics: Eight Principles of Pivoting Through Disruption is out now via Simon & Schuster (UK) and Little, Brown and Company (US).