The initiative is part of the EAA’s strategy to support current European Commission initiatives that aim to build and strengthen the music industry across the continent.

Europact, a self-funded programme, will first be launched as a pilot scheme across a limited number of arenas. The spaces will offer opportunities for undiscovered artists to make themselves known to EAA member audiences.

An EAA spokesperson tells IQ the space dedicated to Europact performances will depend on the arena: ” If the artist can carry it there may be opportunities for an opening mainstage exposure, otherwise the space may be in lobby or bar areas,” they say. “Other multi-day events may also offer a platform.”

“The European Union is dedicating large amounts of resources to the European music sector in recognition of its talent potential and creative capacity and we are delighted to be able to offer our infrastructure and know-how in order to support these efforts,” comments John Langford, who was named EAA president in October.

Olivier Toth, CEO of EAA member arena Rockhal (6,500-cap.) in Luxemburg, adds, “We have created Europact in order to contribute to building a sustainable European talent pipeline and to encourage the distribution of new music across national borders. Our aim is for the initial pilot scheme to become an established and recognised industry platform able to offer opportunities to young artists for many years to come.”

Live music was the driving force behind the success of European arenas in 2018, as explained in IQ’s recent European Arena Yearbook, produced in partnership with the EAA and the UK’s National Arena Association (NAA).

The third edition of EAY shows that boom time for Europe’s arena business is far from slowing down, with many venues surpassing the record-breaking results exhibited in EAY 2018 thanks to an increasingly diversified entertainment space and growing demand for live music events in particular.

Live music remains on top, making up 44% of all events taking place at the European arenas surveyed – up from 37% the year before. Concerts also attracted much larger audiences than other events, with an average of 8,116 fans per show, compared to a Europe-wide event average of 6,395.

A major theme of EAY 2019 is the increasing trend towards consolidation. “The merger of AEG Facilities and SMG to form ASM Global is the most significant example of this [consolidation] in the industry since Live Nation predecessor SFX Entertainment started rolling up promoters and venues in the late 90s,” writes IQ/EAY editor Gordon Masson.

Indeed, market consolidation was deemed “very concerning” for some respondents whose venues do not belong to one of the major global players.

“Evolution in the business has been astounding”

The south of Europe retains its crown as the busiest market, attracting an average of 10,869 fans per event – up from 8,555 last year and far higher than its closest competitor, central and eastern Europe (7,903). A record year for the Spanish live music business and plans for a mega new arena in Valencia reflect the region’s sense of buoyancy.

New venue developments are taking place all over Europe, in fact, with major new complexes set to break ground in Germany, Russia, Finland, the UK and Italy in coming years. Masson notes that “evolution in the business has been astounding, with each new year seemingly generating more venue construction than the year before.”

Major takeaways from EAY 2019 in numbers:

Stars of the future

In terms of future growth, the Nordics lead the way, with a predicted growth rate of >1% for 2021. The UK and Ireland are the only other region expecting growth, with a drop for all others, not least for central and eastern Europe, with predictions of a decline of almost 4%.

An overriding sense of positivity emerges from the arenas surveyed, but some concerns do creep in. Ticket prices, increasing production costs and the threat from competition are among the top worries for respondents, with the state of the economy and industry consolidation not far behind.

Although ticket prices remain at the top of industry concerns for 2018, deemed as ‘worrying’ or ‘extremely worrying’ by 22% of respondents, the average ticket price across all events fell slightly compared to the previous year (from €44.34 to €43.49). Music events, which continue to be the most expensive, also experienced a dip, from €54.88 to €53.23. 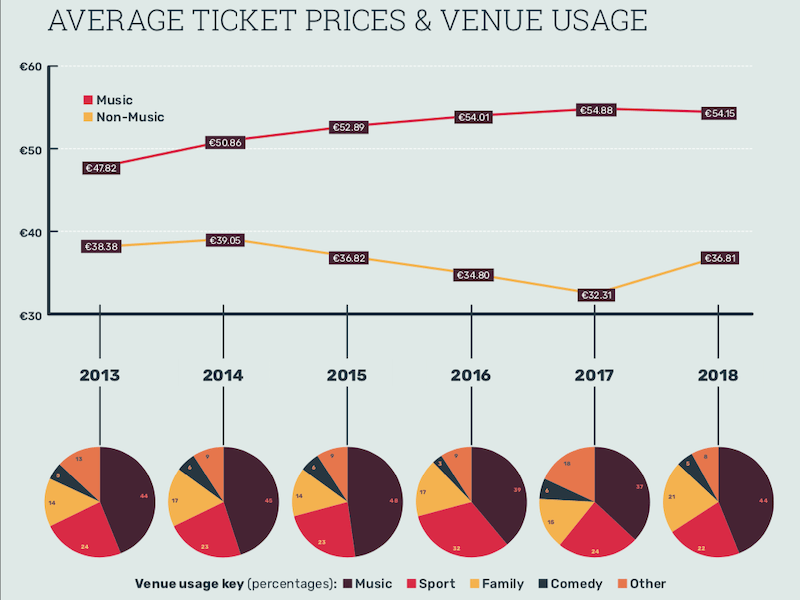