Shawn Mendes is to play a total of 99 arena shows on his world tour, after extending the North America leg with 13 additional dates.

The 23-year-old Grammy-nominated Canadian singer/songwriter is due to visit North America, Europe and the UK on his year-long jaunt, dubbed Wonder: The World Tour.

On the first leg, which kicks off on 27 June in Portland, Oregon, at the Moda Center (cap. 19,980) and runs through to August, Mendes will be joined by Dermot Kennedy.

More dates for the UK and Europe, Latin America, Asia, and Australia/New Zealand legs are to be announced shortly

The second leg of the tour, which will run from September to October, will be supported by Tate McRae.

Among the 13 additional shows are an extra date at Brooklyn’s Barclays Center (19,000), new shows in St.Louis and San Diego, as well as one in his hometown of Toronto.

The UK and European legs of the tour, which were rescheduled due to the pandemic, begins in May 2023. The UK leg is promoted by AEG Presents’ Messina Touring Group.

More dates for the UK and Europe, Latin America, Asia, and Australia/New Zealand legs are to be announced shortly.

Mendes is represented by Nick Matthews at Paradigm Talent in Europe and Matt Galle at CAA for the rest of the world. 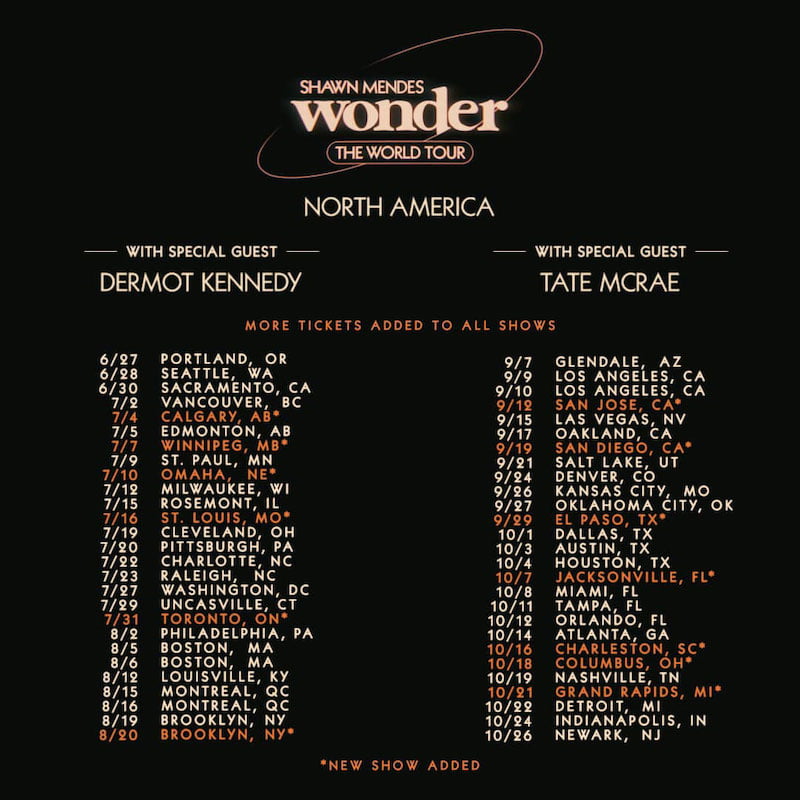