Controversial secondary ticketing platform Viagogo is to again snub a UK parliament committee, over concerns it would not be protected by parliamentary privilege and could jeopardise its legal defence against the Competition and Markets Authority (CMA).

Writing this morning to Damian Collins MP, chair of the Digital, Culture, Media and Sport (DCMS) Committee, Viagogo’s Prabhat Shah said the company was unable to obtain assurances its attendance would not “jeopardise our position with respect to the ongoing legal proceedings which the CMA has initiated against us“: 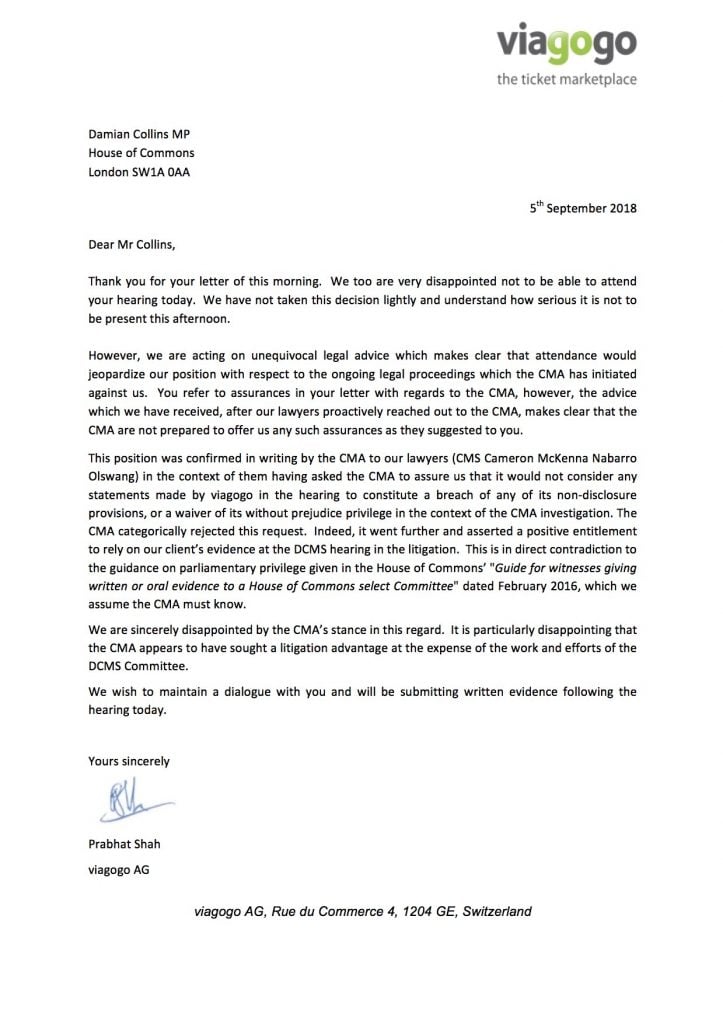 Viagogo, headquartered in Geneva, previously said it would send Cristopher Miller, its head of business development, to tomorrow’s Digital, Culture, Media and Sport (DCMS) Committee oral evidence session, part of the parliamentary committee’s ongoing inquiry into the benefits of, and threats to, live music. Viagogo controversially snubbed a previous hearing, last March, leading committee member Nigel Huddleston MP to decry its “lack of respect to parliament and, by extension, the British public”.

Also giving evidence at the session – due to kick off at 2.30pm today (5 September) – is Stuart Galbraith, CEO of promoter Kilimanjaro Live, which Viagogo declared yesterday it is suing for invaliding thousands of resold tickets for Ed Sheeran’s 2018 UK arena tour.

“It is hard not to view this eleventh-hour withdrawal cynically”

Responding to the second no-show, Collins says: “We do not accept Viagogo’s arguments for failing to appear today. Mr Miller has no valid reason not to attend and answer our questions on secondary ticketing. The session does not fall within the scope of the house’s sub judice [part of ongoing legal proceedings and therefore prohibited from discussion elsewhere] resolution, and the CMA has no objection to the session taking place. As is usual, we would take great care not to discuss issues to do with the future court case.

“Consumers deserve answers to the huge volume of concerns about secondary ticketing abuse. It is hard not to view this eleventh-hour withdrawal cynically. Viagogo’s non-attendance is a gross discourtesy, the more so given the company’s failure to attend last year.

“If Mr Miller fails to appear his place will be set out and the questions put, involving much public embarrassment and the disappointment of consumers and users who expect answers.”

The British parliament’s Digital, Culture, Media and Sport (DCMS) Committee, is to launch a fresh inquiry into the UK live music business, focusing particularly on secondary ticketing and the declining number of small music venues.

The new investigation replaces the committee’s previous inquiry into ‘ticket abuse’, which was cut short by the snap general election of June 2017, and will once again invite secondary ticketing companies – including previous prominent no-show Viagogo – to contribute evidence.

“This inquiry will be an opportunity for the committee to revisit the important issue of secondary ticket selling,” explains DCMS Committee chair Damian Collins MP (pictured). “We want to hear from the public about their direct experiences with this issue and what they think can be done to tackle it.

“We’ll also investigate what problems many small music venues face, as they struggle to keep their doors open despite the unwavering enthusiasm from the British public for live music.

“The committee also welcomes the government’s announcement [on 18 January] that the agent-of-change principle will form part of the National Planning Policy Framework for housing. As part of this new inquiry, we’ll be exploring other ways in which the government can support upcoming artists and grassroots venues that form such a crucial part of the music scene in the UK.”

“We want to hear from the public about their direct experiences”

Per DCMS, written evidence is invited in the following areas:

Evidence can be submitted via this link on the committee’s website until 17.00 on 28 February 2018.