The UK’s V Festival – which in its heyday drew crowds of 170,000 across two sites in Essex and Staffordshire – will return as a one-off digital event later this month.

V Festival 2020 will be broadcast as a three-part television special on 21, 22 and 23 August. Festival headliners are Olly Murs, Dizzee Rascal and Anne-Marie, who will perform live from the original V Festival site at Hylands Park in Chelmsford, Essex.

In addition to new performances livestreamed from Hylands Park, the ITV2 special will also feature archival footage of past V Festival performances, as well as interviews with artists about their favourite V sets and memories. More performers will be announced in the coming weeks.

Cilesta Van Doorn, executive director of brand and marketing at broadband company Virgin Media, which is behind V Festival 2020, says: “We are thrilled to announce that V Festival will be returning in 2020 with a virtual twist. Festivals are a catalyst for connecting to each other, and they’re often social events as much as they are musical.

“Although we can’t flock to the fields physically this year, we’re so excited to enable people to stay connected not only to incredible live music, but to their friends and families online too.”

The last edition of V Festival, which debuted in 1996, took place in 2017, after which it was replaced by a new event in Chelmsford, Rize Festival. Rize did not return in 2019 following a disappointing first year.

“V Festival holds a very special place in my heart […] as not only did I used to go every year with my mates and camp as a punter, but I later got the chance to actually perform there and be invited back four times,” says Olly Murs. “Headlining the MTV stage in 2015 was definitely a career highlight of mine, as was jumping on stage with Madness to sing one of my favourite tracks of all time, ‘It Must Be Love.’ I’ve had some pretty special memories at V, so to come and sing at Hylands Park [again] was an easy ‘yes’.

“It’s great that ITV2 and Virgin Media are bringing V Festival into people’s living rooms, and I’m very glad to be a small part of that.”

Paul Mortimer, head of ITV’s digital channels, adds: “V Festival is a huge part of the UK’s festival history and the ITV2 team are so pleased to be able to play a part in bringing it back to the masses for one year only.

“The star-studded line-up music fans have come to expect from V Festival will be bigger than ever. We’re dipping into the archives to showcase some throwback performances, too, so people can reminisce on some of their favourites memories from past years.”

Festival Republic has decided to cancel this year’s Rize festival following a disappointing first year of the event for local authorities. Plans for a replacement event in 2020 are now underway.

The inaugural Rize festival took place in Hylands Park, Chelmsford last year as a replacement for the southern leg of V Festival (90,000-cap.). The event did not prove as successful as organisers had hoped and Chelmsford City Council reported a large loss in expected revenue.

Roy Whitehead, leader of Chelmsford City Council, told Essex Live: “V turned into Rize which wasn’t widely successful last year. It is a loss of considerable income. It is roughly £500,000 a year which we have to find.”

It is believed that event organiser Festival Republic planned to alter the scale of the event to host a more successful Rize 2019. However, such alterations would have resulted in an estimated loss of £470,000 from the council’s annual budget.

The event organiser is now working with the Council to create a new successor festival for 2020.

“The council has been made aware that Festival Republic is not proceeding with Rize in 2019,” a spokesperson for Chelmsford City Council told IQ.

“However, the Council and Festival Republic are currently finalising a long-term agreement for an exciting new successor festival to V and Rize to commence in 2020 and details of this will become available when contracts are in place.”

The festival replaced the Chelmsford leg of V Festival. The last edition of V Festival took place in 2017 when Richard Branson’s Virgin Group pulled sponsorship to end a 22 year commercial relationship with the festival. 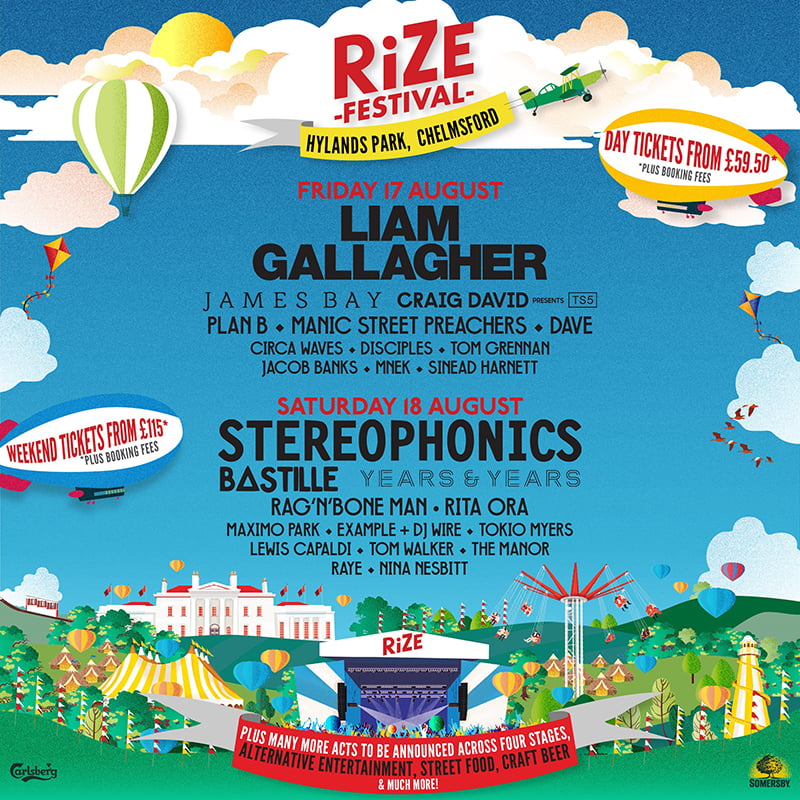