CAA London agent Ben Kouijzer has thanked the international live music industry for its “incredible love, support and generosity”, following a groundswell of support for his fundraising campaign to pay for cancer treatment.

Kouijzer, 36, turned to crowdfunding site GoFundMe after being diagnosed with malignant peripheral nerve sheath tumour (MPNST) – a rare and aggressive form of cancer of the connective tissue surrounding nerves, which in Kouijzer’s case later metastasised to his lungs.

After being told by doctors that the lung cancer would eventually kill him, Kouijzer “immediately began an ongoing process of researching every possible thing that I could do (conventional and integrative) to change the course of history I found myself on,” he explains, “discussing different treatments, arranging tests, ordering supplements, radically changing diet, speaking to therapists, embracing meditation and breathwork, taking in as much information as we could and trying to make sense of it all.”

MPNST is non-chemosensitive, meaning it doesn’t respond to chemotherapy. Doctors in the UK’s National Health Service (NHS) suggested operating on one lung at a time to remove as much of the cancer as they can, and then follow up with chemotherapy to “manage the disease”, Kouijzer continues.

“We are embracing surgery with open arms, and feel fortunate to have an amazing surgeon within the NHS, but bog-standard chemo that isn’t likely to work just doesn’t feel good enough for a long term outcome.”

“We are more hopeful than that,” he adds, explaining that “there are other forms of treatment, targeted therapies and immunotherapies that can in some cases have better outcomes that we want to explore after surgery. Eligibility for these depends on certain genetic mutations which need to be tested for using expensive molecular testing and DNA sequencing – something that is not available as standard through the NHS. If I have certain genetic mutations, I might be eligible for some of these more promising treatments, and maybe even beat this thing!

“If I have certain genetic mutations, I might be eligible for some of these more promising treatments, and maybe even beat this thing”

“While I’m not turning my back on the NHS, who have been in so many ways amazing up until this point, we need to form the right team of people, do the necessary testing and create an individualised treatment plan for me, no matter what or where in the world this takes place.

“I just don’t have the financial resources to do all of this alone.”

Kouijzer, who is currently in hospital recovering from the first of the lung surgeries, says he has been “blown away” by the support for the fundraiser – which includes donations from friends, wellwishers and colleagues in the concert business – which smashed through its £50,000 target within a matter of hours on Friday 8 April.

At press time, the GoFundMe stood at over £117,000 – every penny of which will be put towards “treatments further down the road”, says Kouijzer, whose CAA roster includes electronic music acts 808 State, Meduza, Tough Love and Bearcubs.

“Thank you so much, everybody – I can’t tell you how this makes me feel,” he adds. “It’s been a lonely week in hospital but the support I’m feeling today is just unreal.”

Ticketmaster will offer fans the opportunity to add a charitable donation on tickets bought through its websites, as well as dedicate all its employee fundraising activities – “from bake sales and bucket collections through to fun runs and quiz nights” – to support cancer charities around the world.

Mark Yovich, president of Ticketmaster International, says: “I am very proud to announce our partnership with Cancer Research UK. Cancer is something that is likely to have touched us all at some stage, our family, friends and even colleagues. By uniting our markets together from across the globe, we can amplify our efforts on an international scale and make a greater contribution to the fight against cancer. Our teams have great affinity with this cause, and I have high hopes for what we can raise together for Cancer Research UK this year, and beyond.”

“Around the world, Ticketmaster employees will be raising money to support their local cancer charities,” adds Caro Evans, director of Partnerships at Cancer Research UK. “Cancer Research UK is the UK partner and the money raised here will help fund our lifesaving research.

“By uniting our markets together from across the globe, we can amplify our efforts on an international scale”

“Today, on World Cancer Day, it’s exciting to be part of this international fundraising effort. Cancer is a global issue, so it’s vital that we work together to beat this disease.”

As part of its World Cancer Day activities, every Ticketmaster International employee has today received a Cancer Research UK ‘unity band’ to mark the day, while in London, Ticketmaster UK staff have taken to the streets with collection buckets, as well as volunteering in local Cancer Research UK shops. and taking part in a variety of cancer education and awareness programmes.

Last November, Ticketmaster UK held a white-collar boxing event in aid of Cancer Research UK at the Troxy in east London. A team of employees underwent eight weeks of boxing training in the lead up to the fight, which raised £48,983 for the charity – in addition to upsells on the UK site, which have raised a total of £350,000.

‘Masquerave’ for male cancer at the Troxy

Troxy in east London will this month host an evening of live dance music aimed at raising awareness of male cancer.

The black-tie Masquerave, organised by cancer charity One for the Boys and carmaker Fiat, will feature DJ sets by Faithless, Eats Everything, Tom Findlay of Groove Armada, Jamie xx, Jillionaire, Seth Troxler, Catchment, Patrick Topping and yet-to-be-announced surprise guest, while in attendance will be “DJs, dance legends and celebrities getting together to show their support, inviting the public to raise money for the fight against male cancer”.

The independently owned Troxy (pictured), an art-deco former cinema opened in 1933, is a multi-purpose music and events venue with a capacity of 3,100 for live music.

Here’s the line-up as it stands: 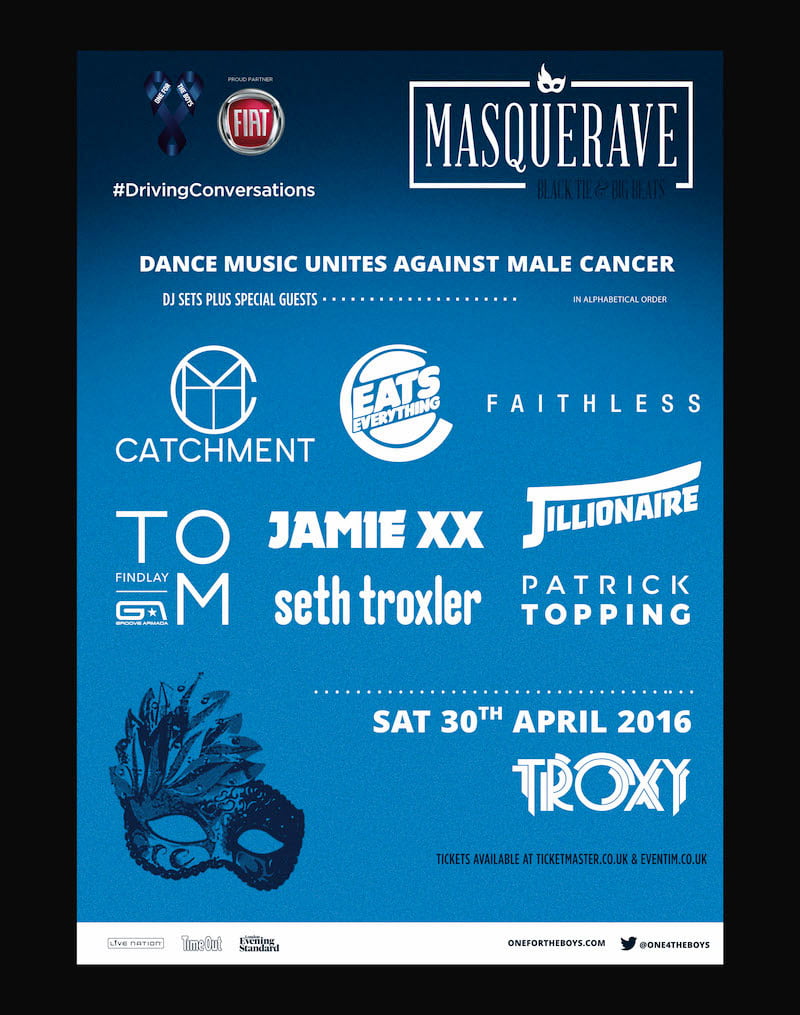