K-pop fans can now buy shares in the companies behind stars like BTS and Blackpink via a new Exchange Traded Fund (ETF), launched in the US.

An ETF — which can be bought and sold on-demand like individual stocks — allows US investors to buy foreign stocks on a domestic stock exchange.

In South Korea, K-pop fans and other retail investors could easily own shares of K-pop companies because they trade on South Korea exchanges but until now it was “almost impossible” for US fans to buy the individual stocks.

Jangwon Lee, the CEO of CT Investments and Contents Technologies, the company behind the ETF, says: “K-pop, which has become a global keyword, has become part of mainstream culture for fans in Korea as well as around the world.

“We are launching this ETF to provide an opportunity for global fans who love K-pop to participate in the potential growth and development of the K-pop industry as well as investors access to Korea-listed companies that are driving the future of global content industry forward.”

Lee is also CEO of Seoul-based Beyond Music which is reportedly Asia’s largest single music IP asset management company and has raised $200 million to buy up rights in Asia.

The South Korea-based entertainment giant has had huge success in the live music sphere, with record-breaking concerts from K-pop superstars BTS.

Most recently, BTS broke the global event cinema record after grossing $32.6 million (€29.8m) with the first live worldwide cinema broadcast of a concert from South Korea.

After their song ‘Ddu-Du Ddu-Du’ earlier this week become the first by K-pop act to surpass a billion views, girl group Blackpink are officially the hottest Korean pop export, outranking even BTS when it comes to online buzz, according to Viberate.

According to the platform, “it’s a close call, but the answer is Blackpink. Blackpink tops BTS in Viberate’s overall rankings, as well as their mainstream pop and Asianpop rankings, which are calculated according to digital popularity on Twitter, Instagram, Spotify, SoundCloud, and YouTube.”

Not surprisingly, it continues, “YouTube is where Blackpink especially dominates, with 4.5 billion yearly views and of course the recent ‘Ddu-Du Ddu-Du’ benchmark. BTS only surpasses Blackpink in Twitter followers and SoundCloud popularity (where Blackpink has no presence).”

Courtesy of Viberate, here’s how the K-pop titans stack up: 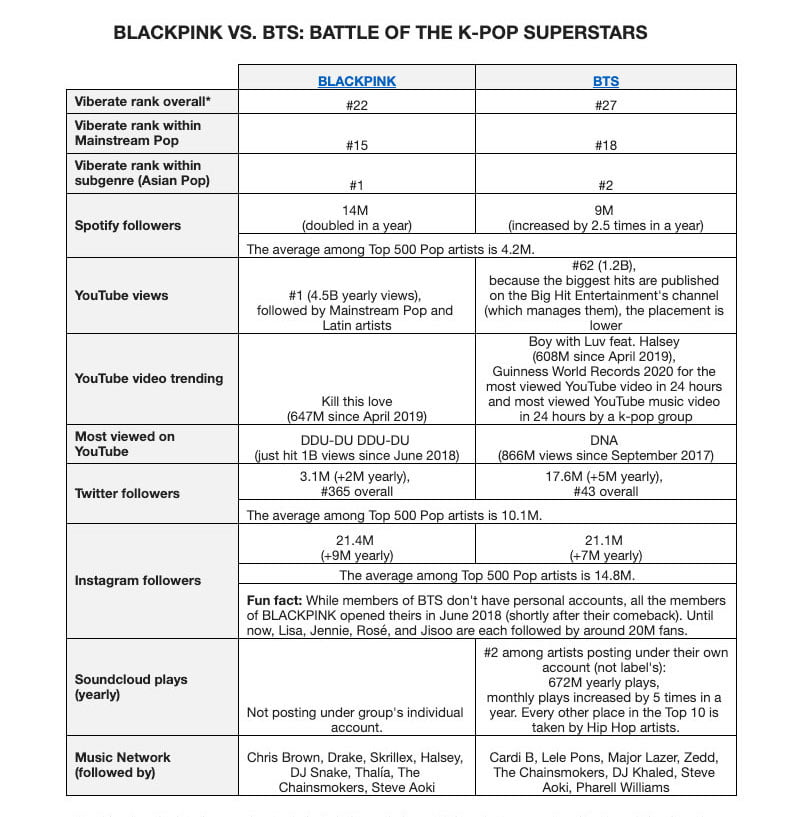 Viberate, one of the first wave of music-focused cryptocurrencies, started out as an Airbnb-like service which promised to cut out the agency middle man and connect unsigned musicians (who would be paid in Viberate’s native crypto, the vibe) with a database of those who might want to book them.

Two years on, its creators are focused on building blockchain-powered database that maps the entire live music business, including artists, music venues, booking agencies, festivals and other music events. Dubbed the ‘IMDb of music’, Viberate allows artists, music professionals and fans to add artist/agent/venue/festival profiles to its database; following review by a team of around 80 ‘curators’, the submitters are rewarded with cryptocurrency.

Following news that its biggest stars would go on a touring hiatus, BTS’s management company, Big Hit Entertainment, recently announced plans to hold global auditions for a new girl band, to rival the likes of Blackpink and Twice.

All 15 concert dates on the Japanese leg of K-pop band Twice’s current world tour have sold out, after over one million fans applied for tickets.

JYP Entertainment, the management company behind the band, announced two extra dates on Sunday (27 October) at the 55,000-capacity Tokyo Dome.  Twice will be the first K-pop girl group to play two consecutive concerts at the dome. The shows will take place on 3 and 4 march 2020.

The concerts are part of the Twicelights 2019 world tour, which has seen the band play in Korea, Thailand, the Philippines, Singapore, Mexico, Malaysia and the United States.

According to IQ’s recent Japanese market report, Japan is the second largest music market in the world, behind the United States and ahead of Germany. The country’s live sector has reached unprecedented levels in recent years, generating ¥332 billion in 2017 (£2.4bn) and ¥345bn (£2.5bn) in 2018.

K-pop in particular has “made a big impression” in Japan, with Twice and other bands such as BTS and Blackpink recording and performing Japanese versions of their songs.

Amid the growing popularity of K-pop and other Korean music globally, concert promoters in China are reportedly pressuring authorities to lift restrictions on South Korean artists performing in the country.

The People’s Republic of China issued a nationwide ban on performances by Korean artists – as well as a prohibition on South Korean television programmes, and on Korean celebrities appearing on Chinese TV – in November 2016, during a diplomatic row over the presence of US missiles in South Korea.

No major Korean artist has played in China, a market of some 1.4bn people, since – even as the likes of Exo, Twice, Blackpink and, most famously, BTS (who yesterday announced a new world stadium tour), have gone on to huge touring success elsewhere.

According to Bloomberg, “people familiar with the matter” have revealed that China-based promoters are now seeking permission to bring in Korean bands, though it is not clear whether the Chinese culture ministry will be receptive to their requests for permits.

“People are getting ready”

“People are getting ready,” says Archie Hamilton, MD of promoter Split Works. “There is a lot of money there.”

“A lot of Korean artists would like to tour” in China, adds Modern Sky booker Jordan Corso. “It’s too big a market [not to].”

The news comes amid a limited thaw in relations between the two nations that has seen a select number of groups being allowed to tour and South Korean programming returning to Chinese TV.

Live Nation has acquired a controlling interest in Singaporean promoter One Production.

The companies have a history of co-promotion – notably recently partnering on this month’s sold-out BTS show at Singapore’s National Stadium (55,000-cap.) – while Live Nation Singapore brought major international acts including the Weeknd, Dua Lipa, Harry Styles and Bruno Mars to the city-state in 2018.

One Production managing director Ngiam Kwang Hwa comments: “We already know the Live Nation team very well and are excited by all the opportunities this new venture generates for our team and our artists.”

The deal follows the most acquisition-heavy 12 months to date for Live Nation, which closed 2018 by taking over Argentina’s DF Entertainment. Terms of the One Production acquisition were not disclosed.

“We are creating the leading international concert promotion business in Singapore”

“By joining forces with One Production, we are creating the leading international concert promotion business in Singapore,” says the chairman of Live Nation Asia-Pacific, Alan Ridgeway.

Other major promoters in Singapore include Midas Promotions and LAMC Productions, which focus on international acts, and MM2’s Unusual, which mostly promotes Asian artists.

“We look forward to amplifying performance opportunities for artists, and diversifying concert offerings for fans, by welcoming the local expertise of the One Production team,” concludes Ridgeway.

One Production’s first show as part of Live Nation will be Korean girl band Blackpink, who play Singapore Indoor Stadium (12,000-cap.) on 15 February.