Friends and colleagues have paid tribute to Jaime Sarrantonio, account manager at app developer Aloompa and a respected figure in Nashville’s independent music scene, after she lost her life in an apparent robbery in the early hours of Friday morning.

Sarrantonio, 30, was outside the Cobra Nashville bar, on Gallatin Avenue in east Nashville, Tennessee, at around 3.30 on 17 August when she and three friends were set upon by two men, police say. Sarrantonio and 33-year-old Bartley Teal, a local musician, were shot and killed after Teal told the robbers he had nothing to give them.

A manhunt is underway for the perpetrators, described by police spokesman Don Aaron as “cold-blooded killers”, who are believed to be behind a string of recent shootings in the area, Reuters reports.

Sarrantonio (pictured) had been at Nashville-based Aloompa since August 2016, working with festival clients including Superfly (Outside Lands, Clusterfest), Rock in Rio, Ultra Europe and country music event CMA Fest. She was also festival manager at RedGorilla Music Fest, an independent music festival in Austin, Texas, and executive assistant at Tinderbox Music, a music promotions and distributions company representing unsigned artists.

Jon Belanger, CEO of Tinderbox Music, says Sarrantonio “worked harder than everyone else.” “She was very smart,” he tells the Tennessean. “She chose to work in independent music and champion it for the last ten years.”

In a statement provided to IQ, Aloompa says its staff are “heartbroken over the loss of our dear friend and team member. Jaime Sarrantonio was loved by everyone at Aloompa and by the many clients she worked with on our behalf over the years.

“She had a tremendously positive impact on everyone she spent time with. Our thoughts and deepest sympathies go out to her family and friends at this time. We will all miss Jaime and her compassionate and joyful presence.”

Stefany Reed, a former colleague of Sarrantonio’s at Aloompa, describes her late co-worker as “the person that you always want in the room, the friend that is down for anything, and is just a beacon of light”. “The world lost one of the best” on Friday morning, she adds. “Love you always, Jaime. You will be so, so missed.”

A statement from the Cobra says that “no words can convey our sadness and shock at this time”, adding it plans to organise special shows in the near future to “celebrate the lives” of both Sarrantonio and Teal.

At press time, a GoFundMe page had raised nearly US$3,000 towards a memorial service for Sarrantonio, “put on by friends, here in Nashville. Hug your loved ones.”

The arrival of the iPhone in 2007 catapulted the mobile app into the mainstream, as it was no longer a limited tool sitting on a niche operating system. The subsequent rise of the Android platform accelerated things to the point where over two million different apps are now available – most of them free – covering everything from news and weather to games and face-swapping.

The live industry has seen a significant part of that growth, with most festivals and venues now having their own apps that help connect and engage audiences in ever-more unique ways. IQ spoke to some of the leading companies in the space about their tech and how this dynamic industry will evolve next – click below to read the full feature in the digital edition of IQ 67… 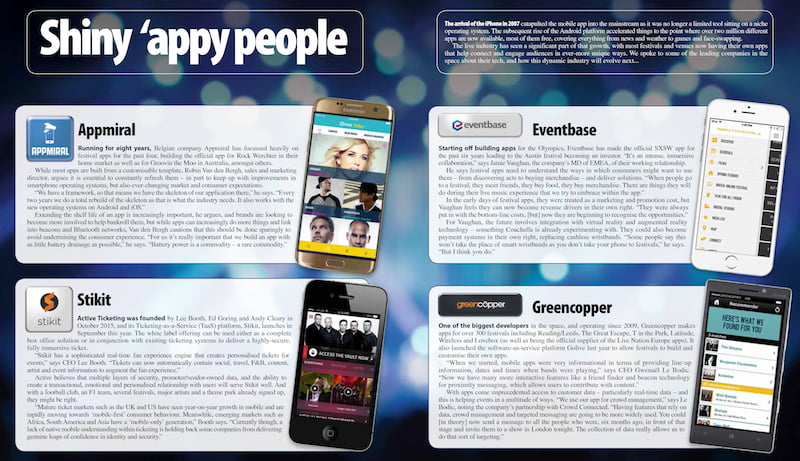 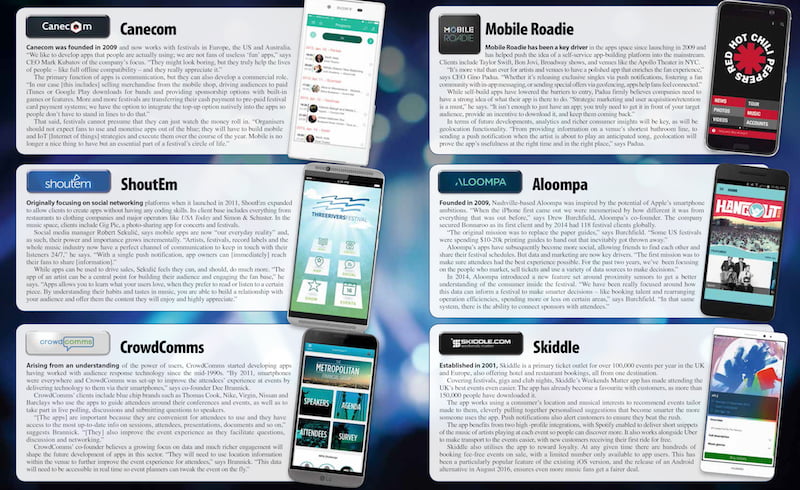 Read the rest of this feature in issue 67 of IQ Magazine.

Bonnaroo 2016-goers can relive their festival experience through the Bonnaroo mobile app thanks to new technology debuted by the application’s developer, Aloompa.

Using 300 on-site bluetooth beacons – the same set-up that allowed the company to analyse the most in-demand US festival performers of 2015 – Aloompa tracked attendees’ behaviour at Tennessee festival, including the bands they saw, and then used the data to create a unique playlist, or ‘Livestory’, accessible from the festival app. This Livestory (Bonnaroo’s is named My Setlist for Bonnaroo) features “curated artist imagery and music” and can be streamed and shared with friends.

Aloompa says Livestories are “an engagement-rich opportunity for brands to connect with attendees on a deeper level” and that a “popular Diageo vodka brand” – it’s Smirnoff Ice – “took advantage of Livestory at this year’s festival”.

Bonnaroo’s Jeff Cuellar says: “We’re continually working to enhance the attendee experience and create fan first integrations not found at any other festival. Leveraging Aloompa’s innovative platform, we’ve developed a unique way for fans to compile their Bonnaroo music memories in one place. This also allows us to learn more about our audience so that we can improve the festival experience year over year.”

Bonnaroo 2016 was the least-attended in the festival’s history, with ticket sales down 28,156 on last year and 46% from an all-time high of 85,094 in 2011, although promoter Live Nation remains bullish about its prospects, describing it as “vibrant as ever”.