The venues services company opened the Lounge last week at the 11,000-cap Liverpool arena, coinciding with a show by Kaiser Chiefs 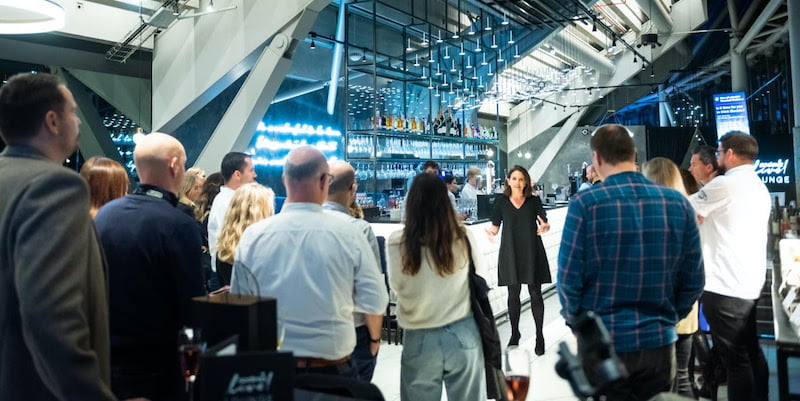 Senior business leaders and media came together to celebrate the official opening last week, coinciding with a headline show at the 11,000-cap venue by Kaiser Chiefs.

Hospitality and live events specialist Sodexo Live!, which has partnered with the ACC Liverpool team since 2008, appointed former The O2 and Alexandra Palace boss Rebecca Kane Burton as its UK and Ireland CEO earlier this year.

“Our partnership with ACC Liverpool has grown ever stronger over the past 14 years, and we are delighted to be able to celebrate this so visibly with the launch of the Sodexo Live! Lounge,” says Kane Burton. We are looking forward to the future with fantastic times ahead with the Eurovision Song Contest in 2023 and a host of exciting artists coming to the venue.

“Our mission is to use the Lounge to make the incredible events at the arena even more special for our guests, giving them an experience that they will remember for the rest of their lives. The launch of the Sodexo Live! Lounge is just one of the many exciting initiatives we have planned, which plays into our strategy of engaging differently in the live marketplace.”

“We have no doubt that the partnership between ACC Liverpool and Sodexo Live! will continue to be a great success”

The Sodexo Live! Lounge has a maximum capacity of up to 110 guests and offers a menu curated for each event, along with a selection of premium drinks and before and after arena performances, with up-and-coming local music artists making guest appearances.

“It’s been great to officially launch the Lounge and showcase what it offers guests,” adds Ben Williams, commercial director of M&S Bank Arena parent company The ACC Liverpool Group. “We have no doubt that the partnership between ACC Liverpool and Sodexo Live! will continue to be a great success and will make use of both our combined expertise as the region’s leading arena and Sodexo Live’s world-class hospitality offer.”

It was recently confirmed that the M&S Bank Arena will host the 67th Eurovision Song Contest on behalf of Ukraine on Saturday 13 May 2023, as well as the semi-finals on 9 & 11 May. Other upcoming concerts at the venue include Rod Stewart, Westlife, Paolo Nutini, N-Dubz, Lewis Capaldi and Jamie Webster.