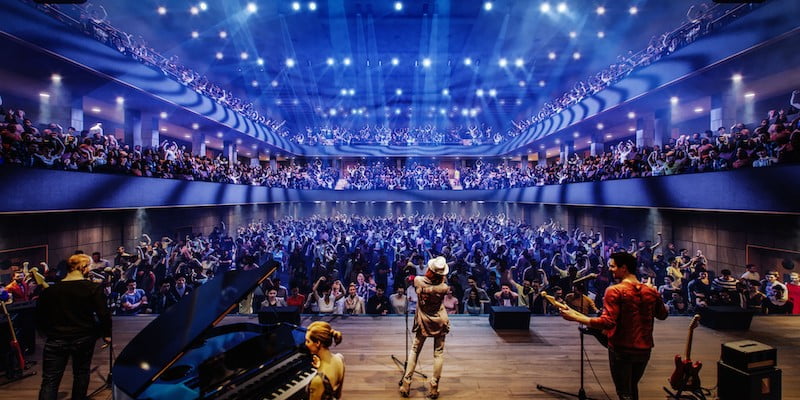 A CGI of the revamped Civic Hall

AEG Presents UK chief Steve Homer has spoken to IQ about opportunities offered by the mid-size venue market after the company confirmed the long-awaited reopening date of The Halls Wolverhampton.

The historic Halls hosted artists such as David Bowie, The Clash prior to closing in 2015 for its multi-million pound refurbishment.

“We’re in a position where the diary is officially opening next week for promoters and agents,” says Homer. “We’re planning on doing a series of launch shows within the first 10 days to two weeks of it opening just to get people reacquainted with the venue.”

The council are due to hand over the keys to AEG on 21 November, with test events set to be held next spring ahead of the official reopening.

“It costs £1 billion to build an arena from scratch now, so it’s a safer business model because it’s not relying on enormous investment to get off the ground”

AEG, which agreed a 25-year deal with the City of Wolverhampton Council to run the venues back in 2019, will also operate the 4,400-cap live music space within London’s £1.3 billion Olympia scheme, which is on track to open in 2024. The firm’s mid-size portfolio also includes the 5,000-cap Eventim Apollo and 2,800-cap Indigo at The O2, both in London.

“Like buses, they come in batches,” jokes Wolverhampton native Homer, who notes similar AEG developments in Denver and Nashville.

ILMC’s New Builds: The venue boom panel previously explored the potential for a boom in the mid-sized sector, and Homer spells out the financial benefits.

“That 3,500 to 4,500 capacity seems to be the sweet spot and it’s definitely something that we’re seeing across the globe,” he says. “It costs £1 billion to build an arena from scratch now, so it’s a safer business model because it’s not relying on enormous investment to get off the ground.”

Homer has overseen a revamp of AEG’s UK operations since taking sole charge of the company’s UK office at the start of the year following the departure of former co-CEO Toby Leighton-Pope, who has since resurfaced as MD of the newly formed TEG Europe.

“It was like losing my right arm, and so there was a bit of adjustment that came with that,” reflects Homer. “But once I got over the initial shock of it, I knuckled down and decided it was something I wanted to do. I decided that if it was just going to be me, I needed to structure it in a slightly different way because when Toby was there there were various lines of responsibility that fed down from both of us. So I did some restructuring within the teams.

“I embellished our venues division and split the touring division into three specific sections – one of them was pure touring, everything from clubs to stadia, and then working with the junior promoters and assigning them tours to work on that they wouldn’t necessarily be familiar with, with support from the greater team. So it was a good opportunity for those promoters to work with bigger artists or venues than they’d probably have been familiar with up to that point in their career.”

He continues: “And then I created a new events division for a number of our standalone projects that don’t really fit into touring – our 50/50 ownership of the Eden Sessions, Country to Country and Just for Laughs, the comedy festival we’re partnering on. We put our summer series of shows into that as well – the likes of Michael Buble, Tears for Fears, Bryan Adams and Ball & Boe, so that’s certainly helped me focus the business.”

Revisit part one of our interview with Homer here.