Billed as the largest outdoor music venue in Europe, the RCF Arena in Reggio Emilia will host Harry Styles next summer 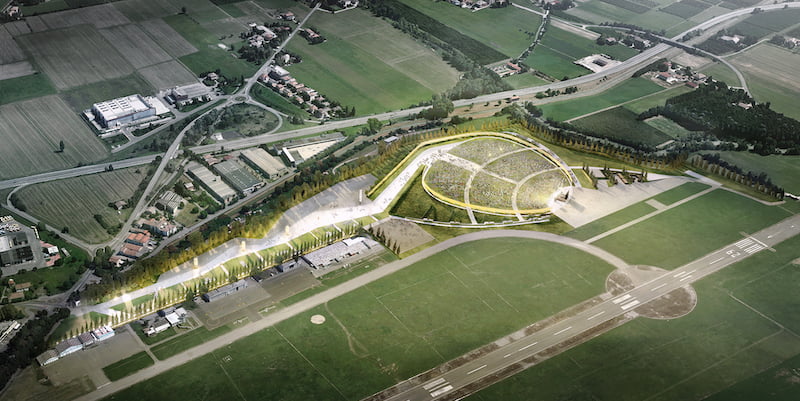 The largest outdoor music venue in Europe is now up and running in Italy after its opening was delayed due to the pandemic.

Construction work on the 100,000-cap RCF Arena in Reggio Emilia, near Bologna, started in 2018 and the venue was originally set to open its doors in September 2020 with a 30th anniversary show by local superstar Luciano Ligabue.

Following two postponements caused by Covid-19, Ligabue finally christened the arena this June, almost two years later than originally planned, with Harry Styles booked to play  on 22 July next year as part of his Love On Tour European run.

Designed by Iotti + Pavarani Architects, Tassoni & Partners and Studio LSA, the venue is operated by the SPV C.Volo network of seven enterprises and was built on unused land at the Reggio Emilia Airport, with audio company RCF acquiring the naming rights. The project has echoes of Tempelhof Airport in Berlin, Germany, which has served as a public park and outdoor concert venue since closing in the 2000s.

“RCF Arena’s aim is to make Reggio Emilia the capital of live music, and to create a Music Valley of international scope”

The RCF Arena, which “features a slope of 5% to guarantee the best possible views and acoustics”, is being managed by C.Volo partner Arena Campovolo S.r.l., formed by Ligabue’s manager Claudio Maioli and Ferdinando Salzano, director of CTS Eventim-owned Friends & Partners.

“RCF Arena Reggio Emilia aims to make the most of the potential for growth in the live events sector to boost tourism in the region,” says a press release. RCF Arena’s aim is to make Reggio Emilia the capital of live music, and to create a Music Valley of international scope – deservedly joining the system of valleys in the region dedicated to motor vehicles, food and wellness – able to welcome, thrill and amaze people from all over Europe.”