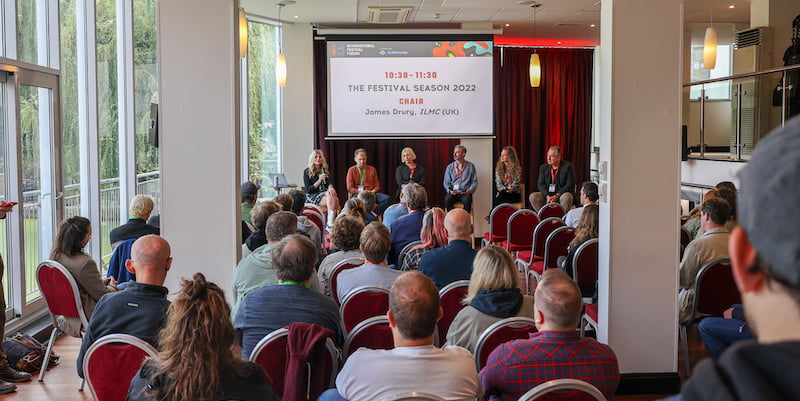 A handful of top festival executives reflected on a tough summer and highlighted the key challenges ahead in the opening panel of the 2022 International Festival Forum (IFF).

A record 800 delegates from 45 countries have flocked to the eighth edition of the invitation-only event for festival professionals and booking agents, which kicked off last night (27 September).

Kornett detailed a number of the now-familiar issues experienced by events across the board coming out of the pandemic.

“We’ve been all been hit with price increases, with logistical problems, with lack of security, lack of stagehands, lack of riggers, lack of material,” said Kornett. “But I found this year particularly challenging, hearing and experiencing all the stories of our long term suppliers being in the dark.

“For some of the festivals, the price increases and whatsoever could not be captured because we’d already sold the tickets [in 2020]. So our results have not been as we wanted them to be, but generally we felt lucky because we could stage our events. We were not hit by weather, we didn’t have to shut down because we couldn’t get security. Our long term suppliers across the group worked with us. So we somehow got there but how, at times, you can only talk about at night when nobody’s listening.”

“We sold 15% of our tickets in the last two weeks, which showed the audience was also traumatised by what happened”

Konietzko explained how Bluesfest managed to ultimately triumph over adversity.

“Our season started with the cancellation of the 2021 event, which was one day before the event,” she lamented. “We were faced with the biggest challenge for our company, which is 33 years old. So we had to go into the politics and convince government to bail us out and to help us, which they did because they were the ones who shut us down because of one case of Covid in the area. So it was very political this year.

“Our challenges were to not only find finances for the year ahead, but to also pay out every supplier and staff member who was already working on the 2021 event. And we succeeded – not only did the government help with the payment of the 2021 event, we were able to get some grants and funding for the future event.”

A further complication arose when the Byron Bay festival site was hit by flash floods in the weeks leading up to the 2022 festival in April, headlined by Crowded House and Midnight Oil.

“Our crew had been through so much already for two years and the wish to return was bigger than anything else,” added Konietzko. “So I don’t know how we did it, but we managed and we opened. We sold 15% of our tickets in the last two weeks, which showed the audience was also traumatised by what happened.”

Kozlowska recalled her unfortunate timing of starting with Live Nation Sweden in March 2020.

“I started booking a festival and that cancelled very shortly afterwards, followed by the next one. So my first festival summer in Sweden was very interesting,” she said. “There were some challenges but, overall, Lollapalooza went amazingly: we had over 70,000 unique visitors – an increase of 20% from 2019.”

The promoter said there had been a huge increase in VIP and platinum ticket sales, which could theoretically help subsidise cheaper tickets in the future.

“Some people are very willing to buy the more expensive ticket to get that extra comfortable experience,” said Kozlowska. “So you might not need to raise all your ticket prices – at least not by 20% – if you can make better experiences for the VIP or platinum guests and then by that, you can also get the young kids to actually be able to afford a ticket.”

Primary Talent’s Dunstone, who works with acts such as Jack Harlow and Rina Sawayama, was also able to put a positive slant on the season.

“It’s been a great summer for my clients,” she said. “Everybody’s been out touring. A lot of my clients blew up during lockdown so it’s the first time they’ve been able to actually play festivals, so from that perspective, it’s been really positive. But there have been a lot of challenges, especially with the state of the airports within Europe: lost luggage, cancelled flights, people missing connections. That’s definitely been a lot of my problem-solving over the summer. But the shows all happened.

“There are going to be a lot of challenges next year, especially with price rises across the board. People have to be more careful with how they spend their money. When buying a festival ticket, you have to buy everything around it – transport, accommodation, so it can become like a holiday really. So people are going to have to choose whether they want to go on vacation or whether they want to do a festival as a holiday.”

Kornett brought up the findings of a survey which suggested that up to half of German festival-goers in Germany were put off returning to festivals due to Covid-19.

“In the UK, obviously, Covid is kind of over and one’s stopped worrying for now about that,” he said. “On the continent, it’s slightly different, and in Germany in particular. In Germany, there was a survey that was quite interesting because, across all festival goers, 50% were concerned about Covid when going to a festival, and thought that would possibly keep them from going. That’s a large number.

“The other question is even more interesting: what would make you go back? And the answer was, ‘If it was cheaper.’ Well, that goes against what we’re about to face where everything is going to go up.”

“Next year is going to be about ‘be unique or be cheap’, but anything in the middle will be really difficult to get through”

The prospect of further consolidation in the festival market also cropped up, with Wright deeming it “inevitable”.

“I don’t necessarily think it’s a good or bad thing,” he said. “There’s definitely and always will be a market for independent festivals in the same way that grassroots venues and independent venues are a vital part of our business. But I think consolidation, in the same way it is with the agency businesses, is inevitable to some degree.”

“Consolidation is part of our business,” added Kornett. “You also need to watch carefully for consolidation in stage hands/crew-type of businesses. Because I think there will be quite a few companies that need to seek support in order to get through what they experienced this year.

“Recession is going to hit us and I think we will see people that left our industry return because logistics and retail and construction, all of them will suffer. Starting a new festival will be a big challenge. I like to say that next year is going to be about ‘be unique or be cheap’, but anything in the middle will be really difficult to get through.”