Roskilde's Anders Wahren and Christina Bilde opened up on the past, present and future of the Danish institution in the IFF keynote interview 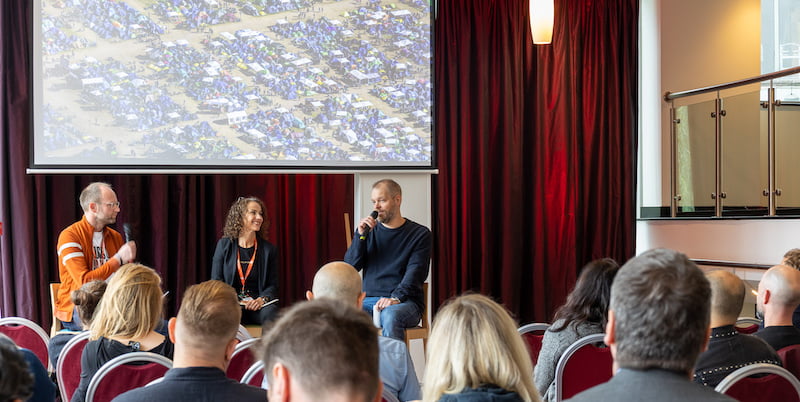 The Roskilde keynote at IFF 2022

Roskilde’s Anders Wahren and Christina Bilde opened up on the past, present and future of the Danish institution in a keynote session at the International Festival Forum (IFF) in London.

Wahren, who has been a booker of Denmark’s biggest festival since 2003 and programme director since 2014, and deputy director – communications, partnerships & philanthropy Bilde sat down with ILMC head Greg Parmley to discuss the event, which celebrated its half-century this year.

Roskilde Festival recently announced a revamp of its booking team and an increased focus on volunteering in the wake of its recent 50th anniversary edition, with Wahren retaining overall responsibility for music, art and activism, but being succeeded as head of booking by Thomas Jepsen.

The festival is hosting a special 50th birthday celebration in the Glasshouse of IFF’s host hotel, the Holiday Inn in Camden from 9-11pm tonight.

First, here are some of the highlights of the hour-long Roskilde: 50 Years Young interview, starting with the first edition Wahren attended as a fan…

“The first show I saw on the Orange Stage was Sex Pistols. And maybe it’s too much to call it a show…”

Anders Wahren: “It was 90,000 people in a field mostly wearing black boots and T-shirts, and it was an era of grunge, rock and metal. The first show I saw on the Orange Stage was Sex Pistols. And maybe it’s too much to call it a show because they tried to play but were hit by bottles and cups. They tried to come back and play three times, but in the end they had to give up. So that was my introduction to what it was like to be at the Orange Stage. Luckily, it was first and final [like] that. But there was still this community feeling. Not with the people throwing shit of course, but everybody else in the crowd. I was 13 at the time, I was going with some friends. But I also had friends from school who had been going since they were small kids going with their parents.”

AW: “It’s reflecting audience taste and also what’s happening in the music world and in the world as such. We wouldn’t still have a young audience if we booked the same acts that were there in the 70s or 80s, there needs to be evolvement over time. Of course, some of the people who started coming when I did, complain: ‘Why are you not booking so many rock bands anymore?’ And we have got that for 20 years now because we don’t just book rock bands, we book a lot of other stuff as well. It’s very important that we keep the line-up fresh to attract new audiences and keep the festival moving. I think that’s a very good reason why we’re still here and having the 50th anniversary.”

Christina Bilde: “The average age [of the audience] has been 24 for the last 15 years. But this year, we had an average age of 27. I think some of the explanation is that the tickets were sold in 2019/2020 and the audience kept their tickets, so they rolled over. And of course, having a break of three years, the audience also grew older. We also think it being the 50th festival made some older people want to come. But that gives us a challenge, of course, because we want to get the younger participants back again. A challenge that we share with a lot of other events is how to get back the generation that haven’t been able to go to festivals during the pandemic.”

Jules de Lattre (UTA agent): “The Roskilde poker face is something that all agents experience at one point or another. We’re talking to the programming team and you could be pitching the next Daft Punk and doing so with passion, emotion, and throwing everything at it. What you will get back is not a sliver of visible interest or emotion, which is really quite unsettling the first time it happens for some of the younger agents and coordinators. We always have to reassure them after and say, ‘This is just the Roskilde poker face and actually you will probably get an offer for the act you least expect to have on the festival.’ I think that that points to – and I’m saying this seriously now – the impeccable A&R over the years at Roskilde.”

AW: “We should play more poker! Volunteers are a big part of the Roskilde organisation. We also have them in the midst of our booking team and that’s important because they are not entwined in the music business as such, so they just listen to a lot of music, go to a lot of shows, keep up with the current scenes and inform us. So there’s a lot going on behind the scenes and the poker face that we try to put up. Also, we’re not the sole decision makers and are not able to make the offer right away because we always want to discuss internally and make up our group mind. So it has never been my taste that dictates what a good Roskilde line-up is, it’s a combination of many people.”

CB: “Roskilde has been quite good at listening and picking up trends from our audience over the years , even before the trends were visible in other areas of society. Listening to the young audience and being brave enough to move with them is part of the experience as well.”

AW: “It felt good. I was a little worried that some things might have changed and maybe the audience only wanted to [see] the big headliners. How would we know? Three years off is a lot, so it was good to reconnect with the audience. Of course, it was a tough year: there were more cancellations than ever and there was a strike warning from Scandinavian Airlines. The pilots were going on strike the first day of the festival and they postponed it a week. But still, it was a lot of stress.”

AW: “The honest answer is we don’t know. It’s hard to say now that it’s going to be in this direction or that direction because it will probably change a few times, so we’ll see. We’ll keep evolving and will hopefully keep up with wherever the most interesting things are happening in art and music, we’ll go there and take the audience with us.”