SWMunich's 20,000-cap MUCcc Arena has passed another significant hurdle after its urban zoning plan was backed by council officials 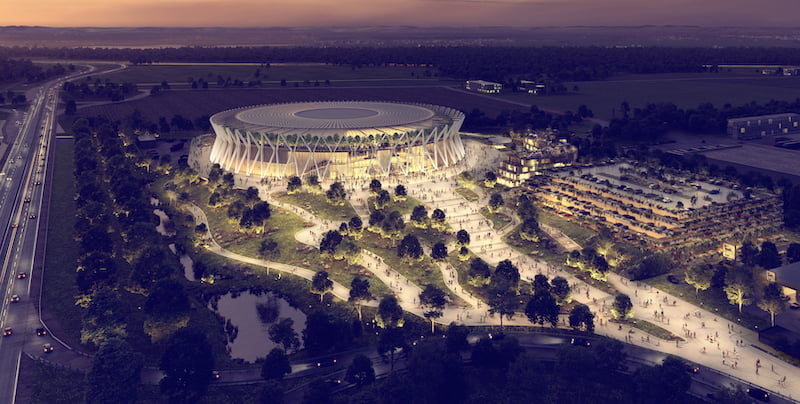 The decision by Freising City Council means Bavaria-based developer SWMunich Real Estate has passed another significant hurdle towards the development of the MUCcc Arena in Munich.

SWMunich will build and operate the 20,000-cap venue, backed by more than €300 million of private sector investment.

The arena will be located in a new green space next to LabCampus, the technology and innovation centre at Munich Airport, with the seating to be arranged in a 270° horseshoe shape. Global design firm Populous was chosen as the architect earlier this year following a multi-stage architecture competition.

“We are delighted with the clear vote”

“With the submission of the zoning plan, Germany’s first climate-neutral concert arena has taken another important step forward,” says SWMunich MD Lorenz Schmid. “We are delighted with the clear vote.”

The new arena will be climate-neutral thanks to lifecycle-based planning to reduce the carbon footprint during construction and climate-positive management of the operating phase. Several thousand solar panels on the roof of the arena and around the site, coupled with the potential for geothermal energy and district heating, will ensure that the energy for operating the arena can be generated and supplied on site.

According to a Deloitte study, the new venue will bring an annual gross value added of around €285m to the region. A construction start date is yet to be set, but it is hoped to open in the next five years.

Schmid detailed the plans in a recent IQ article.

“Our project brings Munich into the champions league of indoor concert venues,” he said. “The new arena will be a cultural boost, an economic and tourism driver, and a role model in terms of sustainability standards – economically, ecologically, and socially.

“In the Munich region, there is neither an arena specially designed for concerts and live shows nor an indoor location with a capacity of up to 20,000 guests. We are closing this gap and thus supplementing the cultural offerings in the region and throughout Germany at a time of increasing demand.

“Our goal is to maintain world-class levels of quality and visitor comfort while remaining well below the energy requirements of comparable arenas in Europe.”