A total of 1.4m tickets have already been sold for 2023 shows in Portugal, Spain, UK, Italy, Switzerland, Denmark, Sweden and the Netherlands 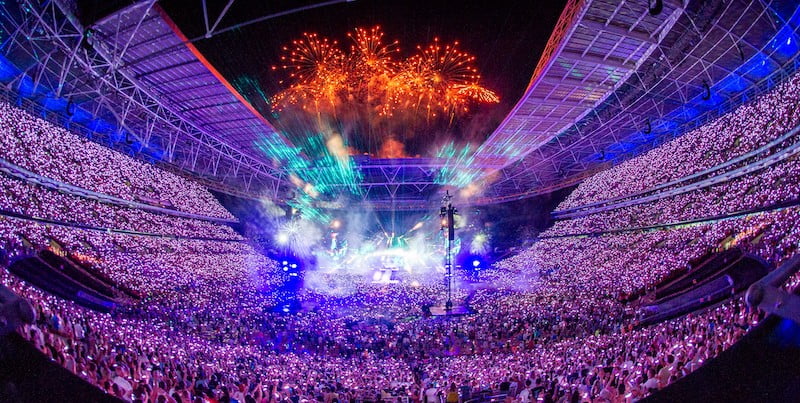 Ticket sales for Coldplay’s Music Of The Spheres World Tour have hit 5.4 million after the band’s 2023 UK and European stadium dates went on sale.

A total of 1.4 million tickets have already been sold for next year’s shows in Portugal, Spain, UK, Italy, Switzerland, Denmark, Sweden and the Netherlands, including a host of extra dates added due to demand.

The group wrapped up the 2022 European leg at Hampden Park, Glasgow, on Wednesday (24 August). The global jaunt, which began in March, switches to Latin America in September.

The tour has also been heralded for its groundbreaking sustainability initiatives, which include a show powered by 100% renewable energy in almost all locations; the world’s first tourable battery system (made from 40 BMW electric car batteries); power bikes and kinetic dancefloors allowing fans to help power the show.

It has also included solar panels and wind turbines at every venue; a pledge to cut tour emissions by 50%; incentives to encourage fans to travel by green transport; and one tree planted for every ticket sold.

“The band is a juggernaut, a true powerhouse”

Costa Rica – where the band became the first artist to sell out two nights at Estadio Nacional – marked the starting point in March, prior to a stop in the Dominican Republic. A record-breaking visit to Mexico then followed, which saw them crowned as the first international act to play four sold-out concerts at Foro Sol in Mexico City and the only act to sell out two nights at Estadio BBVA in Monterrey, as well as Estadio Akron in Guadalajara.

“It’s the most spectacular run through Latin America ever,” Live Nation LA president Bruce Moran told IQ earlier this year. “Our expectations were high and we were aggressive in terms of the routing, but it has surpassed any expectations. It’s truly remarkable. The band is a juggernaut, a true powerhouse and we’re really excited to be involved.”

The next issue of IQ features an in-depth look at the groundbreaking Music Of The Spheres tour. Issue 113 of IQ is out next week.