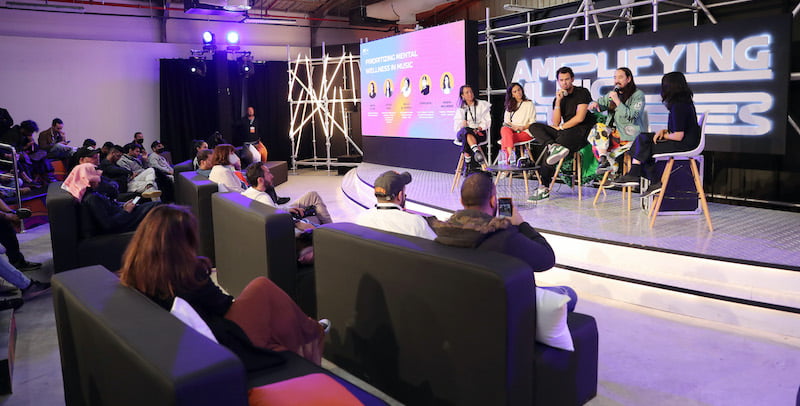 The conference, a first of its kind, was recognised as a huge success by 87% of attendees of its debut edition. XP is home to groundbreaking discussions aimed at providing infinite opportunity for Saudi to become part of the global music scene.

The inaugural event – organised by the Saudi music entertainment company, MDLBeast – welcomed more than 4,000 music industry movers. Together, they learned from a diverse set of 150+ speakers from more than 25 different countries – of which half were female – ensuring a fair balance and representation in action, not just words.

The three-day conference also fulfilled its commitment to diversity through its day and night programming, where daytime workshops and sessions were shaped around four main pillars – Talent, Policy, Scene, and Impact – and each night came with a packed schedule of exciting live entertainment, headlined by local and regional artists.

This year’s edition from 28-30 November is also focusing on innovation. Discovering, developing, and empowering talent is key to XP Music Futures. An independent study following 2021’s maiden XP discovered that attendees found immense value in the conference’s use of local and regional talent for its daytime workshops and nighttime performances, with that relatability offering a significant degree of inspiration to the majority of attendees.

Two of the talents featured as part of XP last year were Marcela Rada and Banah Anabtawi, both of whom will be returning to Riyadh again this November. A skilled sound engineer and college professor specialised in immersive audio, Rada has years of experience working with independent artists and was one of the motivating speakers at XP 2021.

“The music business in Saudi and the region is still in its early stages, which in return, provides a huge opportunity”

“I had no clue what to anticipate as it was my first time speaking in the Middle East, but it turned out to be an experience of a lifetime and felt so natural,” said Rada. “The music business in Saudi and the region is still in its early stages, which in return, provides a huge opportunity. This is the moment we must establish a solid foundation based on important principles, education and learnings to ensure success for the local artists.”

Looking back on her experience, Bahraini singer songwriter Anabtawi said: “Having grown up in the Eastern province, it was surreal to finally be able to present my music to Saudi Arabia for the first time. I was blown away by how versatile and accepting the audience was and loved meeting other regional creatives and artists at XP.”

In support of XP’s efforts to grow Saudi and regional talents, Rada is developing master workshops for this year’s edition, titled “Music Production: From Zero to Hero,” which will cover basics from how to build your own home studio, to recording and mixing techniques, to immersive audio.

Commenting on the initiative, Rada said: “It’s important XP provides tangible support and I’m very excited to be hosting this initiative as part of that. Over the span of three-days, music production courses will be offered for an opportunity of in-depth learning which will no doubt upskill talent to the next level.”

Stressing the importance of accessible education, Anabtawi feels strongly about mentorships and talent managers to support talent in the music scene.

She added: “An important role which I believe we lack in the region are talent managers. A lot of the artists either depend on their experience or their network but there are very few, if any, official professionals in the sphere to support in building contracts, commercialising and marketing the talent and finding opportunities.

“XP provides a great platform for artists to put themselves out there, network and build relationships that could further foster their careers and fill those gaps.”

As the gateway to music in and from the MENA region, Rada has huge enthusiasm for talking about regional talent.

She said: “I’m confident international interest will significantly rise if we were to truly paint an accurate picture of the scene here. It’s incredible and XP drives this a step further. The exchanges being held benefit the music ecosystem as a lot of these important topics being discussed are not only relevant for the region.

“People tend to fear what they don’t know. However, music is a global connector and XP is leveraging this for the interest of the Saudi people, the region and the globe. There is an opportunity for a fusion of regional sounds with international artists.”

Sharing their views on what is vital to build a music career, Anabtawi stressed the importance of keeping it real when it comes to not only talent, but self-awareness.

She explained: “Don’t get lost in the process of commercialising your talent and always stay true to yourself. Also, as important as it is to have a unique voice, your network is also crucial so keep putting yourself out there. There is nothing called luck, only hard work.”

Similarly, Rada believes that relationship building is a key ingredient to career success.

“Never burn bridges, undersell yourself or play for free, and always stay focused and open to learning anything from anyone you meet,” she said.