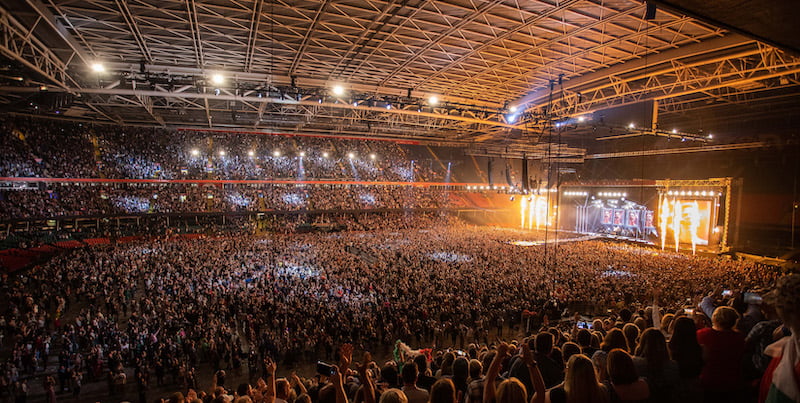 Kilimanjaro Live boss Stuart Galbraith has revealed the company has sold 1.5 million tickets for its summer shows as it roared back from the pandemic.

Kili co-promoted Ed Sheeran’s UK stadium tour with FKP Scorpio UK and staged further stadium dates with Stereophonics, as well as a host of other outdoor concerts including its Kew the Music and Live at Chelsea series.

Galbraith tells IQ the sheer volume of shows delivered – which included a backlog of rescheduled dates from 2020/21 alongside new bookings – has been “remarkable”.

“When we came out of the pandemic for the first time around autumn last year, we actually had 950 shows on sale, which is the most we’ve ever had as a company,” he says. “So what we’ve done, certainly through last autumn and the first seven months of this year, is plough through that huge volume of rescheduled shows.”

“When you step back and look at what the team has achieved, it’s fantastic”

In addition, Kili has been involved in a string of major arena tours with the likes of Simply Red, Craig David, Hans Zimmer, UB40, Jeff Dunham and Sam Fender, plus theatre gigs by the likes of Jeff Beck, Nick Mason, Tony Hadley and Dita VonTeese.

“It’s remarkable to think that’s all done now,” reflects Galbraith. “We’re now almost at the point where the only things left are some Andrea Bocelli shows in October and everything else on sale is new stuff. When you step back and look at what the team has achieved, it’s fantastic.”

The UK leg of Sheeran’s + – = ÷ x (Mathematics) tour wrapped up with five dates at Wembley Stadium at the start of this month. Coming on the back of the singer’s record-shattering 2017-19 ÷ (Divide) run, which surpassed U2’s 360° as the highest-grossing tour ever, Galbraith says the 31-year-old’s timing could not have been better.

“Ed Sheeran’s UK tour played to just under a million tickets, which is stunning”

“His timing with regards to the pandemic was just remarkably perfect because he’d stopped working,” notes Galbraith. “We finally finished the Divide tour in Ipswich in 2019 and he had intended to take 2020 and 2021 off anyway. And then we put the tour on sale at the end of September last year, when customer confidence was at its peak. Everything was fine and the world was getting back to normal. Then Omicron reared its head in late November, but by that time we’d sold 95% of the tickets.

“We picked the tour up in late May [2022], starting in Cardiff, and by then, any issues with regards to Covid restrictions and practical arrangements on the road had pretty much disappeared as well. So it was remarkable timing.”

He adds: “The tour was just phenomenal. Ed’s performance, the addition of the band in some elements of the show and the scale of the production, have taken it to a different level. Excluding Ireland, which we’re not involved in, that UK tour played to just under a million tickets, which is stunning.”

Kili also reunited with old friends Stereophonics, who were joined by an all-star cast of Welsh greats headed by Tom Jones for the band’s two homecoming gigs at Cardiff’s Principality Stadium in June.

“I’ve worked with Stereos since the early ’90s and these were their two biggest ever shows. We sold 110,000 tickets across the two dates. It was also broadcast not only on BBC Wales, but also on BBC Two, which was the icing on the cake.”

“While the hot stuff is really hot, some of the other stuff has proved hard work to sell”

However, Galbraith is keen to stress the summer has not been without its challenges.

“In terms of selling tickets, there’s a lot out there,” he says. “And while the hot stuff is really hot, some of the other stuff has proved hard work to sell. But again, most of that is rescheduled shows – some of which we put on sale in 2019 and we’re finally delivering in the summer of 2022, so it’s almost three years since the customers have had those tickets.

“A perfect example of that is Belladrum festival which takes place at the end of July. The tickets for Belladrum were sold in August 2019. and so those customers will have held those tickets for a full three years when we actually finally get to deliver the festival that they paid for, it’s quite remarkable.”

Kili is part of the DEAG group of companies and Galbraith suggests the UK market is “a few months ahead” of many of its European contemporaries in terms of its post-pandemic recovery.

“The UK has had a very, very good summer in comparison to other marketplaces”

“While things are up and running now in Germany, certainly there are still levels of restrictions, levels of testing and elements of life that are still not normal,” he says. “And what we’ve seen in the UK is things that only truly come back once society really accepts that Covid is over. But also, that it doesn’t necessarily come back with the roaring ’20s that we’d all hoped it would, because there is just so much demand now for customers’ money, not just from an entertainment point of view, but from other pressures: inflation, heating bills, recession, etc.

“I think the UK has had a very, very good summer in comparison to other marketplaces and we’re seeing ticket sales becoming stronger. We’ve ended up selling a million and a half tickets this summer, which is a huge success for us. And it’s brilliant to finally be back on the road again and doing what we do best – albeit the teams have faced some huge challenges, which we’re very pleased to see that they’ve overcome. But we hope that those challenges will diminish as we head into what will hopefully become a bit more of a normal business sector again.