The Scottish indie singer/songwriter made history by selling out two 50,000-cap nights at Glasgow's Hampden Park 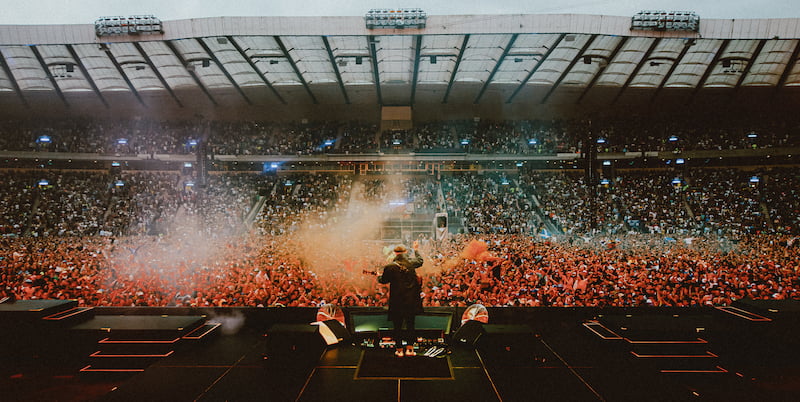 DF Concerts’ promoter Dave Corbet says that Gerry Cinnamon is “rewriting the rules” after the Scottish singer-songwriter made history by playing to 100,000 fans over two nights at Glasgow’s Hampden Park.

“The energy of the crowd across both shows was electric and they were with him every step of the way,” Corbet tells IQ. “It was one of the best stadium productions that I have ever seen and the sound was fantastic – there really is nothing like the Hampden roar.”

Staged by DF, the concerts saw Cinnamon crowned as both the first independent act and the first Scottish artist to sell out multiple nights at the national stadium. Support came from The Charlatans, Jake Bugg, The Snuts, Travis and Vistas.

“Gerry is an absolute force of nature and his success knows no limits,” says Corbet. “DF Concerts has worked with him since the very early days of being in bands on the Glasgow music scene, and there are so many factors which have contributed to his huge success which includes how fiercely independent he is.

“To see Gerry go from playing small pub shows at the start of his career to becoming the Scottish artist with the most tickets ever sold at Scotland’s national stadium Hampden is phenomenal and I can’t wait to see what comes next.”

The UK’s biggest independent artist, 37-year-old Cinnamon has built up a huge, organic following since self-releasing his 2017 debut album Erratic Cinematic and topped the UK charts with 2020 follow-up The Bonny.

“Gerry has never been one to conform and what keeps his fans coming to support him is how relatable he is,” adds Corbet. “He is rewriting the rules on how to be a successful artist and is a man of the people which resonates not only with the people of Scotland but with his fans around the world.”

Represented by CAA’s Andy Cook, Cinnamon has headlined a handful of outdoor gigs across the UK and Ireland this summer.  He played a 25,000-cap gig at Swansea’s Singleton Park – the second biggest show ever held in the Welsh city – last month, along with sold-out Irish shows at the 25,000-cap Malahide Castle Dublin, and Musgrave Park Stadium, Cork.

He also played his third headline performance at Belsonic festival in Belfast’s 20,000-cap Ormeau Park, having already set the record in 2021 as the first artist to sell out two headline shows at the venue.