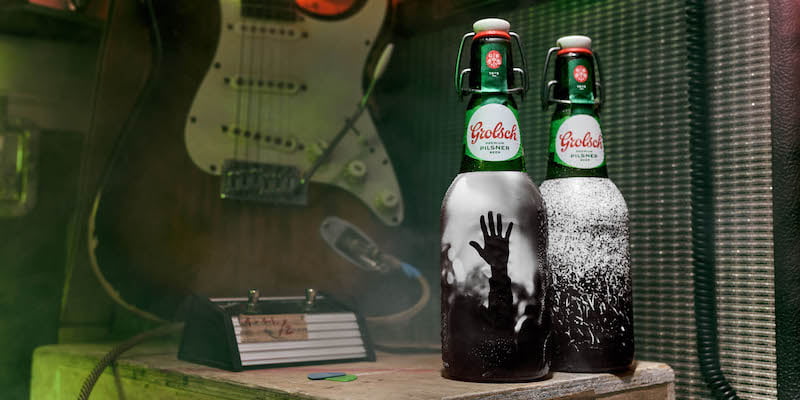 Dutch brewing company Grolsch has launched a new campaign to support the live music industry by partnering on a series of collector’s edition beer bottles in support of the UK’s Music Venue Trust (MVT).

The pilsner brand, which has donated a lump sum to the MVT, has teamed with music photographer Dean Chalkley on the initiative. Chalkley has chosen a series of mosh pits, concerts, festival crowds and gigs to feature on the bottles.

Every bottle doubles as a piece of unique art, each labelled with a unique number. A limited edition run of 100 is available now.

“It’s great to be part of this exciting new Grolsch campaign that celebrates the live gig experience from the crowd’s perspective, and gives back to the live music industry through the Music Venue Trust,” says Chalkley. “After everything it’s been through over the last couple of years I’ve chosen four images for the Grolsch bottles that reflect the magical energy you can only get at a live gig.”

Grolsch was one of the sponsors at this year’s NME Awards and says the latest scheme is just the start of a longer-term campaign to support the live music industry and has announced a competition to give aspiring music photographers the chance to have their photography featured on a new set of Grolsch bottles.

Snappers over 18 are encouraged to submit their own photographs taken at music events – whether an open mic night at a pub, a summer festival or an open-air concert – by posting them on Instagram with the tag #GrolschLiveMoments. Chalkley will be joining a panel to judge the entries, with the winner announced next month – and the first 500 entrants will win a case of beer.

The recent ILMC 34 discussion Sponsorship: Falling through the cracks? looked at how the pandemic has changed the game for live music sponsorship.