Bon Voyage: ‘Special’ ABBA show off to a flyer

AV specialist Solotech details its work on the groundbreaking production, which is set to run in London until May 2023 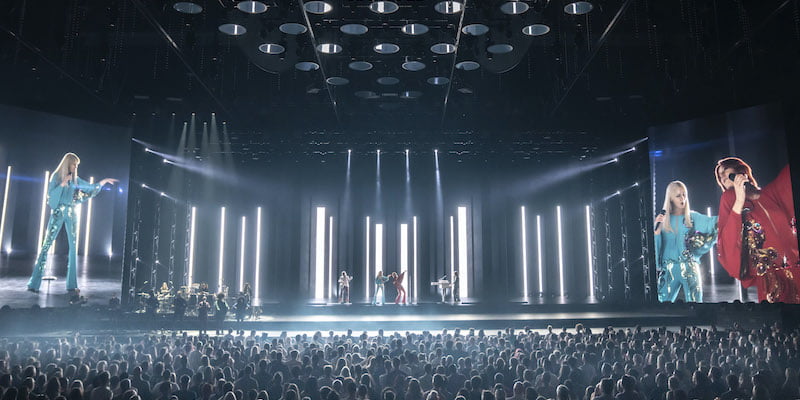 The project, which blends the virtual and physical worlds, brings the Swedish group back to the stage (in avatar form) for the first time in 40 years, backed by a 10-piece live band.

Agnetha, Björn, Benny and Anni-Frid spent five weeks being filmed by 160 cameras for motion capture as they performed the songs that make up the show’s 95-minute runtime. The show debuted to rave reviews at the demountable 3,000-cap ‘ABBA Arena’ – a purpose-built venue devised by entertainment architect Stufish – at Queen Elizabeth Olympic Park on 26 May.

ABBA’s Benny Andersson recently told Variety that more than 380,000 tickets have already been sold for the production, which is currently set to run until late May 2023. Tickets are priced from £21 to £175, with a variety of different ticket types available for the concerts, including general admission (standing), auditorium seating and dance booths – of which there are eight, each named after people from the ABBA universe.

Global audiovisual and entertainment technology leader Solotech has worked on concerts by the likes of Taylor Swift, Bruno Mars, Paul McCartney and Lady Gaga, and brought its expertise to the Voyage project, led by director of special projects Ian “Woody” Woodall in collaboration with ABBA’s production team.

“This project has been special as we’ve spent two years of our lives working on it,” says Woodall. “It is the most technically complicated and challenging project I have ever been involved in. This is proven by the fact that everyone who has been there cannot find the words to describe it.

“The technical elements of the show have been virtually flawless from the rehearsals through to opening night on a show that is breaking new ground. These are accomplishments that we are extremely proud of.”

The company’s Paul “Macca” McCauley oversaw the installation of the rental equipment in the venue, and served as the host to technical demos of the system in the months leading up to the show, while the firm’s Robin Conway oversaw audio, Oli James handled lighting and Alex Mulrenan managed video and cameras.

Ticketmaster UK was named the official ticketing partner for the Voyage concerts last year, tasked with providing the technology required to run all shows as 100% digital.

“The world has never seen a concert on a scale like this before and we’re beyond proud to be involved,” said Ticketmaster UK MD Andrew Parsons. “We’ve had the privilege of working alongside the ABBA team since the concert’s conception, and together we’re going to give ABBA fans the greatest experience from the moment they buy a ticket right through to show time.”