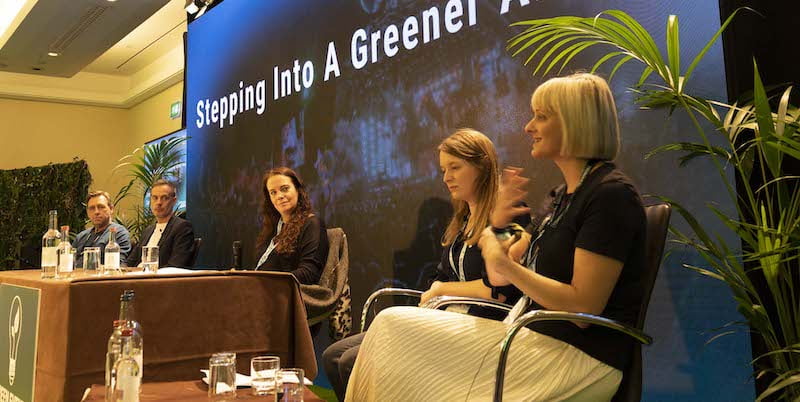 UK arena executives have given an insight into the strides being made to turn the sector into a greener business.

Representatives of London’s The O2 and OVO Arena Wembley, Scottish Event Campus and Manchester’s Co-op Live spoke of the direction of travel at the Green Events & Innovations Conference (GEI), the leading gathering for sustainability at live events.

“I think it does prove that people are a) passionate and b) and also doing lots about but also see there’s still a lot to be done all together with the entire industry’s help,” said panel chair Lucy Noble of the Royal Albert Hall (RAH). “So let’s keep going and hopefully if we reconvene next year we’ll have lots more exciting news and be able to talk about new developments.”

Arenas have taken huge strides to strategically reduce their carbon emissions, eliminate waste, green up their food and beverage offerings. Noble recently detailed the RAH’s sustainability focus in an interview with IQ, while the SEC hosted last year’s COP26 climate summit prior to its OVO Hydro in Glasgow becoming the first arena in the world to achieve A Greener Arena (AGA) certification for its commitment to sustainability.

Here is a sample of what the GEI: ‘Stepping Into A Greener Arena’ panellists had to say about their green efforts to date…

“We’re part of ASM Global, so we’ve got our own plan in place there, and we obviously work closely now with OVO Energy. Within ASM, we’ve got what’s ASM Global Acts, we’ve got these three main pillars that we work towards that encompass environmental sustainability, community, and diversity and inclusion. So we work with those headings across what we do. One big thing that we did a few years ago as a venue is we replaced all of the house lighting with LED. It was a big investment, nearly quarter of a million pounds, but the payback on that was three years. We only purchase renewable energy. We don’t sell any waste to landfill. We have recycling bins on the concourse, we do all the usual things that you would expect most venues will do. We’ve gone red meat free in the arena, so you can’t get a burger at the venue. You can get chicken burger. It’s bad news for chickens, but it’s been good for the venue and nobody buys a ticket for a show because they want a burger. If they’re hungry, they’ll get veg, chilli, loaded fries or they’ll get something else. It’s a really good initiative and clearly makes sense.”

“AEG has been focused on sustainability for 10-plus years. We have a global framework strategy called 1Earth, which is very much focused on water conservation, waste reduction and reducing carbon emissions. We’ve been harvesting rainwater for the last 10 years, focused on reducing water in all of our bathrooms and washrooms. We’ve been purchasing green energy from a verifiable source for about eight years. All of our energy is tracked and metered throughout the building and we’ve been doing that for a long time. We segregate all of our waste, a minute proportion – less than 1% – goes to landfill, the rest of it is dealt within a sustainable source. We’ve been trialling wind turbines on site for a year or so now to see if that can play a part in our roadmap to net zero. We set a green team up. I always say I was learning about climate change 30 years ago when I was in school, it’s not a new phenomenon. But I think in the last five years it’s just in everybody’s consciousness and Blue Planet 2, definitely in the UK was a real catalyst, particularly at The O2. That then led to us setting up or creating a CSR programme. We have four pillars: sustainability, charity, accessibility and community, and it’s called Good Vibes All Round. It was our first foray into more of a socially purpose driven venue. It’s very much a journey, and it’s a journey that is going to continue for a number of years.”

“We launched our sustainability strategy at the start of this year. The key headlines around our strategy include a net zero 2030 commitment. We did a carbon footprint assessment last year to establish what our baseline is and we’re working towards reducing that. Another key goal for us is our people goals, so that’s about how we engage with our own team to be more sustainable. We’ve got a sustainability committee now, so that has representation from all the different departments of our business. Another key one is resource so that’s all about reducing our waste and increasing recycling. We’ve got a few targets around that which align to zero waste Scotland’s targets, like reducing waste volume by 10% and increasing recycling to 70%. OVO Hydro is the first arena in the world to get the Greener Arena award, so that was a fantastic project to work towards. It is an incredibly comprehensive assessment. But equally, it gives you really good areas to focus on where you could be making improvements.”

“I’ll start by talking about a venue which is open, which is [OVG’s] Climate Pledge Arena in Seattle. It’s the first arena to actually achieve zero carbon certification, which is amazing, so we can learn from that. How do they create their own energy? They’re using solar power. How are they reducing gas? They’re 100% electric. They’ve got aluminium cups and are reducing all of their compostable waste. They’re also looking at how their fans travel to the building. At Co-op Live, we’re doing a very similar thing. We’ve got a football pitch and a half of solar on our roof. We’re collecting the lovely Manchester rainwater and we’re going to use that to flush our toilets and to irrigate all of our plants. We are also going to look at heat source. And then we’re also looking at all the different elements of technology from the lighting to the bin systems that will drive the most efficient building possible. And then the operational side is the bit we’re really starting to get our teeth stuck into now. We’ve got to work together to achieve the ambitions but at Oak View Group, we’re really proud to say that this is a top priority for us and all of our venues are going to be driving the carbon neutral positioning as fast as we possibly can achieve it.”