Six of the best from Alex Hardee & John Giddings 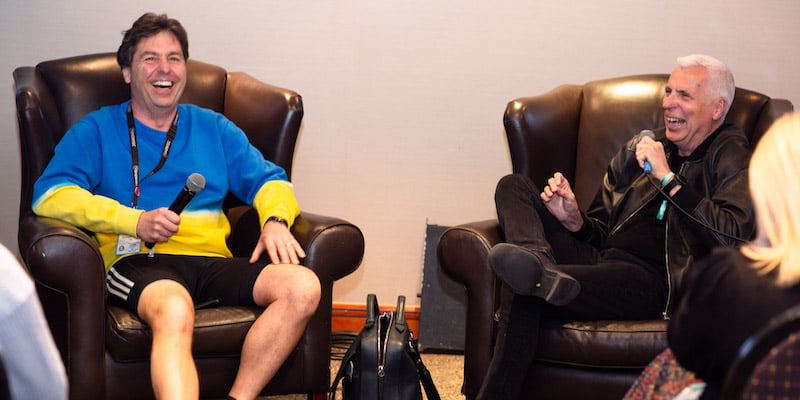 Heavyweight agents Alex Hardee and John Giddings served up a treat for ILMC delegates by starring in one of the most entertaining panels yet seen at a music business conference.

Coda Agency co-founder Hardee, now of Wasserman Music, and Isle of Wight Festival promoter Giddings, of Solo Agency, sat down in front of a standing room only audience to review their respective career paths and retell some of the many stories of their lives in the concert industry.

Why they became agents…

John Giddings: “I couldn’t get a real job. When I was 14 at school my mate said his group had split up and why didn’t I learn to play bass and pull a few chicks, so I thought it was a good idea. But then we were playing Harpenden Youth Club and a skinhead came and stood in front of me and said, ‘If you don’t stop playing now, I’m going to hit you,’ which was the end of my musical career. But I was better at booking the gig than being in it and my mate was social sec at the local college and he got a job in the music business. So I knew if you went to university and became social sec, you’d meet people in the music business and get a job. I got offered a job… Barry Dickins couldn’t decide between me and Paul Loasby, so he employed both of us.”

Alex Hardee: “Believe it or not, I actually was doing aeronautical engineering at university. My brother [the late Malcolm Hardee] was a comedian and he introduced me to lots of other comedians like Steve Coogan, Eddie Izzard… And I started booking them while I was a student. Then I got a 2:2 in my second year in aeronautical engineering and [careers’ advice] said, ‘If you work really hard and get a 2:1 then you will be able to work in Enfield Aerodrome and get £16,000 a year.’ And I went, ‘Fuck no, I’m already earning £25,000 a year!’ So I left university the next day and that’s how I became an agent. I mean, some still say I am a comedy agent…”

JG: “When you start, you’re petrified about losing an act because you need to earn the money to pay your mortgage. And then finally, when you earn some money and you buy your house, the relationship changes. If a group comes to you and says, ‘We want to do this tour of beaches and rent a big top and go around the UK.’ And you can tell them it’s a fucking stupid idea which you couldn’t tell them before because you’re worried about losing them. But then when acts get to a stadium level, it’s a different level of representation. I’ve always thought groups should pay little commission when they start and more commission when they earn more money, but… it doesn’t work like that. Try telling a group they should pay you more money when they get bigger. And the poor little group has no money to pay you in the first place.”

AH: “As soon as you’re worried about losing an act, you’ve already lost them. What’s quite interesting is when an artist starts to become unsuccessful they can’t fire the record label. So probably first thing they’d do would be to fire the agent, because they don’t have a contract. But it’s interesting in Covid… I thought there’d be a lot more change. But the agents couldn’t get blamed for nothing happening for the last two years so they couldn’t get fired!”

“The middle is being squeezed and it’s going to be quite a tough summer. A lot of shows aren’t going to hit that breakeven point”

JG: “Shows that went on sale before Christmas have done quite well, but shows that have gone on sale since then are beginning to struggle and it’s becoming soft in the market, because there’s three years’ worth of touring in one year. So we’ve all got to watch out. I don’t think it’s going to come completely back to normal until the start of ’23. Everybody’s putting on a brave face, but there’s a lot out there and it costs a third more to fill up your car, or your electricity bill now… If you’re a punter, you’re going to worry about your food bill, as opposed to buying a ticket for a festival.”

AH: “This year, there’s too much on, there are too many shows. There’s more tickets on sale, but the P&Ls for the individual shows aren’t making profits. So it’s a good year to be an agent or a ticketing company, but the promoters are going to suffer and that will have to get readjusted the following year. The middle’s been squeezed and it’s going to be quite a tough summer I think… A lot of shows aren’t going to hit that breakeven point.”

JG: “The kids are still going out. I mean, the Little Mix tour we keep releasing production seats and they sell like hot cakes. Harry Styles sells out.”

AH: “Billie Eilish… The top never gets squeezed but the middle acts, the middle festivals, the middle events, there’s a lot of trouble there. it’s going to be hard.”

JG: “Jay-Z was playing [Isle of Wight] and the audience of going wild. I thought, ‘An audience can’t go more wild than they are now,’ and then Kanye West walked on behind him… I turned around to my left, and there was Beyoncé standing next to me and I thought, ‘This is worth it.'”

AH: “This isn’t my best one, but it’s reminded me of a good one: I was at Hyde Park and I managed to blag on stage to Jay-Z. There was Beyoncé, Sacha Baron Cohen, Madonna and somehow me on the side of the stage and I was fucking desperate for a drink but there weren’t any. I looked around and Prince Harry’s there with a crate of beer. I go, ‘Can I have a beer mate?’ And he goes, ‘Here bruv’. And I thought, ‘Fucking “bruv!”‘ I went, ‘Oh thanks. where are we going afterwards then? I hear it’s all back to yours because yours is the closest.’ That’s a true story!”

“All the contracts in the world are meaningless, you have to deliver on your word”

JG: “When people bullshit you – it’s so boring. The easiest thing in the world is to tell the truth, because then you can at least remember what you’ve said. All the contracts in the world are meaningless, you have to deliver on your word. And it’s so disappointing when people let you down and don’t deliver… It’s rife with bullshit, that’s the thing I like least about it.”

AH: “Smoke and mirrors is much harder nowadays, everything’s a stat, you can’t say I sold out Brixton if you didn’t sell out Brixton. Within two seconds, you can find out every ticket count, everyone can find everything.”

AH: “The promoters used to say they were less?”

JG: “Yeah, because they didn’t want to pay you as much and now everybody’s embarrassed by it so they inflate it when they tell it to you. Unless you speak to Simon Moran, who knows every ticket sale for every show throughout the universe…”

Advice they would give their 16-year-old selves…

JG: “It’s so long ago I can’t remember, seriously. I mean, to be in this business you have to work really hard. You have to work the room and you have to deliver on your word. It’s not brain of Britain stuff, but people have to be able to trust you. If people can trust in you then they’re confident in what they’re doing.”