Touring Russia ‘has to be banned for a long time’

The future of the concert business in Eastern Europe was brought under the microscope during the ILMC panel Ukraine: Conflict in Europe 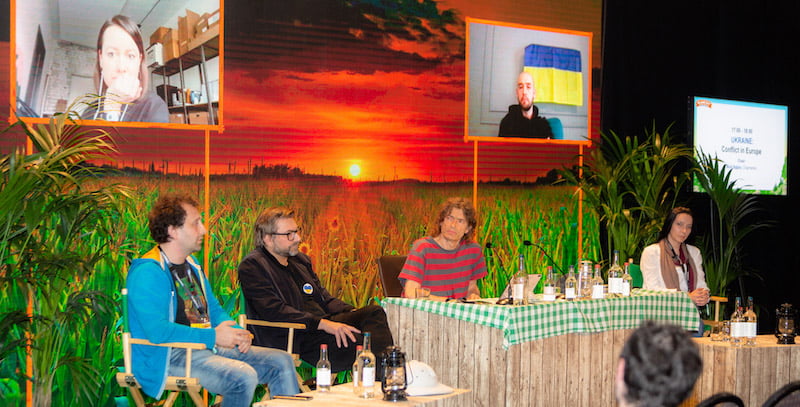 The future of the concert business in Russia, Ukraine and neighbouring countries was brought under the microscope during a powerful ILMC panel.

Maletskyi was based in Kyiv before heading west the day Russia launched its invasion. “On 21 February, I woke up 8km from Boryspil airport and I saw the first rockets with my own eyes,” he said.

The promoter provided an update on music in his homeland, saying that some shows were going ahead in bomb shelters.

“This is the reality of the Ukrainian music industry at the moment,” he said. “Everyone is doing what they can. I heard maybe two or three cases where people were saying, ‘We aren’t making new music because it’s hurt us too much.’ When you’re hiding in a bomb shelter, it’s really hard to be creative… So the creative part of this business is frozen as well.”

“I can’t imagine that, without real peace, any international act will play in Russia”

Maletskyi said an anti-war video released last month by Russian rock artist Zemfira, which was shown to delegates during yesterday’s session, had garnered a mixed response in Ukraine.

“Generally, we are really thankful to everyone who is supporting the Ukraine wherever they can,” he said. “Talking about the Zemfira video, I was personally thankful but Ukrainian society was divided because she posted it only a month after the war began.

“Some people in the industry, as well as the acts, are thinking that this video should have been posted the beginning or maybe five years ago, or eight years ago. The rest are thankful for her statement – she is a big act and she made a proper example for the rest of the industry.”

“We can’t come back to business as usual”

Hobbs said that many overseas acts would play Ukraine as soon as it was safe to do so, but questioned what the international touring sector’s future relationship with Russia looked like.

“I can’t imagine that… without real peace, any international act will play in Russia,” said Ziółkowski. “That would be absolutely impossible for me; it would be horrible and awful. I think that any moral person would never accept it… so I don’t see any way to come back to business as usual in years.

“I think that we all have to say very loud that there has to be changes. It can’t be that there is a stadium show in Moscow in three months and everything is fine, no, not any more. We can’t come back to business as usual. International touring has to be banned for a long time.”

Maletskyi said: “For me, as a Ukrainian, it’s obvious – no business with Russian acts at this stage. I understand that they will need to pay for this war for generations. I don’t know what they need to do, I don’t have this answer. But I feel pain about it. But we need to ban Russian touring at this moment, 100%.”

“It’s really hard to completely cut off oil and gas immediately – they will do it gradually, I think. But it’s really easy to stop international touring,” added Galperin, who encouraged festival organisers to include stages dedicated to Ukrainian artists.

Sildna suggested that festivals should not currently carry Russian programming out of respect for Ukraine, but added: “I think it is necessary to carry out a dialogue with people who we trust in Russia. And I think it’s important to support the opposition in Russia.

“Coming from the Soviet Union… the western connection to us back in the ’80s motivated us quite a lot to make these steps closer to democracy and closer to the west. So I think supporting the dissidents in Russia and supporting the opposition in Russia, is something we should consider doing in a smart way.”

The subject turned to the war’s impact on touring in bordering countries. Vulcu said there were indications the Romanian market had been affected.

“There are a lot of shows on sale, but the audience waits because there is a bit of a fear that this will escalate,” she said. “Many people say it won’t escalate because we are in NATO, but two months ago everybody said Putin will never get into Ukraine, so what can we say? We are not so sure.

“There is no two sides of the story. There might be misinformation in public… but there is one fact – Russia is in Ukraine and that’s very simple. They are on the Ukrainian territory, so it’s clearly one aggressor and one victim.”

“We have to support rebuilding Ukraine”

Ziółkowski claimed Russia’s actions amounted to “genocide”. “It’s not a conflict in Ukraine,” he said. “It’s Russian aggression and genocide.” However, he said he had no fears about the situation spilling over into Poland.

“We are absolutely safe, we are not afraid at all,” he insisted. “There’s 25,000 American troops on the Polish border. If something happened it means fighting with America and fighting with NATO, so it won’t happen. So don’t be afraid of Putin and don’t be afraid this bullshit they are talking to us. We have to support rebuilding Ukraine in our duty for their bravery, for the fight for freedom, for the fight for democracy.”

“If they find time to speak through music, then I think we need to acknowledge how powerful this medium is,” she said. “And I think it’s very touching and empowering to see that a sector that’s just coming out of two years of a pandemic crisis has been standing up all across Europe and the world and is making Ukraine visible. I think that’s something something we should embrace and take ourselves seriously as well.

“We have quite a lot of power in our voices if we combine them, so I think that’s something at least positive to take away from this.”